GoNintendo Feature: Is it time for Super Mario Galaxy 3?

Super Mario Galaxy 2 just celebrated a 10 year anniversary, which makes it the perfect time to talk about a follow-up! Will Nintendo ever do it? I certainly hope so, and I've shared some thoughts on why. As always, thanks for reading. 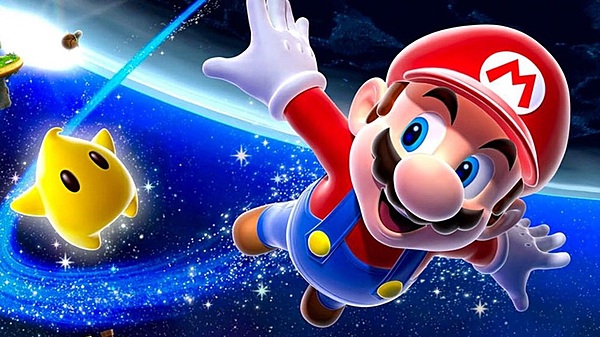 Looking back at the Super Mario Galaxy series shows us an unbelievable moment in Nintendo's history. While the GameCube did okay, the Wii absolutely blew it out of the water. The Wii captured the imagination of traditional gamers and millions of newcomers at the same time, making for amazing opportunities for Nintendo's biggest and best franchises. Nintendo wanted to make sure that their brightest stars appeared in games that not only reached both types of gamers, but really took advantage of the hardware as well. While fans wondered what would be next for Nintendo's brands, the lion's share of attention went straight to Mario.

Little did fans know what was waiting for them. The Wii brought us both Super Mario Galaxy 1 and 2, two titles that many fans would argue to be Mario's best games in his entire history. That's an argument that can be easily backed by all sorts of evidence. Super Mario Galaxy 1 and 2 gave us new ways to enjoy a Mario game thanks to the Wii Remote. Now you could point at the screen to interact with game worlds like never before. Reach out and grab a star, slingshot Mario into space, fire off starbits at enemies in your way, and even use motion controls to traverse tricky traps. Throw in some waggle for a spin attack, and both Galaxy games were tour de force

The controls were just the half of it, though. Super Mario Galaxy 1 and 2 took Mario games to the next level with a host of new gameplay features. Mario now had to work with the pulls of gravity, letting him jump in ways never before possible. Adjustments to in-game gravity made for unique platforming challenges that took a great deal of skill and finesse. Now you walk on top, around, and upside-down on your environments, letting you explore in ways never possible. Super Mario Galaxy 1 and 2 were titles where not even the sky was the limit. 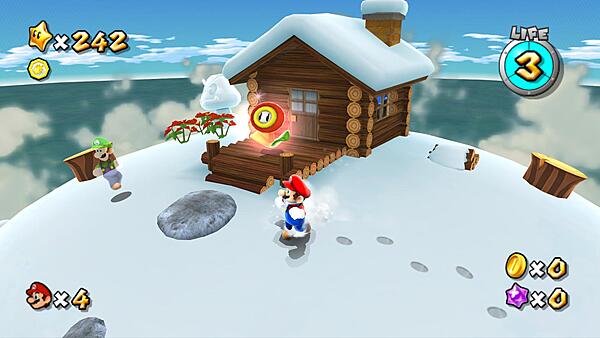 Nintendo even made sure to dial up the other aspects to 11 as well. Mario was accompanied by some truly unbelievable soundtracks, bringing in an orchestra for the first time. While there were still midi tunes here and there, the vast majority of the soundtrack gave us sweeping tunes on a scale unheard of in a Mario game. That fantastic music was matched by some impressive visuals as well. The Wii was not a powerhouse when it came to pumping out polygons, but what Nintendo did with both Galaxy titles really pushed the platform. Super Mario Galaxy 1 and 2 looked amazing, felt great to play, and gave us a litany of new things to do.

With all those impressive features and feats, there's one aspect above all others that pushed Super Mario Galaxy 1 and 2 to the upper echelon of gaming. Nintendo admitted that they let their developers run wild with ideas. Taking Mario out of the Mushroom Kingdom and into outer space allowed them to do things never done before in the series. There were no world constraints or gameplay limits. Whatever developers could dream up were on the table. This is actually what lead to Super Mario Galaxy 2. Nintendo stated that they simply had so many ideas left over from the first game that they thought they'd follow up with a sequel.

The combination of the Wii and Mario's new direction paved the way for not just two of the most memorable Mario games, but two of the best games the industry has seen. Two games that players still sing the praises of a decade later. Mario has had other adventures since then, and they've been glorious as well. Super Mario 3D World, while certainly pared down from what Super Mario Galaxy did, offers up an important marriage between 2D and 3D Mario games. Super Mario Odyssey followed, taking what Nintendo achieved with Super Mario 64 and really building upon it to create something special. Without a doubt, Mario is still going strong and delivering wonderful experiences. The question is, where does Mario go next? 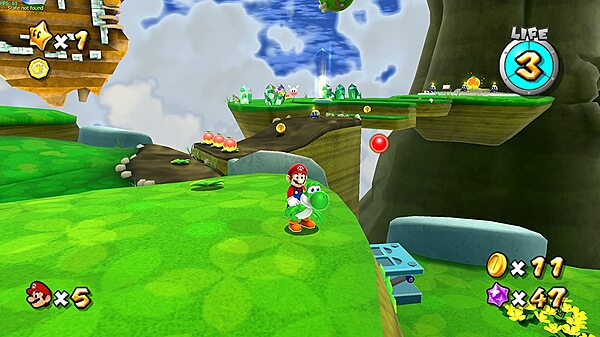 We know the next big Mario game is coming, but Nintendo hasn't shared insight into what it's going to be. Numerous fans were wondering why there was so little extra content added to Super Mario Odyssey, leading to speculation on a numbered sequel. If Nintendo was chock-full of ideas just like they were with Galaxy 1 and 2, there would certainly be reason to save those ideas for a Super Mario Odyssey 2, rather than just DLC for the original. There are millions of people who would want to dive into a numbered sequel for Odyssey, and no doubt the game would be a success.

The thing is, Super Mario Odyssey is still topping the sales charts. It keeps racking up the sales for Nintendo, and continues to grow its long tail. Nintendo never likes to cannibalize their games with new installments, giving them plenty of room to breath and grow. Super Mario Odyssey 2 could definitely shorten the tail of sales for the first game. Once people hear that sequel is on the way, a decent amount would most likely hold out for the latest, greatest Mario game. We all know that gamers have a laser focus on NEW games, and as soon as one of those titles is announced, the previous games lose at least some of their luster.

That's why an argument can be made for this being time for Super Mario Galaxy 3. Those original Galaxy titles aren't selling anymore, and the main hardware they released on has come and gone. Super Mario Galaxy 3 would no doubt catch the attention of Mario fans in general, gamers across the board, and even a smaller group of people who remember their Mario adventures from the Wii days. The potential outreach for a new Galaxy game seems like it could really explode, and thanks to the naming differences, it really doesn't seem like it would make much of an impact on Super Mario Odyssey sales.

Equally important, the Switch would be capable of recreating most, if not all of the features the Wii could do. The Joy-Con would allow for a control scheme very close to what the Wii Remote was capable of. Pointing would have to be handled virtually, and while it's not the best, it's still doable. As far as other motion controls, there would be no issue with that. The Joy-Con can replicate everything the Wii Remote could do for Super Mario Galaxy, and on a more sophisticated level. Some of those features and gameplay ideas are extremely important to making Galaxy 1 and 2 feel unique, and it's important to retain that approach for a third entry. 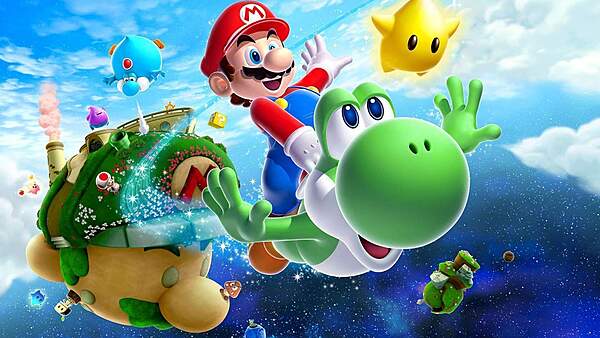 If there were ever a time for Super Mario Galaxy 3, it seems like now is that time. The Wii and Switch are similar in so many ways. Both platforms feature control schemes close to one another. Both platforms sold extremely well, and the Switch certainly has a chance at matching, if not surpassing the Wii. The Wii also reached an expanded audience of gamers, and while the Switch may not be on the same scale of expanded audience, it certainly plays host to the most unique install base for hardware right now. All the hallmarks and features are there, and it would be a shame for Nintendo not to capitalize.

Will Super Mario Galaxy 3 ever happen? That's not a question anyone outside of Nintendo fan answer. As to should it happen, I think most fans would answer with a resounding yes. No matter what mainline Mario game is announced, Nintendo fans are sure to be excited. That said, the reveal of a new Galaxy seems like it would be met with even more fanfare than your usual Mario game. With a decade past since Mario's last Galaxy adventure, it certainly seems like it's time for Mario to get out there and explore outer space once more. Hopefully Nintendo feels the same way.

Given the precedent I think Nintendo likes to move forward in regards to theming while having a small section alluding to older games. The galaxy games had levels with Piantas in it. 3D World had space worlds that alluded to the Galaxies music.

Oddysey referenced the original Donkey Kong in a big way.

Never say never, but it's something that will have an entirely different vibe, like how 3D Land and NSMB2 heavily referenced Super Mario Bros 3.

Mario Maker 1 and 2 reference Mario Paint and have elements directly from that game.

Super Mario Party tried to get back to the first 8 Mario Parties and it's just a different vibe.

Is like with Paper Mario, whenever if ever, it attempts to return with the partners and RPG mechanicas I can see people still be disappointed since the vibe is very different since Sticker Star. Is more a comedy of errors than a broad high fantasy adventure with dark undertones at places.

You may have something going on there. I wouldn't mind having another Galaxy like game but honestly, I'd rather they instead do something new like SMO rather than another one unless they can do something incredibly different.

I'd love a Galaxy 3. The first Galaxy is my all time favorite Mario game. That said, I don't expect to get a third. Nintendo is constantly moving on to new things in terms of themes. Galaxy 2 was kind of an unusual occurrence, a Nintendo sequel being so similar to its predecessor.

I'd just be happy with Galaxy 1 getting the HD treatment.

I liked the Galaxy games, but I'm not really hungry for more. For all the great and exhilarating things they did, they were still quite linear. I prefer the open-world feeling of games like Mario Odyssey and Mario 64.

Linearity isn't itself bad, there can be more focused levels. I did felt Odyssey feeling ever so empty after collecting a lot of Moons.

What I'd most like to see is a 3D Mario with the linear design of 3D World paired with the style and theming of Odyssey and Galaxy.