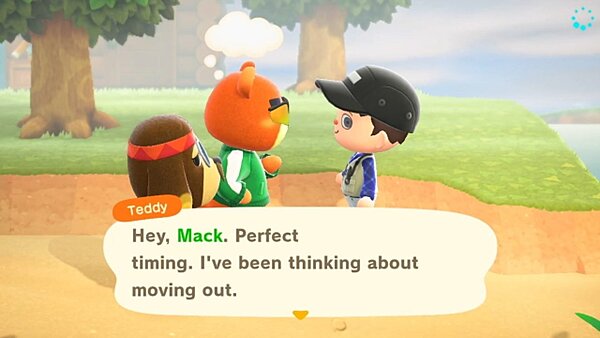 Every have an islander want to move out in Animal Crossing: New Horizons, and you're left wondering what you did wrong? Don't worry, it's totally not your fault. A lot of it has to do with random actions going on behind the scenes.

Dataminer Ninji has done some digging and came up with a bunch of details on just what prompts an islander to move away. Check out the details discovered below.

Players must have at least 6 Villagers on their island before any consider moving out.

On any given day, the percentage chance of a Villager asking to leave the island is determined by the formula “(V*5) + C” where:
“V” is the amount of Villagers players have
“C” is the number of days since the player last told a villager to leave or stay on the island (max 30).

There is a 5-day cooldown after telling a villager to leave or stay before this formula kicks in.

This can be skipped by resetting the game mid-conversation before telling the Villager to move or stay, the game will run the formula again the following day.

There is another 15-day cooldown after a villager officially leaves the island and frees up a housing plot.

If the above formula goes through, the game will pick a random Villager who will ask to move out

Each Villager’s chance of being picked is based on friendship levels, determined by another formula “((300-a) + r):
“a” is the average friendship the Villagers have with all island residents.
“r” is the amount of residents with >200 friendship.

Friendship values range from 0 – 255, and starts at 25, meaning that the chance to move out starts at 27, and goes down as friendship levels increase.

Villagers will be excluded from the move out chance if the following conditions are met:
House is being moved.
Birthday was within the past 7 days.
They were picked last time and told to stay.
Moved in the most recently.

Great, another week of waiting for Del to leave.

So the last one to move in to the town will NEVER ask to leave?

SWERY apologizes for the depiction of a transgender individual in Deadly Premonition 2, pledges to fix things
Jul 13, 23:49 by thedreaminghawk Jul 13, 23:36 by golfdude Jul 13, 21:50 by noxide
A closer look at Paper Mario: The Origami King's Samus, Donkey Kong, and Goomba paper mache heads
Jul 13, 23:24 by thedestructo94
Another round of unlabeled Switch game SKUs hit GameStop
Jul 13, 21:55 by wobblebobble
Switch firmware updated to Version 10.1.0
Jul 13, 21:37 by thedreaminghawk