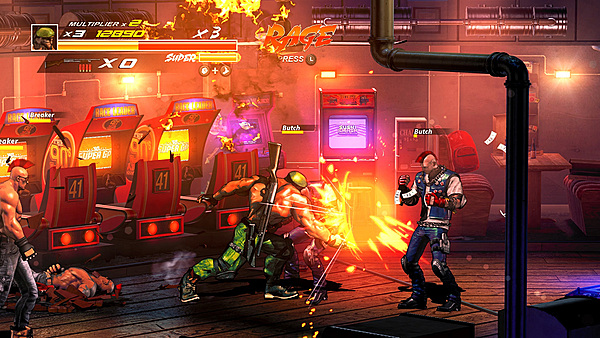 '90s Arcade Racer was announced all the way back in 2013, and was actually destined to hit the Wii U. The game eventually changed its name to '90s Super GT, but that's pretty much the last we heard of it. The game is yet to release on any platform, but the developer behind it is up to other projects.

Pelikan13 actually has a game coming to Switch quite soon. They're the team behind The TakeOver, a beat'em-up that's been in the works for quite some time as well. The game is due out on June 4th, 2020, and while it's the latest title from Pelikan13, it's clear the team hasn't forgotten their previous efforts.

As you can see in the screen above, one of the stages has you taking down bad guys in an arcade. In the background, you can see a '90s Arcade Racer / '90s Super GT arcade unit. Some fans are wondering if this is a hint at the game still being in the works, which it very well could be. On the flip-side, it might just be a nod to a project that never came to be.

UPDATE - The gang behind The TakeOver reached out to share an update. Their team said the following.

90's Arcade Racer is owned by Nicalis, and it's up to them when it will release

We have reached out to Nicalis for a statement on the matter. We'll update this post with more info if it becomes available.

Nicalis' handling of the situation being scummy is a gross understatement.

My heart goes out to Pelikan13 getting screwed over by them.

Nicalis has been outed as not only being owned by a racist CEO, but sitting on games for eons and taking on more than they can chew. They stole the rights to Mr Tako from the dev and won't let him make updates for the game, and it wouldn't be surprising if they took rights for 90S GP too.

Don't expect them to give any sort of update. their only major one last year was an april fools gag that insulted backers.

It's really too bad. 90s Arcade Racer was one of my most-anticipated Wii U games for years, and I kept clinging to hope it would come out someday... alas, it's just vaporware now.