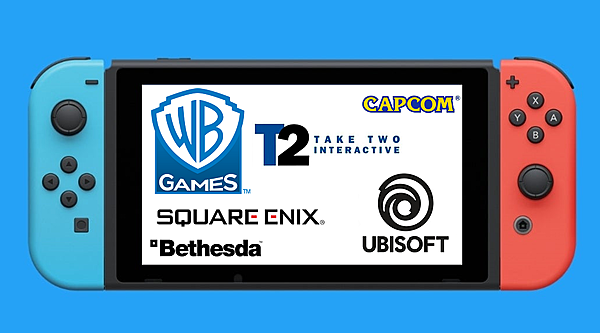 We're not quite sure what's going on at Amazon France right now. Either they've pushed a few listings live earlier than they should have, or there's a new wave of misinformation on the site. Overnight, Amazon France added the following listings for multiple publishers. The following list was discovered by Nintendalerts.

That's a lot of big-name publishers/developers, along with a lot of Switch support. As you can see, there are no specific games mentioned, which makes each listing that much more mysterious. Throw in the fact that we're close to what is traditionally E3 time, and you can see why people are getting excited! Let's hope these listings turn out to be true, and aren't just another mistake by Amazon.

Dear God I hope Ubisoft gives us something other Than Mario+Rabbids 2. The first one mainly sold on Mario being in the title. It was a complete bastardization of the charm of Mario replaced with Rabbids toilet humour. Feel free to disagree but I highly doubt it would have ever been a million seller without Mario.

I think people forget Starlink was Ubisoft and despite selling best of Switch it might have really killed their momentum on taking risks with the Switch.

I feel like they are constantly trying to do exclusive children aimed games on Nintendo platforms that don't take off rather than just giving us same games as other systems. Of course the power gap presents issues in doing that but still.

Oh it definitely wouldn’t have sold without Mario, but have to disagree with you on it being a bastardisation of that franchise. If it was a game that was just about Mario and had just Mario characters doing all that stupid stuff then I’d agree but it was largely the rabbids indulging in that behaviour while the Mario characters just acted like they’re known to do.


The reasonable part of me says this is going to be yet another port of a 10+ year old game, the dumb part of me always hopes Capcom tries to reboot Breath of Fire on the Switch.

It will for sure be the former, but im just trying to think of what else it could be, because it's most likely a PS3/360 era game again. I'd take Dead Rising for a reasonable price, I suppose.

for a reasonable price


That's not really how Capcom releases work on the Switch.

I would personally find $20 to be reasonable for Dead Rising, as thats what it is on other platforms, and its not unheard of with Onimusha and Okami being that price.