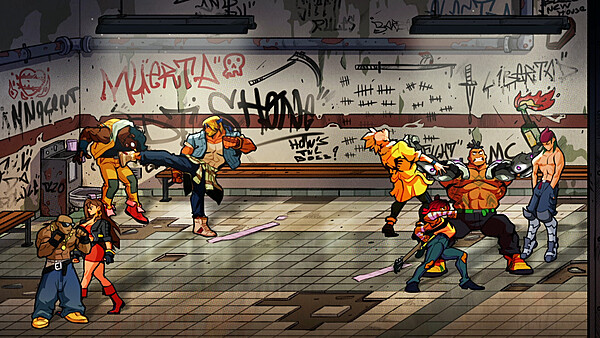 Streets of Rage 1, 2, and 3 all came out on the Genesis...and then the series hit a major roadblock. It took a very, VERY long time for the series to see a new installment. Just how on earth did the team behind Streets of Rage 4 manage to get SEGA to approve the idea? Cyrille Imbert and Jordi Asensio of DotEmu explained in an Nintendo Life interview.

Cyrille Imbert (DotEmu CEO and executive producer): In the '90s, I was definitely a Sega kid, so my first handheld console was a Game Gear. And when I got that console for Christmas, the first game I managed to get was Streets of Rage. I have very vivid memories of how rebellious I thought this game was and how crazy I was about it.

I told him “For the next project, I would love to try something crazy and do a sequel of Streets of Rage”. At that point he smiled

In 2017, after the success of Wonder Boy: The Dragon’s Trap, I was thinking about working on another SEGA franchise. One night in Paris I was talking with Ben Fiquet, the founder and art director of Lizardcube, the amazing studio behind Dragon's Trap. I told him “For the next project, I would love to try something crazy and do a sequel of Streets of Rage”. At that point he smiled and said, “that sounds like an interesting idea”, then pulled out his phone from his pocket and showed me those beautiful artworks of Axel, Blaze and other iconic characters of the series. This was definitely a sign!

We started to work together on a pitch and I flew directly to Tokyo to meet with SEGA’s team and give it a shot. A couple of months later, we had the final approval and the dream became reality. With that reality came pressure, but so much joy and excitement as well.

Jordi Asensio (Game designer, DotEmu): (The initial pitch) was not that elaborate, just a couple of pieces of artwork from Ben Fiquet along with the clear intent to make a true sequel, not just a remake. Also, we stated that we didn’t want to follow any modern gameplay trends; we wanted to stay true to Streets of Rage’s DNA and deliver a classic beat ‘em up experience.