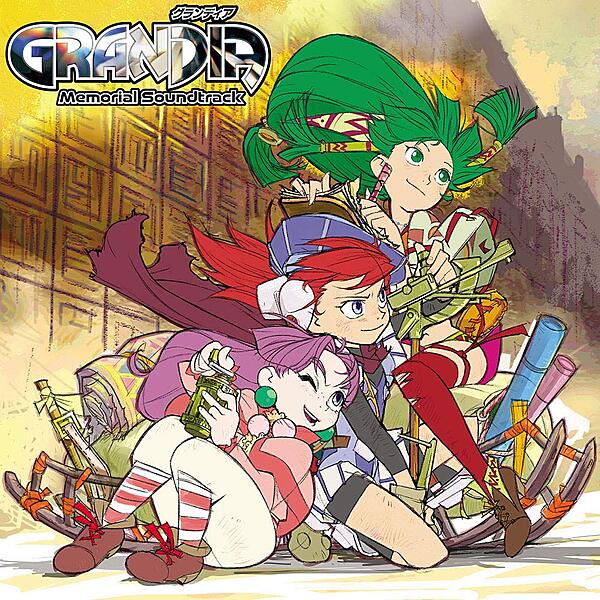 A few months back, we shared full details on the Grandia Memorial Soundtrack. The 3-album soundtrack, which comes in both regular and collector's edition, includes the following.

- Three 180g vinyl discs, with exclusive "Saturn Marble Green" colors and entirely remastered for the vinyl format.
- Each Disc is housed in its own illustrated sleeve.
- A completely new 24-page booklet, featuring Toshiaki Hontani and Takuhito Kusanagi’s gorgeous artworks and new comments from the development team (Toshiaki Hontani, Kazuyuki Ôhata), the soundtrack producer (Isao Mizoguchi) and composer Noriyuki Iwadare. Learn never heard before details about the birth of the game!

In addition, the arrange album of 1998, Vent, out of print in Japan for years, entirely arranged and performed by Noriyuki Iwadare and his best musicians, is included as a supplement to the original soundtrack, on an additional disc!

The Collector's Edition includes the Piano Score of the main theme, and a Shikishi featuring a completely original illustration by Toshiaki Hontani, along with all the previously-mentioned items.

While fans are already locked in preorders for this album, there's been no word on when it'll actually ship, outside of a vague Summer 2020 mention. While we still don't have official confirmation on a release date, we can see that Amazon has updated their listings to show an Aug. 21st, 2020 date. Seems like an oddly-specific date just to use as a placeholder! We'll reach out to Wayo Records and try to get confirmation on this info.