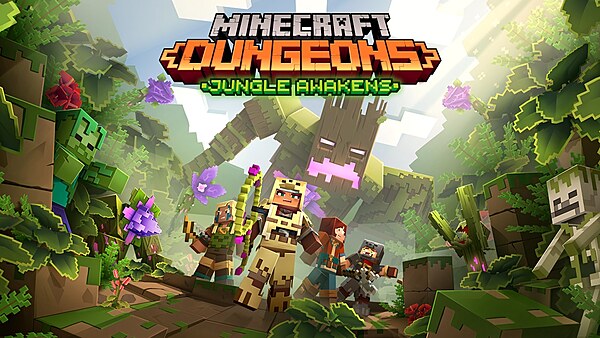 Screenshots can be found here!

Last month, Mojang Studios released Minecraft Dungeons. Have you played it yet? I have and quite enjoyed it, even though it’s obvious that the team didn’t use any of the notes that I have been continuously submitting. I might believe that they didn’t get my emails and phone calls, but how could they miss the carrier pigeons I sent to their home addresses? I’m not saying that they had to change everything to center around yours truly, but a few references wouldn’t have hurt.

One thing they did add was more shrubbery, vines, and humidity. Foliage as far as the eye can see. Oh, and a bunch of new weapons, armors, artifacts, and mobs. And three new story missions! Aaaand a free update, which includes the Lost Temple dungeon, some new items, and a few game balancing changes. Phew! I’m out of breath and I haven’t even gotten to the pandas yet.

That’s right, the first Dungeons DLC is on its way! Jungle Awakens will be released on July 1, so get ready to battle new mobs such as the Leapleaf and Whisperer before ultimately saving the day by defeating the Jungle Abomination. For those of you who already bought the Hero Edition, all of this is included! Don't worry, you can always upgrade your standard game with the Hero Pass. Hooray! Sorry, I mean hero-ay! What, you think that’s a bad joke? I don't have time to craft my usual high-quality puns for you because I have a jungle outfit to perfect and pandas to admire from afar.

Fiiiiine, I’ll leave you with one little treat to tide you over until the DLC drops. We have recently released the Dungeons soundtrack so you can get in the mood even when you’re not playing the game! Or put it on as you play it, for that authentic dungeon echo. It’s up to you, just like which platform you enjoy your tunes on! Personally, I only listen to the harmonies of my mechanical keyboard but the rest of you can find the Dungeons base game soundtrack on Apple Music or on Spotify. Just because I like you so much and to make up for the horrible joke in the last paragraph, I’ll throw in the Apple Music and Spotify links to the Jungle Awakens soundtrack too. Let’s all agree to choreograph our own dances to it by the time the DLC is out, OK? Don’t leave me hanging, even if it is from a vine.