A jam-packed summer of games awaits you on Switch 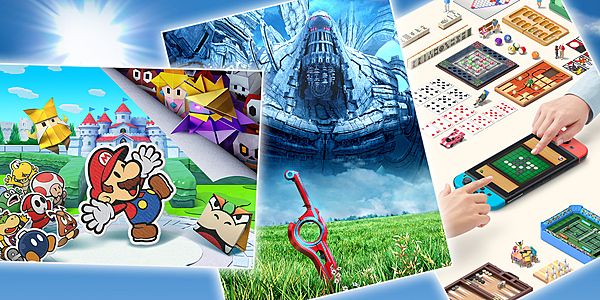 This summer is looking mighty busy on Nintendo Switch, with games for every type of player! Whether you’re ready to save the Earth from an alien invasion, or looking to set out on your next epic quest – you’re bound to find something you’ll enjoy.

Take a look at some of the games that are available on Nintendo Switch this summer!

Fight your way through an all-new action-adventure game, inspired by classic dungeon crawlers and set in the Minecraft universe! Up to four players* can battle together through action-packed, treasure-stuffed, wildly varied levels – all in an epic quest to save the villagers and take down the evil Arch-Illager!

The lunch rush is on! Run and build up your very own eatery with Pokémon Café Mix, a free-to-start puzzle game, available to download on Nintendo Switch. In this handheld experience***, take the orders from your Pokémon customers and craft tasty treats, by completing satisfying icon matching puzzles!

Clear the table and settle down with friends and family to enjoy a diverse collection of timeless favourites, in person or online*, in 51 Worldwide Games. From ancient board games to modern classics, relaxing solitaire games to fast-paced toy sports, experience the games that have shaped cultures around the world!

Join Mario and his new companion Olivia on a comedic adventure that will take you to the far corners of a papercraft world in Paper Mario: The Origami King! Face off against an army of paper invaders, team up with some extraordinary companions and master magical powers on your quest to save the world.

The Wonderful 101: Remastered – out now!

Team, Unite Up! The Wonderful 101: Remastered offers the unprecedented ability to control 100 heroes at once, with the flowing controls and dynamic action that are the PlatinumGames hallmark. A team of heroes from around the world must UNITE to protect the earth from vicious alien invaders!

Assume the role of a modern-day ninja and take part in the Ninjala tournament in Ninjala! Take part in Battle Royale-style matches of up to eight players*** and vie for supremacy with ninja around the world. Score points by defeating your opponents, obtaining items, destroying drones positioned across the stage, and more.

The Outer Worlds – out now!

Become an employee of the Halcyon colony in The Outer Worlds – a first-person sci-fi RPG from Obsidian Entertainment and Private Division. Lost in transit while on a colonist ship bound for the furthest edge of the galaxy, you awake decades later than you expected only to find yourself in the midst of a deep conspiracy threatening to destroy the Halcyon colony.

Our indecisive protagonist, Vincent, has been with his long-time girlfriend, Katherine, for five years. But instead of taking the next step into marriage, Vincent finds himself in an affair with the provocative blonde bombshell, Catherine! This mature action-adventure puzzler will thrill players with a story that delves into relationships and the difficult choices we make.

Mortal Kombat is back and better than ever in the next evolution of the iconic franchise! The all new Custom Character Variations give you unprecedented control to customise the fighters and make them your own. Mortal Kombat 11: Aftermath features a brand-new cinematic story where players will have to decide who they can trust and who they must defeat with fate on the line.

Deadly Premonition 2: A Blessing in Disguise – out now!

The cult classic mystery thriller returns! Set both nine years after and five years before the original game, Deadly Premonition 2: A Blessing in Disguise features not one, but two protagonists. Lead them to discover an astonishing truth that will send both to the brink of madness.

BioShock: The Collection – out now!

Experience the unforgettable worlds and monumental stories of the award-winning BioShock series with BioShock: The Collection. Journey to the cities of Rapture and Columbia across BioShock Remastered, BioShock 2 Remastered, and BioShock Infinite: The Complete Edition, including all single-player add-on content.

Get three times the mayhem, three times the loot, and three times the action with the Borderlands Legendary Collection! Kill bandits and beasts, collect powerful weaponry, and maybe even save the universe in Borderlands: Game of the Year Edition, Borderlands 2, and Borderlands: The Pre-Sequel, along with piles of bonus add-on content for each game. Enjoy all three games solo or cooperatively with local two-player split-screen**** or four-player online play*.

As the leader of a guerrilla force facing impossible odds, you must ignite a global resistance to eliminate the alien threat and save the human race from extinction. The XCOM® 2 Collection includes the award-winning strategy game XCOM 2, four DLC packs (Resistance Warrior Pack, Anarchy’s Children, Alien Hunters, Shen’s Last Gift) and the War of the Chosen expansion all in one package.

Ahaha, you're not the only one.