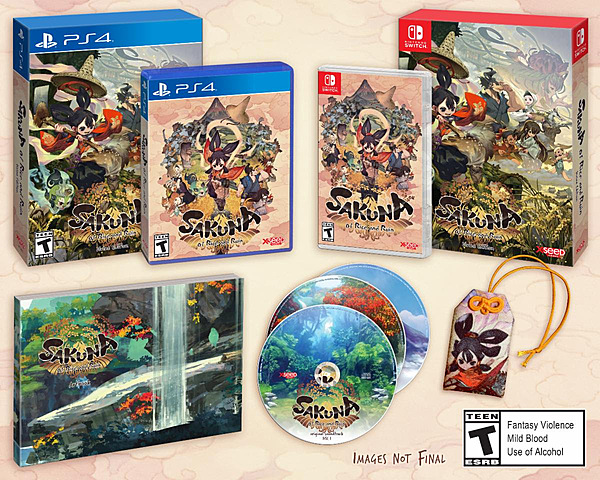 XSEED Games, the independent-minded publishing brand of Marvelous USA, Inc., has revealed a special retail edition for the upcoming Action/Simulation game developed by the 2-man team at Edelweiss, Sakuna: Of Rice and Ruin, launching later in 2020 for the PlayStation®4 computer entertainment system, Nintendo Switch™, and Windows PC. Sakuna: Of Rice and Ruin will release with two retail editions for PS4™ and Nintendo Switch™; a standard retail release priced at $39.99 and a special “Divine Edition” priced at $59.99. Both versions will be available for pre-order soon on the XSEED Games Store and participating retailers.

The special “Divine Edition” for Sakuna: Of Rice and Ruin is fit for a young goddess, coming wrapped in a custom outer box with exclusive artwork. Inside will be the retail edition of the game on the respective platform, a large 8.2” x 5.8” artbook with over 130 pages of illustrations and concept art from the title, a full OST of 42 songs on 3 CDs, and a special 2” x 3” Japanese omamori charm to bring owners good luck in combat and farming.

Detailed 3D Simulation-style Gameplay‒ Learn the ancient art of agriculture by following detailed steps from planting to harvesting to cultivate the perfect crop. As a harvest goddess, Sakuna’s strength grows with each successful rice crop, with attributes such as aesthetic and flavor directly correlating to her combat abilities.

Creating a Home in the Wilderness‒ Sakuna’s mortal companions make weapons, armor, and meals for her using the materials and ingredients she gathers on her adventures, and completing quests for them will unlock even more options.

A Fresh Take on Japanese Mythology‒ The heroine is part of a pantheon of gods and demons inspired by traditional Japanese mythology but featuring many unique twists. The story and world are filled with lovingly rendered details, some familiar and some completely original.

Developed by Edelweiss and to be published for the Nintendo Switch™ system and PS4™ system in North America and globally on Windows PC by XSEED Games, Sakuna: Of Rice and Ruin will launch in all available territories in 2020. The retail game will be available for pre-order soon in a standard and limited “Divine Edition” for $39.99 and $59.99, respectively, on the XSEED Games Store and participating retailers. The title has been rated “T for Teen” by the ESRB for all three platforms.