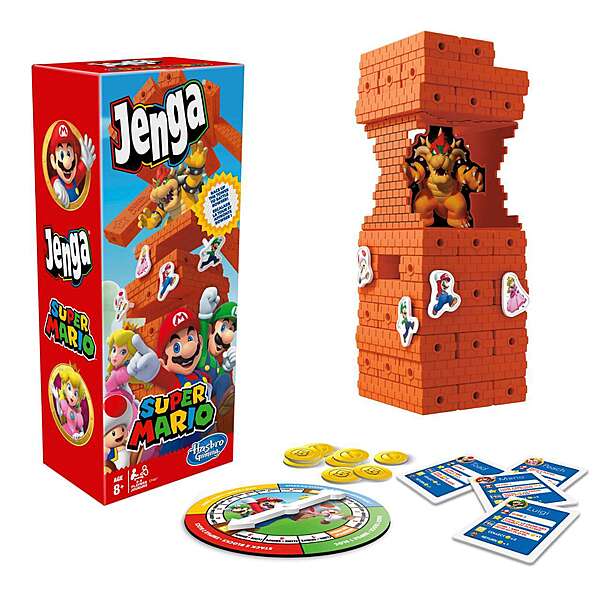 While we wait for Nintendo to announce their plans for Mario's 35th anniversary, Hasbro has already revealed theirs. The company has two new Mario-themed versions of their popular board games in the works. Both Jenga and Monopoly are getting the Mario treatment, and you can get details on both below.

- race up the tower as Mario, Luigi, Peach, or Toad to defeat Bowser at the top
- each character has a corresponding card that players can refer to to throughout the game
- players earn points by collecting coins as they stack, steal, and climb
- it the tower falls on a player's turn, they'll lose coins and their chance to be the hero
- due out August 1st, 2020 for $20

"Spin the spinner to find out the next move: How many layers to climb, how many blocks to remove and stack, whether to collect coins, or whether the game will reverse directions. It's a battle to the top as players move their own pegs up and their opponents' pegs down, all while trying not to make the tower crash." 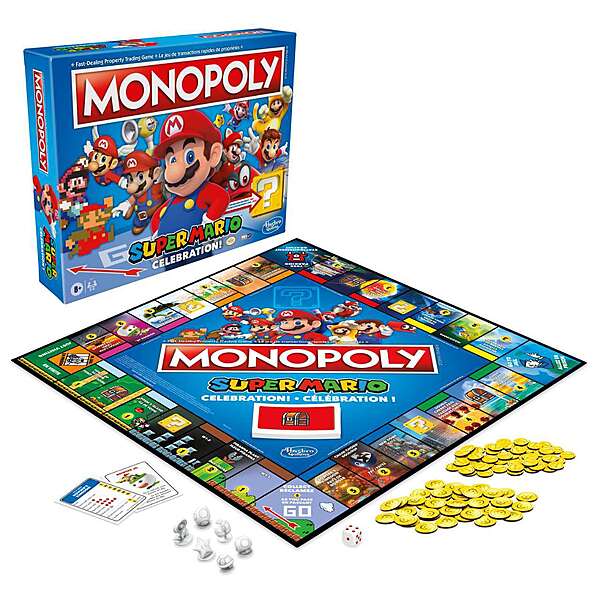 - features locations from iconic Super Mario games that range from 1985 to the present day
- Toad houses and Princess Peach's castles replace houses and hotels
- includes an electronic Question Block with sound effects "that can change a player's luck"
- due out August 1st, 2020 for $30

Not sure why everyone hates Monopoly, it's my favorite board game. It would be cool if they updated the Ubisoft monopoly game with a Mario board on Switch. Hopefully this version is well made and not on cheapo cardboard.

Both of those look pretty neat!

@steeldiver
I don't think many people hate monopoly, but once you own it you don't really need to keep buying other versions of it. I do know people complain about the length of the game though

I love Monopoly, but I hate playing it against real life people. I prefer to bankrupt and destroy CPU-controlled players.

And I like the design of this new Mario Monopoly. It blends from the 8bit days to modern days in clever ways. And the properties are LOCATIONS, which is good. I hate the idea of charging rent for a mushroom like in the last version...

And that Jenga looks a lot like the Donkey Kong Jenga they made several years ago. I wonder if it's very fun.

I own Monopoly Gamer: Super Mario Edition, the properties are worlds and levels from New Super Mario Bros. U.

I wasn't sure if any of my non-gamer friends would like to play it, but we played once and now they want to play it again.

But yeah, having this Monopoly, I don't think I need another one, not even if it's a Monopoly Kirby or Monopoly Metroid.

Honest to god, that monopoly box just confirms the remaster rumors to me. 64, Sunshine, Galaxy, and 3D World are all on that box... along with other games the Switch currently has. I suspect that the announcements for 35th are incoming!

For me, the only way to go with Mario-themed Monopoly-likes is Fortune Street.

Still, that Jenga one looks like an interesting twist. I wish they would switch up the artwork, though, rather than using the same renders over and over. That's clearly SM3DW art.

I'm very, very bad at Jenga, but it's a super fun game!

Yea we’re definitely getting that direct on Monday

Is this the plan for the Super Mario 35th anniversary?

A tiny part of a plan that is already in action