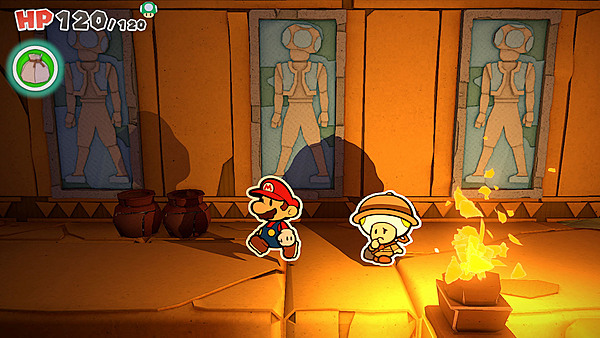 A new interview with the Paper Mario: The Origami King dev team has given us a very rare look behind the curtain at Nintendo. A lot of fans have had questions about the direction of the Paper Mario series in recent years, and the tidbits shared in this interview certainly give some insight.

VGC talked to Nintendo EPD/Assistant Producer Risa Tabata to find out why Paper Mario games have been taking the direction of introducing new gameplay mechanics in recent installments, rather than being straightforward RPGs. Here's what Tabata had to say.

The philosophy of game creation that Mr Tanabe learned from Mr Miyamoto, and that in turn he’s imparted to me, is to challenge yourself to create new gameplay. Games are entertainment, so I want the people who play our games to say “Wow!” My understanding is that if we want to give players these positive surprises, we can’t do exactly the same thing that’s been done before.

Nintendo doesn't want to just create new mechanics though. They want to make sure Paper Mario games are welcoming to all. Later in the interview, Nintendo's Kensuke Tanabe elaborates on this.

First, Nintendo’s philosophy on game creation is that we don’t ignore casual players in creating our games. This is also true for games such as those in the Metroid Prime series; games that at first glance look like they are only aimed at core gamers. With that in mind, what we’ve done in the Paper Mario series is to put a lot of work particularly into the puzzle solving elements of the games, so that they can also be enjoyed by core users.

So, for example, in Paper Mario: The Origami King, players need to guess the weak points of bosses based on their characteristics and search for the solution to defeat them, otherwise they won’t be able to win these battles.

This is an adventure game after all, so it wouldn’t be right if the battles didn’t also have some kind of puzzle solving element! (Of course, we’ve also added in a system for casual players where they can use coins in battles to get help from the spectating Toads.)

However, I do think it’s difficult to satisfy certain fans with the adventure game direction if they think of Paper Mario games as simply being RPGs. I hope that everyone will play this game with an open mind.

This approach to casual players applies to storylines in the games as well. The efforts in recent games has been to create stories that aren't too cluttered, and stick close to the Mario universe. Tanabe shares his thoughts on that below.

In Super Paper Mario, the elaborate story led the game away from the Mario universe, so since Paper Mario: Sticker Star I’ve refrained from using stories that are too complicated. Personally, though, I like games with stories. During the production of The Legend of Zelda: A Link to the Past, we made use of a system for character settings and real conversations in order to build the story, which was a first for a game in a series. (I also wrote the text for this game.)

To go back to Mario, in Paper Mario: Color Splash, I avoided having a complicated story so as not to veer too far away from the Mario universe, and instead aimed for a game with more memorable events. To create even more memorable experiences for players, in Paper Mario: The Origami King we’ve established some characters other than the partner character who will also journey with players through the game. In particular, I think that Bobby (Bob-omb) has turned out to be just as memorable a character as Olivia.

My understanding is that if we want to give players these positive surprises, we can’t do exactly the same thing that’s been done before.

You made Sticker Star three times!

I can almost see where he’s coming from with not wanting the story to be overly complicated. An obsession with plot twists, backstories, and retcons has made Kingdom Hearts incoherent nowadays, and I say that as a huge fan of the series. But I never felt that was an issue with Paper Mario games, and it sucks how he singles out Super Paper Mario in particular as that game’s story was many people’s favorite thing about it. And it being so different from a standard Mario setting was part of what made it so interesting.

"Less than 1% in the survey found the story interesting"

It's funny how this basically comes down to keep the quality writing, but make the stories straightforward. Color Splash despite being predictable and traditional has quality writing, is just that instead of unfolding an interesting story, is just establishing how Bowser ended with the black paint.

Atleast he's aware that there's a fanbase that wants Paper Mario being back to RPG. So who knows?

Nintendo always talks about trying new things, they should try making a new series with the style they no longer use. I don't mean another Nintendo Ip, but a new RPG series with the systems of the old games.

Oh for sure. I think at this point we should see a Paper Mario platformer instead of it being RPG. That can be a fresh concept.

Or...they can just call Squenix to make them a Mario RPG like they did in the first place.

It sucks to see them talk about Super Paper Mario like it was a misstep for the series. That was a game that ACTUALLY had a lot of amazing surprises in it. There's no "positive surprises" in a Paper Mario game that's exactly what it says on the tin, just all the generic Mario enemies in a world that happens to be made of paper.

"...we can’t do exactly the same thing that’s been done before. "
Good philosophy. Games need to completely change their genres to be better. It's the same reason Zelda 2 is the most beloved entry in the series. Can you imagine how bad the Zelda games would have gotten if they went back to action genre of the first game? Thank God Mario Odyssey wasn't a platformer! It would have been a huge mistake going back to the tired old 64 formula of collecting celestial bodies in non-linear fashion. Metroid was better as a full-on FPS and soccer game. There's a reason Prime Hunters and Federation Force are the most beloved and acclaimed Metroid games, Retro got it absolutely wrong trying to keep the spirit of the 2D games. Star Fox Adventures was a great game, every attempt afterwards to return to an on-rails shooter has been worse and worse...Fuck, that last part may actually be a bit true😅

I had no problem with Federation Force because it was a spin off. Spin offs are a fine way of experimenting with the series. I encourage it all the way. But these new Paper Mario games are not spin offs they're the next step in the mainline series. If we got a normal Paper Mario along with a game like Sticker Star, that would be fine.

My understanding is that if we want to give players these positive surprises, we can’t do exactly the same thing that’s been done before.

You made Sticker Star three times!

I knew it. Super Paper Mario was the jumping the shark moment. Lol

Can Miyamoto please retire already? He hasn't done or said anything good after creating the first Pikmin. And take that Tanabe guy with you while you're at it.
The first three games were quite memorable but I can't remeber anything from Sticker Star or Sticker Star 2.