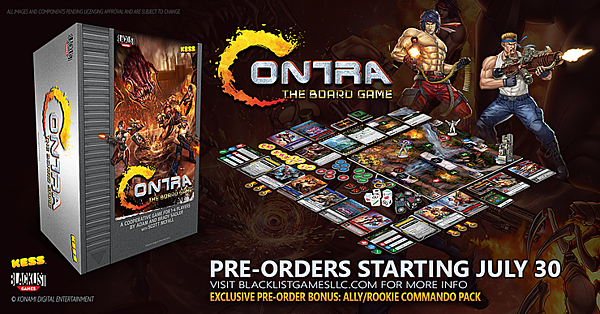 The Red Falcon Army has reemerged, and now it’s time to return to the fray and bring them down all over again. You have been selected from among the most qualified Contra commandos, and now the fate of the world lies in your hands. Your mission? Infiltrate, eliminate, and survive.

Blacklist Games, in conjunction with Kess Co., is thrilled to announce Contra: The Board Game, a cooperative game of run-and-gun action for 1–4 players set in the world of Konami’s iconic Contra video game series. Designed by Adam and Brady Sadler (Street Masters, Heroes of Terrinoth), Contra: The Board Game casts players as elite Contra commandos tasked with thwarting the Red Falcon Army’s plans of world domination!

Each game of Contra: The Board Game is a race against time as commandos attempt to navigate hazardous environments and attack the many minions that stand between them and their target: a deadly boss that must be destroyed at all costs. Luckily, they’ll be able to locate advanced weaponry and accomplish various objectives out on the battlefield in order to gain the advantage! Furthermore, they’ll be able to use their unique cards and abilities to blaze a trail through the enemy each turn. However, attempting to “run n’ gun” can come at a cost, exposing them to enemy attacks if done carelessly. Will they push their luck and hope to come out on top, or will they play it safe while the clock continues to count down?

Featuring fast dice and card-driven gameplay, highly-detailed miniatures, and a variety of modular fixed decks for commandos, enemies, and stages that can be mixed and matched to create unique scenarios, Contra: The Board Game lets players create their own exciting Contra adventures on the tabletop!

Contra: The Board Game is for 1-4 players, ages 14 and older, and has a play time of approximately 45-120 minutes. It includes 8 highly detailed miniatures; over 200 cards to make up 4 unique Commando decks, 4 unique Enemy decks and 4 unique Stage decks; 20 objective cards; 5 custom Hero dice; 5 custom Enemy dice; many tokens and 2 double-sided, folding stage boards depicting the harsh battlegrounds in which Contra will face the Red Falcon Army!

Contra: The Board Game is expected to be available for pre-order via blacklistgamesllc.com on July 30, 2020, with an estimated release window of Q1/Q2 2021.