One battle could ruin your whole game
03 August, 2020 by rawmeatcowboy | Comments: 1 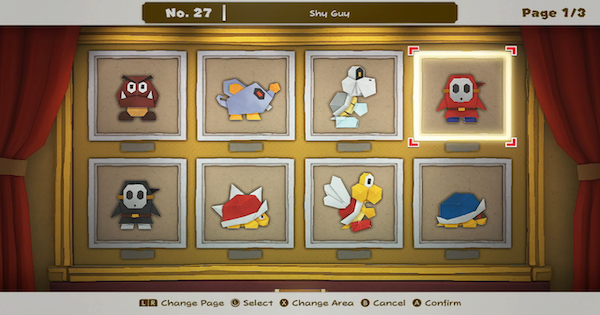 There's a glitch in Paper Mario: The Origami King that will stop you dead in your tracks if your goal is to get 100% completion in the game.

At one point during your journey, you'll be asked to take down two black Shy Guys. They only appear once, as it's a story portion of the game. If you battle them and win, all's good and they'll be added to the tally of your defeated enemies. If your partner at the time, Captain T.ode, lands the final blow and defeats the black Shy Guys for you, the game will never add the enemy to your compendium. This means you'll be unable to get the 100% completion goal without starting over completely.

This obviously isn't a huge glitch, but if you're someone trying to 100% the game, it can completely ruin things for you. Hopefully Nintendo addresses this issue with a patch in the near future.

Thanks to Monty_Mole for the heads up!
Submitted by: monty_mole
Source: Link
Rating: 1