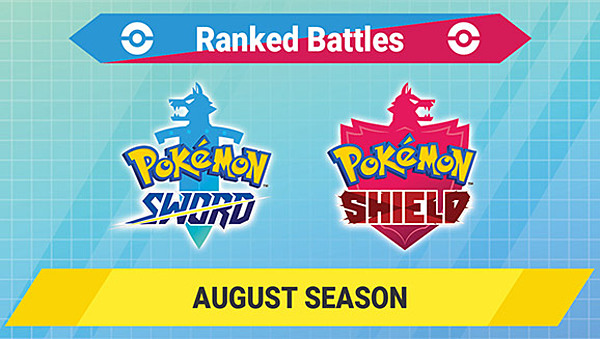 The latest season of Pokémon Sword and Pokémon Shield Ranked Battles has begun, and this month is a great time to show off how you've developed your strategies. The battle rules are the same as in July, so use what you've learned from the first round of battles with Pokémon from the Isle of Armor. Test your skills in head-to-head battles against players around the world to move up the leaderboards and earn in-game rewards.

Pokémon in either the Galar Region Pokédex or the Isle of Armor Pokédex that are caught, hatched from Eggs, or received as an official Mystery Gift are eligible for Ranked Battles, except for Mythical Pokémon and most Legendary Pokémon (Cobalion, Terrakion, and Virizion are permitted). Competitors will be permitted to use all known Pokémon with the Gigantamax Factor, including Venusaur, Blastoise, Rillaboom, Cinderace, Inteleon, and Urshifu. Pokémon of permitted species with the battle-ready symbol may also be used in Ranked Battles.

To start a Ranked Battle, select VS in the X menu, select Battle Stadium, and then select Ranked Battles. You can press the Y Button to see an overview of Ranked Battles before you begin your match.

Before battle, you'll be matched up with other players of similar rank to ensure even competition. When the season concludes, the higher the tier you finish in, the greater your in-game rewards. The August season rewards include the following:

Good luck making it to the Master Ball Tier as you battle in August, Trainers!