Looking for something to watch?
07 August, 2020 by rawmeatcowboy | Comments: 0 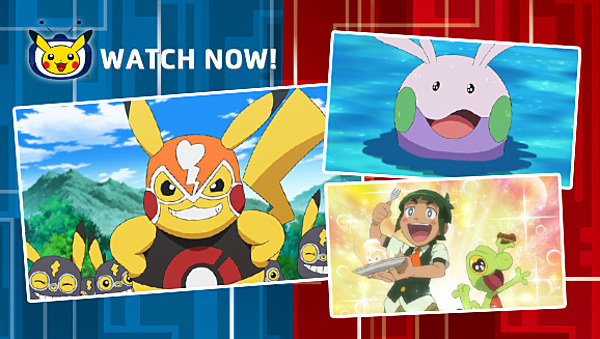 Ash, Serena, Clemont, and Bonnie's epic adventure through the Kalos region continues in Pokémon the Series: XY Kalos Quest, which has just arrived on Pokémon TV. This 18th season of the beloved series sees Ash continuing his quest to win eight Gym badges so he can enter the Kalos League. Meanwhile, his traveling companions have goals of their own to accomplish. Along the way, they're bound to make even more new friends, forge new rivalries, and meet some new Pokémon. Before you settle in to watch the whole season, check out some of the exciting events that you have to look forward to. Then, tune in to Pokémon TV to see the whole story!

Throughout Pokémon the Series, you can count on Ash making loads of new friends, but there are also plenty of rival characters looking to defeat him in battle. XY Kalos Quest is no exception with its introduction of Sawyer and his partner Pokémon Treecko. We first meet this young Trainer as he faces off against Clemont at the Lumiose Gym (“Battling with Elegance and a Big Smile!”). Sawyer doesn't meet Ash until several episodes later, however (“A Fashionable Battle!”). As a Trainer, Sawyer is very analytical, and he takes ample notes about his battles in a notebook in order to study and improve his skills. He even studies Ash's battles to hopefully learn from his new rival (“Fairy-Type Trickery!”). He does have a battle against Ash before setting off on his own adventures, but this will hardly be the last we see of Sawyer (“Rivals: Today and Tomorrow!”).

One of the best parts of Pokémon the Series is seeing Pokémon evolve. Whether it's one of Ash's Pokémon or a partner of one of his friends or rivals, there's usually something cool that triggers that Pokémon's evolution. This season is filled with these moments. You'll see Ash's Froakie take an important step when it evolves into Frogadier (“A Stealthy Challenge!”), and our hero's Fletchinder evolves into Talonflame (“A Legendary Photo Op!”). Ash's friends also get some changes on their teams when Clemont's Luxio evolves into Luxray (“The Future Is Now, Thanks to Determination!”), and Serena's Fennekin becomes Braixen (“Battling with Elegance and a Big Smile!”). Even some rivals and villains get in on the action. Sawyer's Treecko evolves into Grovyle (“Rivals: Today and Tomorrow!”), and Jessie's adorable Pumpkaboo becomes a spooky Gourgeist (“A Festival Trade! A Festival Farewell?”).

Speaking of evolutions, Ash makes another Pokémon friend this season that goes through an impressive character arc. Shortly after Ash meets the little Dragon-type Pokémon Goomy, Team Rocket swoops in and swipes Goomy along with Pikachu. Although it was scared at first, Goomy finds the strength to fight back and free Pikachu. As our heroes battle Team Rocket, Goomy is impressed by Ash's devotion to his Pokémon and decides to join his team (“A Slippery Encounter!”). Poor little Goomy is frightened by some other Pokémon due to some traumatic events from its past (“Defending the Homeland!”). However, as it battles alongside Ash, its confidence begins to grow, and it eventually evolves into Sliggoo (“An Oasis of Hope!”), and then Goodra (“Good Friends, Great Training!”). Goomy—well, Goodra's story, reaches its climax when a sinister Team Rocket plan is uncovered, and Goodra must decide the best way it can help its friends (“Beyond the Rainbow!”).

Multi-episode story arcs are great and all, but sometimes it's fun to take in a silly episode that is mostly separated from the overall plot. “Lights! Camera! Pika!” is an enjoyable bit of goofiness that will delight the audience—especially Pikachu fans. During their travels, Ash and friends meet Frank, a film director that dreams of making a blockbuster movie about the beloved Electric-type Pokémon. Frank lives with a bunch of Pikachu that love wearing elaborate costumes as they feature in his films. The director thinks Ash's Pikachu would be perfect to play the part of Super Pikachu in his upcoming movie. As the hero of the story, Pikachu will battle to save Pikachuland from the evil Pikachu Libre. Of course, everyone gets bit by the moviemaking bug, and Ash and his friends all help Frank out in making his dream a reality!

It's not unusual for a season of Pokémon the Series to end with Ash taking part in a dramatic battle, and in XY Kalos Quest, our hero arrives at the Anistar Gym to face off against Gym Leader Olympia. Professor Sycamore has also arrived to study the mysterious Anistar Sundial. Olympia may specialize in Psychic-type Pokémon, but she also appears to have psychic abilities of her own! She has a vision of a bright future for Ash and his Frogadier (foreshadowing!) and great danger involving the sundial (“Cloudy Fate, Bright Future!”). Ultimately, Olympia and her team of Meowstic take on Ash and his Pokémon in an exciting Double Battle. But once the match concludes, the Gym Leader warns of a future crisis that threatens the entire Kalos region (insert a dramatic “DUN DUN DUNNNNN!” here) (“All Eyes on the Future!”).

Even with all this action, these are just a few of the incredible adventures that Ash, Pikachu, and their friends find themselves in during Pokémon the Series: XY Kalos Quest. Turn on Pokémon TV and watch the entire season! Remember that you can load up the Pokémon TV mobile app and enjoy these classic episodes on the go!