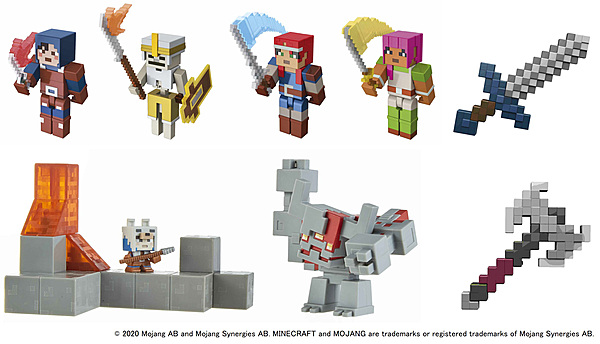 Minecraft Dungeons has been extremely well-received since launch, finding a spot in the 10 top eShop charts since it released. Being a spin-off of the hugely popular Minecraft series certainly helps! You can bet that success has other companies itching to tie themselves to the brand, and it appears that Mattel is the first to land a deal.

Mattel has a line of Minecraft Dungeons toys that are set to release in Japan sometime in mid-August 2020. The lineup includes a handful of action figures, a special Battle Pack that includes a hero, enemy, and a lava scene, and two different life-size Minecraft Dungeons weapons that made sounds when you swing them. You can see each of those items in the picture above, or check out individual images of each here.