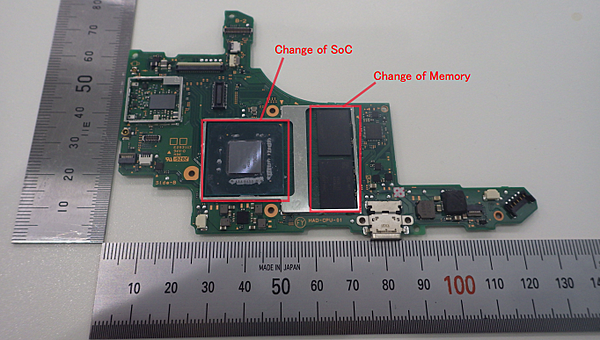 There have been rumors of a more powerful Switch for years now, and they ebb and flow with time. Right now we're seeing the rumor flames get stoked once again, thanks to reports from outfits like Bloomberg and others. They say their info comes from inside sources and people close to the matter, but it's all still just rumor. It can be a bit taxing to not have something tangible to go off of, but today that finally changes.

Some new FCC filings tied to Nintendo have popped up, and it does indeed look like the Big N is working on a Switch hardware revamp. According to the filings, a Switch with an updated SoC (system on a chip) and RAM is definitely on the way. These filings were just made public a few days back on Aug. 23rd, 2020. There's also a change of the CPU board, but that's due to the new components mentioned above.

Now as to why Nintendo needs these changes and what the difference is between the current Switch and this revamp remains to be seen. There has been talk of a Switch with more horsepower and a better resolution, and upgrades like the ones mentioned above would certainly fit in with these revamped innards. That said, we're just speculating on what the components are being added for. We'll have to wait for Nintendo to come out with official details to make things clear.

Huge thanks to Dakhil for the heads up!
Source: Link, Link
Rating: 0

This is for a revision to the current Switch development kits, (HAT is the serial number for dev kits, seems to have the same exact chip as last years switches), this is not for the Switch Pro.

I can’t wait for this new device to be unveiled by Nintendo themselves. I’m always excited for new Nintendo hardware.

This is for a revision to the current Switch development kits, (HAT is the serial number for dev kits, seems to have the same exact chip as last years switches), this is not for the Switch Pro.

why revise the dev kits if theres no change to the retail units? whats the point in changing the ram on the dev kit if the ram didnt change on the retail board at all... obviously this has to be the dev board for an upcoming model..

Unlocking the clock on the revised battery switches from last fall, it seems. Likely allowing the CPU to be clocked higher for faster loading, unless they are planning some ability to get another mode in alongside the pro release, which would be... weird. If this was the pro revision, they would also need to mention changes to the screen mention both by the newspaper and Bloomberg, which is absent to this filing. So this probably isn't the Pro.

If this is a new dev kit for the pro, this is using the mariko revision, so it would be a pretty tiny upgrade. So lets hope it doesn't end up being that.

Why would they call it Pro though? PlayStation already uses Pro and then there's the Pro Controller so wouldn't that confuse search engines.

They won't call it Pro? I'm not going to try to guess the name of the system, that would be pointless. Pro is just an easy word to type that gets the point across, I don't think anyone actually thinks it will be called Pro.

Knowing modern Nintendo, they'll call it something like Super Switch or Switch U. Nobody would buy it if it were that second one.

It'll be called the Switcheroo

Ooh, I like that one! That'll be guaranteed cash!

This looks like a simple hardware refresh like we’ve already gotten. Perhaps a chipset with a new RAM supplier too.

Is there any site that has pictures of original Switch innards for comparison?

its on the same source site, you just have to dig around on the filings pages

Again, expecting Nintendo to do a huge revamp at this point is being silly.

Why would Nintendo possibly want to make a rational business decision, that would be just silly.

Because it would just not work in the grand scheme of things. This is already Nintendo's most expensive system that they have produced outside of Wii U. Like 300$ for the Switch set and 200$ for Switch Lite.

Just doing something like a Switch pro only makes it worse if all it ever does is have exclusive games for it which can alienate consumers. I mean look at the N3DS lineup. Not that many exclusives and it didn't do much for Nintendo either.

New 3DS's exclusives did nothing for it, first because they only updated the CPU (and quite massively, but that didnt affect most games) due to the GPU supplier they chose, plus even with the spec upgrade it was so far removed from any other system that exclusives would just be slightly better looking handheld designed games, so outside of unity, what was the point?

How would that alienate customers. Again, Nintendo has no reason to make games exclusive to Switch Pro, they probably won't unless it relates to some gimmick which is so hypothetical I don't think its worth discussing. But in terms of power, how would having a big third party title (say... Resident Evil 3, or Final Fantasy VII Remake) which couldn't possibly run at a desirable state (to the devs), that is to say, would never have been on Switch, actually available on a Nintendo system alienate customers? Its pretty clear those games arent making it to the system in the first place, I don't think it would come as a shock to customers. Why would Nintendo say, "no we don't want your support and we also dont want to broaden the appeal of our platform just so we don't alienate a few customers". That would be such a minor thing to worry about, especially considering Nintendo has never had any problem having first party exclusives the last 3 times they had upgraded handhelds, and in this case Im saying they won't even do that. Didn't Switch Lite not support docked only games (because it physically couldn't run them), wouldn't that have alienated customers even more?

How would that alienate customers. Again, Nintendo has no reason to make games exclusive to Switch Pro, they probably won't unless it relates to some gimmick which is so hypothetical I don't think its worth discussing. But in terms of power, how would having a big third party title (say... Resident Evil 3, or Final Fantasy VII Remake) which couldn't possibly run at a desirable state (to the devs), that is to say, would never have been on Switch, actually available on a Nintendo system alienate customers?

Because its like I said, those who bought the Switch which is on the same brand would have to buy the better hardware because of so and so reasons. N3DS series could be the only way to play SNES games instead of the regular ones and that caused a lot of flak.

And it would not benefit third parties whatsoever because exclusives on an exclusive hardware could like be a insult to those who already bought the regular Switch.

Didn't Switch Lite not support docked only games (because it physically couldn't run them), wouldn't that have alienated customers even more?

But that's the thing. Nintendo clearly advertised it so that only it can be played on the go and there weren't that many games that needed to be played in dock only.

Nintendo can clearly advertise the technical jump of the platform then. I think consumers can figure out that the Switch is too weak to run a lot of multiplatform games.The consumers even interested in those games in the first place are savy enough to see Doom or Witcher III running on Switch and realize that this is the limit of what the system can offer. Its not like every third party game suddenly becomes exclusive so they can sell "Pros", if you can run your game on the Switch models with 60 million install base, your going to do it. Daemon X Machina 2 isn't suddenly going to be a Switch Pro exclusive. I don't think the line of why a game is or isn't exclusive to the more powerful hardware is going to be any more murky than Switch lite. In fact, there are plenty of games "incompatable" with Switch Lite that at first glance seem like they could be compatible (super mario party, for instance)

As for your first point, imagine saying, "well we could try to get A version of Resident Evil 3 on Switch Pro, but people who own a Switch are going to be insulted that a game clearly designed for more powerful systems isn't available on a weaker system so we won't release it because who needs money?". Say that it barely costs anything compared to porting to Switch to port to Switch Pro (that is, if Switch is as developer friendly as its made out to be, then the barrier to development has been its specs, not the APIs and the system itself). Then, if it costs almost nothing to port the game, why would a third party say no to free install base, especially install base likely to be over 20 million if new 3DS is anything to go by. Third parties arent going to care if a select number of people arent insulted by them not releasing on base Switch, if they could release it on Switch, thats even more install base, they absolutely would, but they aren't.

Also, why should Nintendo even humor people who feel "insulted" by this? That would be like saying every 3DS game should also be on DS, because clearly the 3D isnt the reason those games are on 3DS, and DS consumers are going to be insulted they have to upgrade. Now of course, that's not exactly one to one to this situation, 3DS was a new system, Switch "Pro" is an upgrade. But with that said, 3DS was an entire library of new games solely made for 3DS, Switch Pro is going to be a much smaller library of select multi platform titles. That seems like much less of an issue than the prior example, so I don't see why Nintendo would suddenly care about it. If Nintendo was targeting Switch Pro for a new Fire Emblem game, yeah, I'd be a Switch "Pro" owner and I'd be a bit peeved. But I don't see them doing that for any good reason, so I don't think thats a problem. If Switch consumers feel like they have to upgrade to get games that were never going to be on the Switch in the first place, thats their issue. If Nintendo doesn't make a Switch Pro, Switch users would still need to buy another platform to play those games, and that platform would have no compatibility with their current Switch ecosystem or even more importantly, any portability. So nothing would change, for the worse, with a Switch "Pro". The consumers that can't figure that out are going to struggle just as much 3.5 years from now when Nintendo launches a new system.