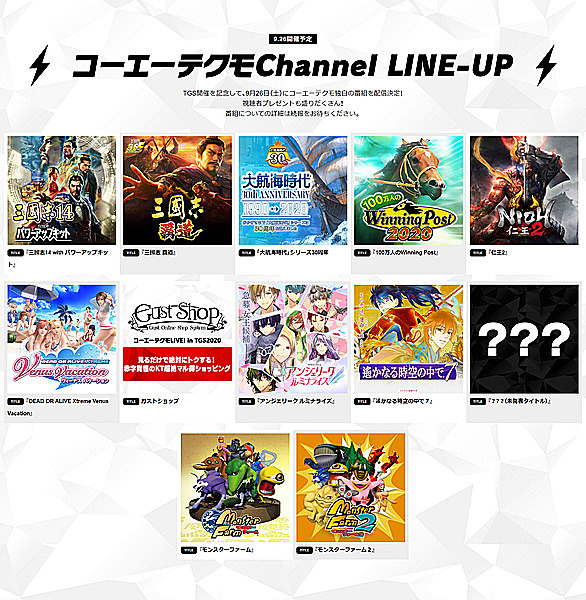 Koei Tecmo has already shared a rundown of what to expect from their TGS 2020 Online lineup, but now they've provided a complete rundown with details. Check out the updated schedule below.

More than 10 Koei Tecmo titles will be introduced through Koei Tecmo’s original programming as part of Tokyo Game Show 2020 online, including:

12:35 to 13:05 – Recruiting Queen Candidates! Angelique Luminarise TGS Special Broadcast – The first new entry in the Angeqlique series in 18 years. An introduction to the charm of the new Guardians, information on the soon to be released drama CD, and more. Presenters to be announced.

20:40 to 21:00 – Atelier Ryza 2 Video Premiere! TGS 2020 Gust New Merchandise Introduction Special Broadcast: Even Online, the Gust Shop Office Will Never Die! – An introduction to the latest merchandise with Ai Kakuma and Akira Tsuchia, as well as valuable information you will only get during this broadcast. There is even a video premiere for Atelier Ryza 2. Featuring Ai Kakuma (Surge Concerto series’ Ion voice actor) and Akira Tsuchiya (producer).

Romance of the Three Kingdoms XIV: Diplomacy and Strategy Expansion Pack Bundle (PS4, Switch, PC
Uncharted Waters Series 30th Anniversary – An introduction to each Uncharted Waters game from its respective producer, as well as a look back on 30 years of the franchise.

Western releases for these and Nobunaga's Ambition please!

RotKXIV for Switch was already announced for western release by their Facebook page, as far as I'm aware. I could be wrong though.

That statement fills me with joy :D

I agree~ I bought it on PS4, but just dont really find time to sit at my TV to play it, so I am excited. The expansion looks like it significantly improves a lot of the problems I had with the game initially, too.

I thought Age of Calamity would be part of this?

It's in there, though I have no idea why it's not being used as a headliner.

You're right, I'm surprised they didn't even put it on the picture lol.