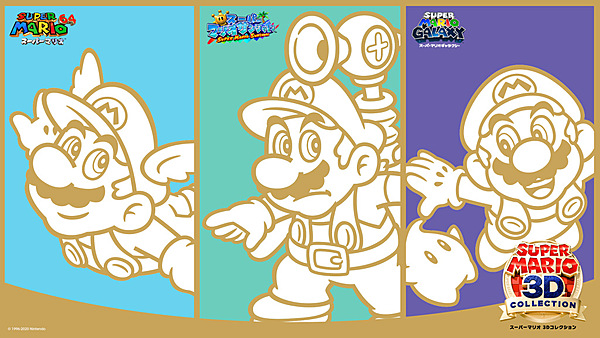 My Nintendo Japan has just added a new wallpaper for its members to download, and it features Super Mario 3D All-Stars. You can see the art above, and it comes in all different sizes for mobile/PC. It costs the grand total of 0 Platinum Points as well, so hopefully this option releases here soon!

Sunshine has the best Japanese logo by far

NOA...you better give us this. How can you not give us this amazing wallpaper that is illustrated by the great Yoichi Kotabe? JUST HOW?!?

I would be surprised if Kotabe himself drew these. It's certainly his style, but that style has been house Mario style for decades. It's so codified that Shigehisa Nakaue's work is often mistaken for/assumed to be Kotabe's.

In any event, I hope we get the wallpaper--and I personally would prefer that NOA's My Nintendo continue their own wallpaper line , with 2D Mario artwork large, crisp, and in full color.

Wow, you know a lot! Who's Shigehisa Nakaue? Is he a staff from Nintendo? I don't recall seeing his name on the credits.

Thank you! I've been a Mario (and Mario artwork) devotee for a long time.

Nakaue is a Nintendo staffer focused on artwork and artwork supervision. Just about all his credits are for Mario games, including big titles like 3D Land, 3D World, Mario Kart 8, etc. You could say 3D Land was his "debut" as lead Mario artist emulating the Kotabe style perfectly, but he's credited with art supervision and artwork for earlier games that are a little more stylized (like Mario vs Donkey Kong 2 and Super Mario Strikers).

Kotabe has actually been retired for more than a decade, and probably spent his last few years at Nintendo mentoring Nakaue during his first few years there!

Wow! Thanks for the info!

I hope that the newer illustrator lives on and mentors another one before retiring.