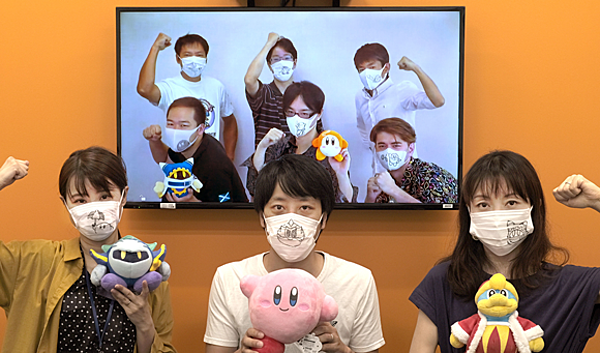 HAL has obviously been working on Kirby Fighters 2 in secret for quite some time now. The cat's out of the back though, as the game just launched last night! To commemorate the game's launch, HAL has shared a special dev blog. You can read the entire blog below, thanks to a translation from Nintendo Life.

Kirby Fighters 2 was suddenly released today on the Nintendo Switch! This is the first new Kirby Fighters game released in six years! This work was developed under the same engine as Super Kirby Clash that launched last year, with Yumi Todo, my two directors, and General Director Shinya Kumazaki. In order to make the title Kirby Fighters 2 as a suitable sequel, we worked together as a team to power up the game elements! Now, let’s talk about some of the new content!

First, the playable fighters. There are 22 fighters, which is a significant increase from the 12 available in Kirby Fighters (two of which are bonuses for purchasing Kirby Triple Deluxe on the Nintendo 3DS)! Many fighting game fans find the addition of new fighters the most appealing feature of a new game. By the way, I also play fighting games (although I’m not great). Furthermore, the fighters that can be used are not limited to Kirby’s copy abilities! Other popular characters in the Kirby series are also included!

The above characters are also available!

Furthermore, Wrestler has also been added as a new ability for the game! As the name suggests, it features flashy throwing attacks and other traditional wrestling moves that wrestlers are known for. Actually, this is the first time in 15 years since new abilities were created for a spin-off game, the last being unveiled in the Nintendo DS game Kirby’s Canvas Curse! As a result, we created a new ability with many features! The exhilaration of pulling off a powerful throwing technique is spectacular, so we hope you enjoy it!

Next, I would like to talk about Destined Rivals. This single-player mode evolved from the idea that "this is a multiplayer game, but I want to develop a mode that is fun, even when playing alone.” As for the story, King DeDeDe and Meta Knight, who have often fought with Kirby, form a team to finally defeat him, and so they send him a challenge! Kirby couldn't read the challenge letter, however. Kirby also teamed up with his friends to challenge the Buddy Fighters Tower, where King DeDeDe and Meta Knight await!

What do you think? It’s a heated story worthy of a shonen comic! In addition to this exciting story, we also have a game system that is thoroughly refined. In this mode, you can only collect one of three available items each time you climb the tower. These items include:

Players battle to the top floor of the tower by using the best items and adapt their play style in ever-changing situations. The items you can acquire will change each time, so there’s a real sense of replayability!

By the way, I said "I want to develop a mode that is fun, even when playing alone," but you can also play with two people, so be sure to play with your friends to capture the Buddy Fighters Tower! There are many other new elements that I want to discuss, but please allow me to also talk about the development of this game.

This project was developed alongside Nintendo and Vanpool following Super Kirby Clash during the COVID-19 pandemic. Due to teleworking, it was developed in an environment where we could neither meet nor talk in person, but since the game was developed by the same team for two games in a row, there were no communication problems and we were able to develop the game without major issues.

This game includes online play as well as local play. You can also battle with people all over the world and with distant friends. You can have a heated battle near or far, so please enjoy competing to be the best in the world!

See you next time!

The next post will feature Hiroshi Ohnishi, the Program Director of Kirby Fighters 2. Please stay tuned!