Genshin Impact developers comment on the Zelda: Breath of the Wild comparisons

A difference experience beneath the surface
25 September, 2020 by rawmeatcowboy | Comments: 17 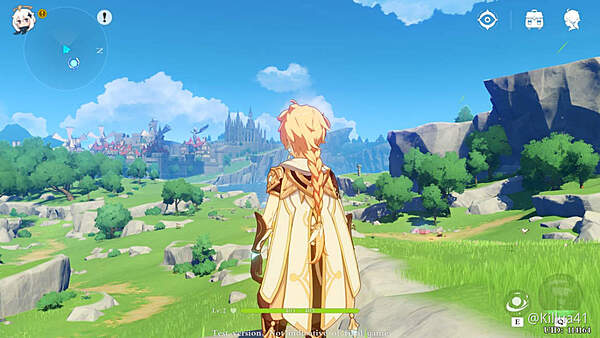 Genshin Impact looks like a gorgeous and fun game in its own right, but ever since the game was revealed, people were quick to compare it to Zelda: Breath of the Wild. Some felt the game was leaning more towards rip-off than tribute or homage, and it's a sentiment that's stuck with the game ever since.

In an interview with FreeMMOStation, developer miHoYo addresses the comparisons between the two games, and feels those comments will fade away as people play Genshin Impact.

...is that braid a rattail?

I'm actually looking forward to playing it on PS4.

I never got the deal with this game. The only thing you could argue it resembles from BOTW is the aesthetic.
The game plays completely different.

Anyone who says it’s a rip off must have only looked at the visuals and jumped to that conclusion. It’s clearly a different kind of game. Even if it was “Breath of the Waifu”, great! Breath of the Wild is an excellent game and I want to see more like it. I don’t mind Metroid “rip offs” either. Be inspired by the best.

Same, I more than welcome games inspired by BotW to be made since it was really fun. Shame about the gacha in this one though...

Not necessarily. I call it a rip off because it's gacha and not because of how it looks.

Maybe. I honestly can’t say I know much about that mechanic. If it’s a micro transaction gacha system, then I’ll absolutely pass on it. Some gacha are only in-game currency though, like Xenoblade 2’s. I can see that being frustrating, but not a rip off.

It uses real currency. It's like how that Star Wars Battlefront game was kinda, with how you have to grind for insane hours to avoid paying.

Well that sucks then. I have a lot less interest in it now.

It doesn't seem to be a typical predatory system. I recommend this video to getter better info on the game:

Thanks for that, man. I’ll check it out.

I hope the video helps

If you choose to copy something after it gets big, then you also have to take responsibility for doing so. It's also natural for people to be suspicious of you if you do so.

For instance, if a BotW-like look was something that any developer could have implemented at any time, and also artistically believed in it, it stands to reason we should have already seen various examples.

But there weren't that many games with a graphical look similar to BotW before it became popular. And soon after Nintendo popularaized the look, things like genshin impact and gods and monsters were revealed shortly after.

So logically, since it wasn't being done before something got popular and is after it became popular, it's safe to assume that the reason behind the choice isn't that the developers artistically believed in it all along, but are simply trying to take advantage of what's popular. (Unlike Nintendo, who chose to go with a distinct style that wasn't popular at the time because they believed in it.)

And obviously that's not a great look to have, so it's natural for people to call you out for it.

This isn't true with just BotW but anything that gets popular. (Fortnite's style, minecraft's style, apple design language, etc.)
The first popular instance may not be the origin of the idea, but the bandwagon of copycats after are almost certainly trying to take advantage of the situation rather than organically shaping their look and happening to end up with a dead ringer.

However, unlike Ubisoft who tried to pretend they weren't drawing heavy inspiration from BotW, at least this dev is being honest and owning the decision.

Meh. I don’t really care to keep score on who came up with what. Someone might accuse Nintendo of copying Assassins Creed’s tower system but I honestly don’t care if they acknowledge it or not.

Well, everyone's free to judge based on their own opinion.

If Link climbed a tower to get the map filled in with icons for where everything was, I would definitely accuse Nintendo of copying assassin's creed tower system.

But since it doesn't work that way, and the towers main purposes are actually fast travel points and glider launching points, in my opinion Nintendo vastly improved the tired ubisoft formula, instead of simply copying it, and that would be the difference. The only common factor is a tower must be climbed, a much more vague and general concept compared to apeing an entire graphical art style, down to the color pallette.

Also, if you look at the timing, it's not at all the same thing. Did ubisoft first put in assassin's creed towers, get incredibly popular, and then a few months later Nintendo showed up with a new game called BotW that also had towers? Not at all, in fact, even ubisoft has been acting away from towers when Nintendo decided to first implement them, which if anything suggests they did it *despite* waning popularity, but again went with it because they believed in their work. So basically, the exact opposite of this.

I'm not keeping score of everything either, but I can't fault people for calling someone out on what is, as I explained earlier, a completely rational response.

I guess people just don't know what's being ripped off and what isn't. And the game is more of the latter.

It's a Gatcha game. That's all I have to know to completely ignore it.