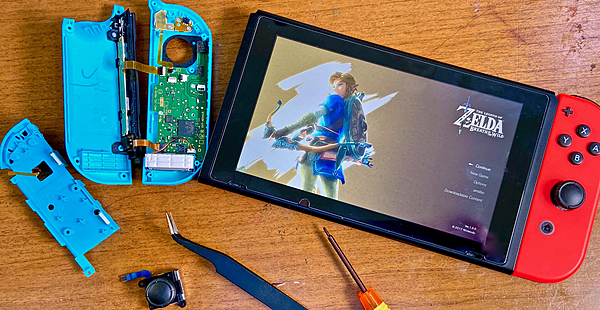 I think most Switch owners would agree that Joy-Con drift is an issue. Countless people have complained about the problem, contacted Nintendo about it, and gotten replacements. Even with all that evidence out there, Nintendo is reportedly arguing that Joy-Con drift isn't really a thing in a court battle.

The Chimicles Schwartz Kriner & Donaldson-Smith law firm is currently involved the class-action lawsuit with Nintendo about Joy-Con drift, and they're looking for more input from Switch owners who've dealt with the issue. Their firm has sent out an email to a number of people who've gotten in touch about Joy-Con drift, as they're looking for more video evidence of the problem. You can read the law firm's email below.

“Thank you for contacting our law firm about the Nintendo Switch Joy-Con Drift litigation. We are working on putting together a montage of video clips from Nintendo Switch owners such as yourself as a way to give voice to the joy-con drift issues you’ve experienced. This will be helpful to us in responding to Nintendo’s arguments about how this isn’t a real problem or hasn’t caused anyone any inconvenience.

In an effort to humanize and demonstrate these issues and their impact on consumers, it would be helpful to our prosecution of the case if you would submit a short (90 seconds or less) video to us describing your experience with the Joy-Con drift on your controllers.”

As you can see, Chimicles Schwartz Kriner & Donaldson-Smith claims that Nintendo is saying Joy-Con drift "isn’t a real problem or hasn’t caused anyone any inconvenience." Now that's most certainly paraphrasing Nintendo's comments, but you'd have to imagine their defense in court is somewhere along those lines. With this statement being sent out, I would imagine Nintendo will have something to share publicly in the near future as well.

If the only problem my joy-con had was drift it would already be bad, but they've got much more than that

best case scenario, they get forced to replace every single joycon on the market, wouldnt cost them much concidering their "warchest of money" or what its called.

That said, they absolutely must have several joy-cons in their possession that exhibit the issue(s) and should be able to root cause the issues and determine if it’s software or hardware or both that needs fixing.

The other reality is that they have done the maths and know the failure rate and calculate that it’s cheaper to continue the status quo.

I recall reading somewere that they bought cheap sticks from china(?), and that that was the main issue, but yea they definitly benefit a lot more on status quo unless they get a really huge fine, concidering I bet a lot of customers (including me) got to lazy to send it back and just order new ones, hence benefitting them tremendously.

Well... I suppose it is more of an annoyance than an actual inconvenience... then again, so are my many mosquito bites... and I'd be way happier right now without them...

Oh Nintendo, or more like Nintendo’s lawyers, should know better than to make a statement like that.

My individual case is that I have 4 joy-cons, two from a launch day Switch, and have had zero issues whatsoever with any joy-con.

However, it’s undeniable that people have had consistent problems. The total percentage of joy-cons affected is unknown.

I've never experienced this with my Day 1 system, but then again I can't even remember the last time I had to use my JoyCons since I use my Pro Controller the whole time. I know, you all were very interested in how this doesn't impact me.

I have a feeling that Satoru Iwata would have been much less shitty about this.

I know how that would go. “Please understand.”

Then he'd give up another year of his salary to replace everybody's analog sticks with one's that aren't garbage in shame.

I'm sure Nintendo's lawyers did not say that. They would say "a small number of people" have experienced issues.

I hate my joy-cons. Drift is the least shitty part. It’s much worse that they loose connection ALL the time. So they are totally unusable for multiplayer. I can use them attached at least. But yeah they drift also...

I have 5 sets of Joy-Cons, they all drift given the right conditions (playing inside my house is one of those conditions).

It's super frustrating, we play 8-player games all the time, and it's so prevalent it makes for unhappy players.

I've still got my GameCube WaveBirds, which work great w/Switch, and a host of Nintendo hardware for decades that is flawless magic!
...but the joy-cons are a problem and it's very disappointing that they can't be fixed!

Felt like when someone breaks your finger so you'll stop annoying them with your guitar and then you fix the break by playing the guitar even harder.

Have my Joy cons for more than a year...and still no drift. I can see Nintendo's point.