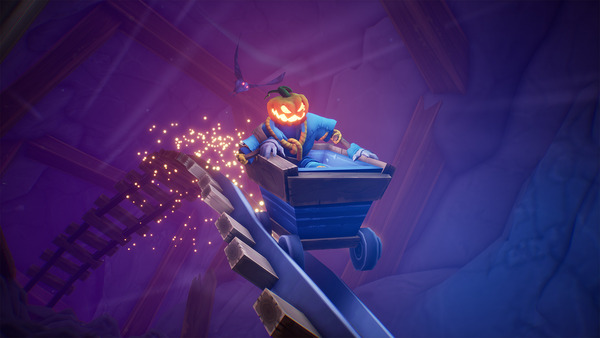 Pumpkin Jack looks like one of those classic mid-range games that used to be all over the gaming scene back in the early 2000s. Games that provided great experiences, but didn't have insane budgets like AAA titles. It's nice to see that kind of game pop up nowadays, but how in the world did it come to be?

Developer Nicolas Meyssonier shared a blog about his work on the project, and reveals that the entire thing was actually cancelled at one point. Thankfully things didn't stay that way, and Meyssonier stuck with the idea to see it through to the end. Read the entire story of Pumpkin Jack's creation below.

"Once upon a time in a far away kingdom... I was looking for a game on Steam. Something that would be colorful as well as a single player experience offering a great adventure. Even after weeks of searching I was not able to find what I was looking for. I am pretty sure that happened because I was unconsciously looking for something being exact like my favorite game of my childhood, Jak & Daxter, which was unfortunately never ported to the PC.

That was when an idea came to my mind: If the one I am searching for is not available, why not create my own game? I had no idea how easy or hard this would be, I just wanted to do this. So everything started with a simple search on Google: "How to make games". Yeah, it sounds like a cheap cliché, but it was the beginning of a (felt) endlessly long learning process.

At first, I wanted to make a scarecrow that could control crows. True, it's a stereotype. But hey, that’s the way everything began. I learned to create 3D models, made my first scarecrow, taught myself how to animate it and learned how to integrate it into the Unreal Engine. Thanks to modern software we have nowadays, those steps only took me one week! Following that, I created more animations to let the scarecrow attack, and made some monsters to have something for it to attack.

"Two years later I released a first demo on Itch.io. It had gone wild and was much, much more successful than I expected! At this point I started to realize that my little project might have the potential to become something way bigger than what I aimed for initially. I received emails from YouTubers, streamers and even publishers who wanted to help me with the game. This was insane, I just couldn't realize what was happening. But believe me, I was incredibly happy!

Finally I decided to quit my job (I worked for a French game development studio) and started to work full time on Curse of The Scarecrow. People seemed to like my game, and so did I and wanted to spend more time on it. I was looking for a publisher and so I wanted to deliver the best game I could, and I decided to cancel the game once again and (you guessed it) re-built it once more. Why again? Because I want to deliver the best possible experience to you players out there! And so, Curse of The Scarecrow died, and Pumpkin Jack emerged.

From that point onwards I had the chance to work with the guys from the German-based publisher Headup, who helped me out and made this game possible. Today it is a huge pleasure and a very huge honor to see my own game, my childhood dream game, on its way to be available very soon on PC and consoles!

I have learned so much on this long journey - professionally, but also personally. Finally, what is the moral of this story with a happy ending? You yourself are responsible for making your dreams come true! Yeah, and that's definitely a good ending, too."

Pumpkin Jack shouldn't be missed on any "Games to play on Halloween" list. Featuring a spine-crawling array of gameplay mechanics, players will have an entertaining playtime of 5-8 hours, hunt for all collectibles and and try out the dedicated speedrun mode afterwards.