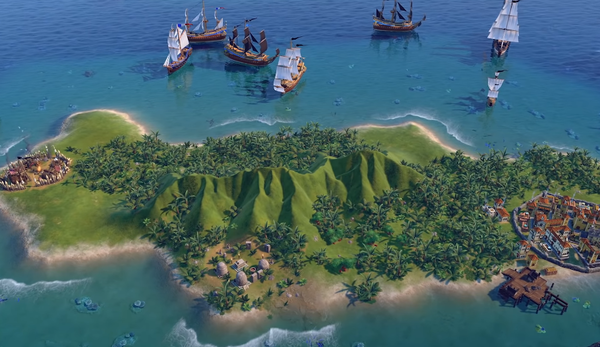 Civilization VI has just gotten its October 2020 update, which was detailed in a video feature not that long ago. For a more detailed rundown of what the patch includes, check out the official patch notes below.

“Pirates” is a fast, competitive scenario for 1-4 players. Each player takes the role of a Pirate King as they progress on their pirating career. Over 60 turns, players pillage ships and cities, build up their fleets, collect powerful Relics, and strive to become the most infamous pirate in the tropics. The scenario reimagines many aspects of Civilization VI so players can focus on new naval and scenario-specific gameplay. The four Pirate Kings aren’t only battling each other, however. There are also four AI civilizations (Spain, Netherlands, England, and France) fighting to control the map, as well as Buccaneers, this scenario’s version of Barbarians. Some of these barbarous fleets are even lead by history’s most recognizable Infamous Pirates.

Win/Lose: The Pirate King with the highest score at the end of 60 turns wins! Pirate Kings who lose all their units will be eliminated from the match.

The Caribbean Islands: A handcrafted map of the historical Caribbean. Cities and ports are placed based on their real-world locations and should be familiar to anyone who has played Sid Meier's Pirates!
Pirate Islands: The Pirate Isles is a map script custom-built for the unfriendly seas of the Pirates scenario, full of mysterious islands, rich and vulnerable ports, and danger.
Pirate Leaders

Walk the Plank (Active Ability): Can be used by every ship in the Dread Pirate’s fleet. Immediately sinks any badly-damaged enemy ship in exchange for +3 Movement and +5 Combat Strength for 5 turns.
Fightin’ is What We Do Best (Passive Ability): +10 Gold every time a unit engages in combat.

Bring Her Home (Active Ability): Can be used by every ship in the Privateer’s fleet. Captures a badly-damaged enemy ship for the Privateer's patron. Using Bring Her Home grants +5 Infamous Pirate Points and +100 Gold in addition to the usual naval victory rewards. Takes 5 turns to recharge.
Letter of Marque (Passive Ability): Grants the Privateer a randomly-assigned AI civilization as a patron. The Privateer knows the location of all their patron's ports. Pillaging trade routes grants an additional 100 Gold.

Chain Shot (Active Ability): As a free action, all ships in the Hoarder’s fleet can use the Chain Shot ability to anchor an enemy unit in place for two turns. Chain Shot takes 5 turns to recharge.
Mine! Mine! Mine! (Passive Ability): Unit Maintenance cost is reduced by 3. +10 Treasure Points for burying treasure. The Hoarder gets 3% interest on their gold reserves per turn.

Relics are powerful unit upgrades that occasionally drop when performing actions such as visiting taverns, sinking ships, and finding treasure. Each Pirate King has three slots for active Relics and can swap Relics in and out to customize their playstyle.

Reduce Llanero adjacent strength to +2 (was +4).
Drop Comandante Generals to no bonus movement (was +1 Movement).
Drop Hacienda to .5 Housing.
Hacienda can be affected by Drought natural disasters.
Cost scaling for purchasing the Nihang unit (Tech progression scales to 4x its base cost).
Fixed an issue preventing forest fires and meteor showers from showing up as intended in non-Apocalypse games.
[Gathering Storm] During Apocalypse mode, EYJAFJALLAJOKULL (Vikings Scenario Pack) erupts and can be triggered by soothsayers.
[Gathering Storm] Comet strikes that eliminate districts now permit the player to build the district (in a suitable location) again.

[Rise and Fall] In Dramatic Ages, repeated Dark Ages will no longer result in a negative Golden Age threshold score. It is now a minimum of 0.
Updated the Era Score meter in Dramatic Ages to properly display information.

Spy missions can no longer be performed in cities of a player you have an Alliance with.
Recruit Partisans mission now pillages the Neighborhood district (so that it cannot be spammed), and spawns only anti-cavalry units (weaker units than previously).

[Gathering Storm] Rock Bands can no longer play on pillaged buildings and districts.
Fixed an issue where the Netherlands bonus of +50% towards Flood Barriers was not working.
When forming a Corps or Army within range of a Great General, only apply abilities marked as permanent to the Corps/Army.
Various crash fixes.

Reduce interest in AI trading for diplomatic favor in the ancient and classical era.
Decrease AI desire for Diplomatic favor.
Increased desire for Oracle and Pyramid.
Ensure AI repairs city defenses promptly.
Increase value of wall repair project based on value of the city.
Reduced the number of Spaceports an AI builds.
Reduced the value of Faith if they have an already high income.
Improvements to protect Settler units.
Additional AI updates.

[Ethiopia Pack] Re-order Governor panel to show Secret Society governors first.
Policy cards now feature their full description in the tooltip.
Fixed an issue where Civilopedia page history hotlinks were not working properly.
The progress meter is no longer shown on Techs or Civics once that it has reached the Researched state.
Civilopedia will no longer leak info on unrevealed techs or civics in Techs and Civics Shuffle Mode.
Unit panel now updates on turn end to show correct states for unit actions.
Beliefs are now sorted by type in the Religion screen.
[Gathering Storm] Added government lens color and used the standard palette for Gathering Storm government colors so they work with colorblindness adaptations.
Added support for painting and selecting tiles in World Builder on touch screens.
Various text updates.