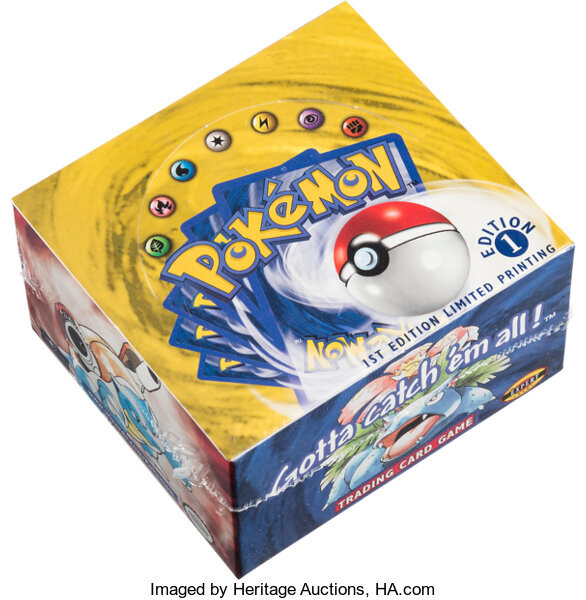 Pokemon cards have always been highly sought-after collectibles that bring in major bank, but things have really ballooned in the last year. That goes for both value and popularity. People are willing to pay some incredible amounts to get original cards, and that's led to a new world record being hit.

Heritage Auctions just closed out an auction for a first edition Pokemon TCG base set booster box, which brought in an unbelievable $360k. You can see the full breakdown of the auction in their official press release below.

A sealed first edition Pokémon base set booster box set a world record when it sold for $360,000 in Heritage Auctions' Comics & Comic Art Auction Nov. 19-21. Thomas Fish, president of Blowoutcards.com, was the winning bidder of the Pokémon First Edition Base Set Sealed Booster Box (Wizards of the Coast, 1999).

“I am thrilled to purchase this pedigree box as well as the Pokémon Demo Game Sealed Booster Pack (Wizards of the Coast, 1998), PSA GEM MT 10, from the Pokémon Central Collection,” Fish said. The single deck of cards booster pack ended at $22,800.

Still sealed in its original shrinkwrap, the Pokémon First Edition Base Set is considered the pinnacle of Pokémon box collecting. The sale broke the previous world record, which was set at Heritage Auctions in September 2020 when a similar set sold for $198,000.

"This set is the pinnacle for all Pokémon collectors, and the back-to-back record-breaking sales show that," Heritage Auctions Assistant Comics & Comic Art Operations Supervisor Jesus Garcia said. "This set comes from a very low print run, and to find one that is still sealed and in such great condition explains why the demand for it was so intense.”

Bidders were exceptionally aggressive in their pursuit of the lot. Online bids exceeded the previous world record before the auction even opened.

The Pokémon booster box wasn’t the only item smashing records at Heritage Auctions Thursday. The first day of Heritage’s four-day Comics & Comic art event also saw the highest price ever realized for a Batman comic book when a Fine/Very Fine 7.0 copy of Detective Comics No. 27 sold for $1.5 million. The first two sessions in the Comics & Comic Art auction realized a combined $7.83 million – with three days left in what’s shaping up to be a historic event.

Let's hope there's no follow-up story confirming it's fake. Wouldn't be the first time it's happened. It's crazy money to spend on paper.

Makes you wonder what sealed items a person should buy right now and save for 20 years.