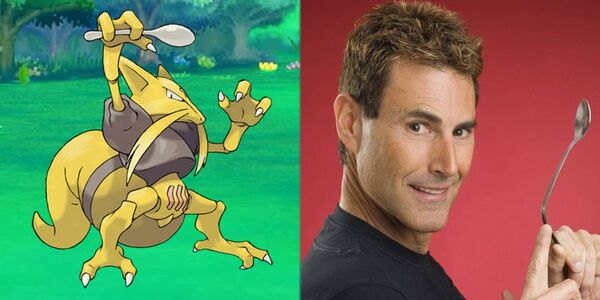 Magician Uri Geller is most well-known for his spoon-bending trick, which obviously inspired Pokemon Co. and Nintendo in their design for Kadabra. When Geller caught wind of Kadabra and his spoons, as well as Kadabra's Japanese names (Yungerer, Yungeller, and Yun Geller), he sued Nintendo and demanded the cards were yanked from Pokemon TCG sets. Now 20 years later, Geller has had a change of heart.

Geller took to Twitter to apologize for the whole situation, while also revealing that Nintendo now has permission to print the cards once again.

“I am truly sorry for what I did 20 years ago. “Kids and grownups I am releasing the ban. It’s now all up to #Nintendo to bring my #kadabra #pokemon card back. It will probably be one of the rarest cards now! Much energy and love to all!”

Why bother making this move 20 years after the original dispute? According to an interview with The Gamer, Geller says the constant requests from fans for him to reverse his decision swayed him to change his mind.

“Due to the tremendous volume of emails I am still getting begging me to allow Nintendo to bring back Kadabra/Yungeller, I sent [...] a letter to the chairman of Nintendo giving them permission to relaunch the Uri Geller Kadabra/Yungeller worldwide.”

Thanks to Cassidy for the heads up!
Submitted by: cassidy
Source: Link, Link
Rating: 1

That’s the longest magic trick ever. He made the cards disappear and twenty years later poof they’re back.

Guy is a total phony, and this has been proven multiple times. And his claim is also total bull-crap. He has no case whatsoever. He's just doing this now for some free publicity.

Do you mean his trick of spoon bending isn't actually psychokinesis?! 😱

Kadabra's Japanese name is clearly a corruption of his name; every Pokémon fan site agrees on this. So what do you mean his claim is total bull-crap? Don't read this the wrong way, but you seem to be taking it rather personally that the largest grossing media franchise in the history of the world avoided selling one particular trading card to evade legal disputes. 😕

I guarantee you he has LITERALLY no LEGAL claim [as in owns the rights to the trademark, copyright, other) over the name or word kadabra or its Japanese name whatsoever--ZERO.

Have I made that clear enough for you?

"In 2000, Geller attempted to sue Nintendo for a whopping £60 million ($100 million). His claim was that the Kadabra character was in fact an unauthorized parody of himself. Geller also stated that the shapes on Kadabra's chest looked a lot like Nazi SS markings, something which he found even more offensive.

Nintendo turned me into an evil, occult Pokémon character. Nintendo stole my identity by using my name and my signature image. I want to tell the world before the start of the holiday season that I have nothing whatsoever to do with these violent characters.

Thankfully, the lawsuit was thrown out of court."

To play devil’s advocate, then why did they stop releasing Kadabra cards if he has no legal claim? Out of the goodness of their heart? I do agree that his proclamation seems pretty self serving.

Because this is Nintendo, and Nintendo just does strange stuff. The case was literally thrown out of court. It could be they just don't want to waste the money paying lawyers to defend their rights to use the character and name every time Geller makes a false claim. He can probably do that relatively easily, and potentially for even near to no money (especially if he represents himself), whereas Nintendo's lawyers likely get paid hundreds to thousands of pounds per hour, even if they are just defending false legal claims. Again, I don't really know why no cards have appeared with character on them for a while--he's certainly been in all the games, which shows there is no issue over copyright and Trademark on the design or name--but this is Nintendo we are talking about.

That’s a pretty weak rebuttal. So, Nintendo will fight joycon drift in court, but won’t fight to be able to use Kadabra on their own cards? (Folding TPC into Nintendo for the sake of this conversation). Going by your analysis, it should be an easy case and be thrown out each time. I’m more willing to believe that Nintendo/TPC decided to take his criticism given that he was part of the inspiration for the character. Especially when you consider how Japanese values/morality differ. I think the real interesting thing will be if Kadabra starts appearing on cards again— it wouldn’t be a coincidence.

Copyright lawsuits can be tricky and to me Nintendo and TPC decided to play safe and avoid risks. He clearly doesn't have a case in the US (he made some baseless accusations, like claiming that they turned his likeness into a monster sporting Nazi and occult symbolism), but we don't know how things would turn out under Japanese law.

Anyway, Ubisoft did something similar with their Gods & Monsters project after Monster Energy sued them for using the word "Monster". It's a preposterous and absurd claim, and any sound-minded judge would decide in favor of Ubi, but they decided to play safe and use the horrendous "Immortals Feny Rising" name.

"I guarantee you he has LITERALLY no LEGAL claim [as in owns the rights to the trademark, copyright, other) over the name or word kadabra or its Japanese name whatsoever--ZERO."

It's obviously not about the name "Kadabra," but the fact that it's a Pokémon named Yun Geller who bends spoons psychically.

I'm not defending Uri Geller here, but your loathing seems irrational. Everything okay?

He has no claim. He never has had a claim. His case was thrown out of court! He's bringing it up now and spinning another false narrative to once again use it for free and easy publicity, because he knows fine well the so called "professional" journalists reporting this artificially constructed "news" won't bother to take two minutes to check the facts of the thing they are reporting. And now he's getting a lot of false praise and props from a bunch of similarly ignorant gamers too.

This is the man you are indeed defending one way or another (by even suggesting there is some legal basis for his case based on the character's name that sounds a little similar to his name, but isn't, and that literally looks nothing like him and has no element that is copyrighted or Trademarked by Geller. Geller does not own the legal rights to a word that sounds similar to his name, or a representation of a character bending spoons.The law does not work the way you think it does):

I don't think you are a lawyer... In fact, I'm sure you're not, but Capcom literally changed the names of three characters in SF2 because they were worried that Mike Tyson would try to file a lawsuit. That isn't to say the lawsuit would have had merit, but a company would rather not risk the possibility of their legal coffers having to be tapped into.

Also, telling you what's wrong with your argument is *not* the same as defending the person you're arguing against. You really have to stop taking this thing personally and chill. The man made a stink for his own gain, as many has-beens do, but look at how people have been reacting to everything you've posted in this thread. Nobody has given you any positive acknowledgement, you've won nobody over (not surprising since you even resorted to name-calling until your post was moderated), you've edited the same post *six* times (????... That's some Girl, Interrupted stuff there), and all you've accomplished was showing people that despite all you've said about Uri Geller, he would still be a more enjoyable guy to have a beer with.

Please, Ahab, put down the spear and walk away from this thread. For your own sanity. The world has so many bigger issues to get upset about than this.

And that's the point: Even when lawsuits have no merit these companies will often make changes to avoid any potential issues going forward--because lawyers and stuff cost a lot of money. So, even though Geller has literally no legal case whatsoever--FACT--Nintendo might have still done what it did just to try and avoid any more hassle.

And, no, I'm not a lawyer, but I did spend two years defending my Trademark from a legal case brought against me by the multi-billion dollar corporate giant that is Warner Bros., which I defended myself--and I won.

And I do not care what you think about me, how people have responded, or whatever other crap. This guy is an insidious leech who's abused ignorant and naive and hopeful people for decades, to the sums of literally tens of millions, and now we find out he has also abused the hobby we love too--I presume you love games, otherwise get the **** outta my face and stop wasting my time--and so now is literally the perfect place and time to call the worm out.

I'm simply doing my due duty as someone who was duped by this twit as a child, as millions others were too (and still are being), and also loves games too (which means he's now made it doubly as offensive by attacking the thing I love also), as we all should, and a popularity vote in here changes that literally 0%.

The guy is vile, and I'm letting it be known, particularly in cases were "professional" gaming journalists write pieces on him worded in such a way that they actually praise him for what he did in the last few days--like he's somehow a decent human being and not the disgusting and abusive slime that he is.

Welcome back Kadabra!! This is great

That’s the longest magic trick ever. He made the cards disappear and twenty years later poof they’re back.

Woah this is news to me. I didn't think that Nintendo had legal issues with this...

It's been so long since I've seen Kadabra that I forgot he has the weirdest junk. (~_~)