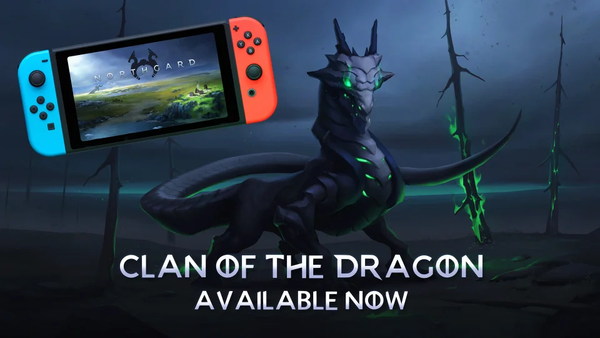 The anticipated "Clan of the Dragon" DLC from Shiro Games has been released for Northgard on Nintendo Switch for $4.99. Alongside it, comes the free version 1.1.0 update. Check out details on the DLC and the update's full patch notes below.

The most alien of all clans, the Dragons follow ancient customs and embrace freakish traditions. They use sacrifice and oppression to further their goals, often earning the distrust of the other Clans.

Starting Bonus
– Your civilians can go into neutral territory.
– No Happiness or Production penalty for being wounded.
– You start with a Sacrificial Pyre. You can build a Dragonkin Altar instead of other military buildings.
– You start with 2 Thralls. You can buy thralls from your Longship Dock

Oppression
Oppression is an important aspect of the clan’s economy. Their thralls, like regular civilians, can travel in neutral territory, carry out basic tasks and fight..
Thralls can be purchased from your longship dock and after getting the Capture Lore, you’ll be able to oppress other faction’s people.
But if by any chance your regular population falls under your Thrall population, they will rise against you!

Sacrifices and Dragon Essence Gauge
The Clan of the Dragon starts each game with an already built exclusive building: the Sacrificial Pyre. You can use this building to sacrifice your people in order to honor the gods and gain their favors, unlocking various bonuses!

Dragonkin and their Altar
The only military camp you’ll be able to build is the Dragonkin Altar where you can create Dragonkins, ferocious military units, that are far more powerful than warriors.

- After mining molten rocks, you could not unassign miners. It has been corrected.
- Relic icon no longer blinks into the forge.
- UI issue with selector on the story mod map.
- You can now unassign villagers from a building on fire.
- Fixed blacksmith switching their post while in no work.
- When you were forging a relic, canceling it and choosing a new one to forge: the anvil icon was bugged.
- Many SFX levels have been adjusted.
- Fixed several UI issues.
- UI system showing the number of villagers assigned in a building has been improved.
- When destroying a building in an area, you should now be able to open the action menu as intended.
- UI for (Buildings / units … ) prices have been harmonised.
- Unassigning a unit from a building no longer displays unassignment icons on all buildings of the same type.
- On Switch, notifications should no longer hide players names.
- An icon for unassigning scout has been implemented.
- Boats should no longer cross the land map.