Two games in one package
by rawmeatcowboy
08 December 2020
GoNintendoGN Version 5.0

The latest series to get a physical release on Switch is Suicide Guy with the Suicide Guy Collection from Red Art Games. Pre-orders open Dec. 10th, 2020, and you can get full details on the package below. 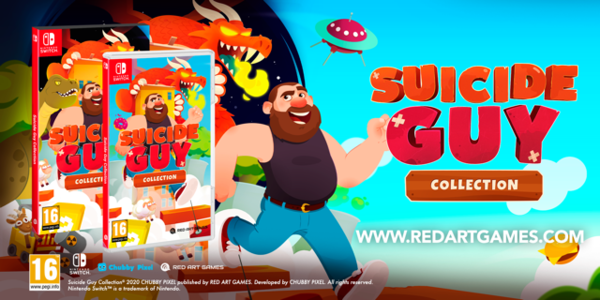 The game is set in the incredible and extraordinary dreams of its protagonist. What would you do in order to save the thing you love most? Immerse yourself into his weird dreams and help him to wake up before it's too late.

• 25 levels set inside Suicide Guy's mind
• Story-driven game
• Physics based levels
• Ultimate moves: be able to pick up items, throw them, activate mechanisms and even burp.
• Funny creatures to annoy
• Vehicles to drive
• An important mission to accomplish
• Collectible items to find

Gamers will have to use different items in every kind of situation by solving original brain teasers. Despite the title, the game is NOT at all about suicide or depression.

In this new chapter of “Suicide Guy” you’ll be challenged with even more insane puzzles, generated by the surreal dreams of the Guy. You’ll encounter the weirdest of the living beings as you go deeper and deeper into his subconscious. This time to wake him up you’ll need all your skills.

• 3 to 4 hours of pure gameplay set inside Suicide Guy’s subconscious
• A whole new story with an unexpected plot twist
• Physics based levels
• Ultimate moves: able to pick up items, throw them, activate mechanisms and even burp.
• Funny creatures to annoy
• Vehicles to drive
• New Collectible items to find

Physical edition on Nintendo Switch
€29,99
Limited to 2800 copies only
Pre-orders open on Thursday, December 10th at 5PM CET on www.redartgames.com