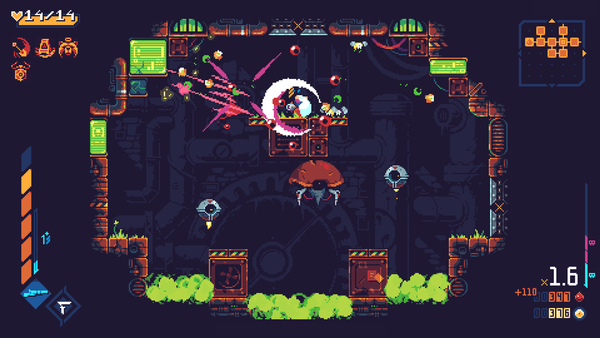 Flying Oak brought NeuroVoider to the Switch all the way back in 2017, and has followed that up with ScourgeBringer just a couple months back. In a new series of tweets, developer Thomas Altenburger of Flying Oak shared a detailed look at sales for both games.

As you can see, NeuroVoider really hit big on the Switch, easily eclipsing the scene on Steam. Here in 2020, it's quite the opposite. ScourgeBringer had a much harder time finding an audience on Switch, while the Steam version is doing quite well. Altenburger elaborates on the situation below.

“NeuroVoider released very early in the [Switch] console lifecycle, and was pretty much alone [in the release schedule]. ScourgeBringer released during the most crowded month the console has ever known (while also performing super well on PC, vs. NeuroVoider’s bad PC launch). ...ScourgeBringer did 4 times less [revenue] than NeuroVoider on Switch, while doing 10 times more on Steam.”

There's no doubt that release timing and the amount of titles on Switch make it harder for games to penetrate. You need major positive press for a chance to make a dent, some serious marketing efforts, great word of mouth, or smartly-deployed discounts. All that said, ScourgeBringer is still early in its days on Switch, so things could even out more as time rolls on.

It's also worth mentioning that a physical version of ScourgeBringer was announced, and people could certainly be holding out for that. It'll be interesting to see this topic revisited a year from now.

If you're still hungry for more stats, you can see Altenburger's full range of tweets on the matter here.