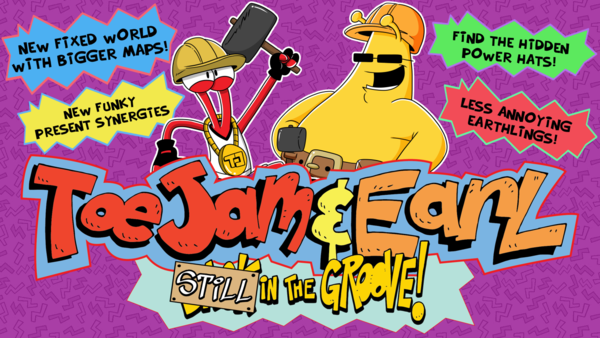 Another big update is on the way to to ToeJam & Earl: Back in the Groove. We don't have an exact date for this "Still in the Groove" update, but we do know it's slated to hit Switch this year. Read full details on the patch below.

Last year we opened the 1.7.0 Update Beta to collect feedback. It's been tough but we are finally ready to show off what we've been working so long on. The Earl sized change we made this time is the new BIGGER Fixed World maps. These maps were handcrafted by the OG funklord Greg Johnson.

While playtesting the maps Greg kept coming up with new ideas and tweaks to make the gameplay more fun!

So first, we heard the feedback about Earthlings being too frustrating and adjusted their behavior to make them a lil more funky to deal with. If you enjoyed the previous Earthling difficulty make sure to check out the Extreme World where the Earthlings are much harder.

Players also didn't like when Power Hats were instantly granted after stepping off an Elevator. Power Hats are now hidden on the map in bushes that sparkle! When you shake a sparkling bush the Power Hat will fly around for a bit before landing. Players can find up to 2 Power Hats per level. So make the most of them while you have them!

Present Stacking synergies are a feature we introduced in 1.6.0 where using certain presents together will make some funky new effects.

There are 3 hidden present synergies that will cause something cool or funny to happen.
Can you find the secret present combinations that unlock them?
We will give you a clue: the presents need to be AMPED.