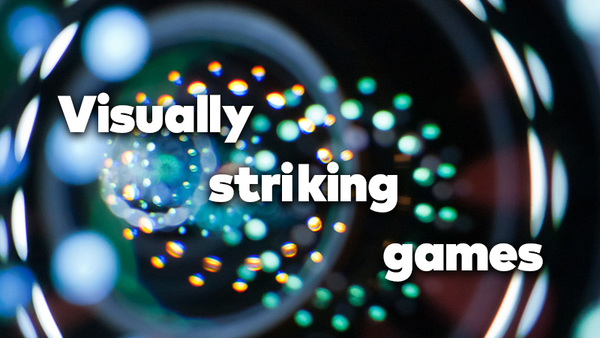 The Switch may not have the horsepower of the PS5 and Xbox Series X, but that doesn't mean it's incapable of playing host to gorgeous games. In today's feature, Nintendo has singled out just a few of the Switch eShop titles they think are visually striking. Check out their recommendations below.

As the immortal Prince of the Underworld, you'll wield the powers and mythic weapons of Olympus to break free from the clutches of the god of the dead. Grow stronger and unravel more of the story with each escape attempt from the ever-shifting Underworld.

Return of the Obra Dinn:

Years after its disappearance, the Obra Dinn has drifted into port at Falmouth with damaged sails and no visible crew. As an insurance investigator for the East Indian Company’s London Office, dispatch immediately to Falmouth, find means to board the ship, and prepare an assessment of damages.

Ori and the Will of the Wisps:

In this action platformer, the little spirit Ori is no stranger to peril. But when a fateful flight puts the owlet Ku in harm’s way, it will take more than bravery to bring a family back together, heal a broken land, and discover Ori’s true destiny.

Take the role of Amaterasu, the Japanese sun goddess who inhabits the form of a legendary white wolf, Shiranui. Use magical abilities, attacks, and Celestial Brush techniques to restore the land of Nippon to its previous glory—full of life and color.

The classic side-scrolling beat-‘em-up series is back! Axel, Blaze, and Adam are teaming up with the next generation of fighters to take down a rising crime empire. Enjoy hand-drawn visuals as you clean up Wood Oak City to the beat of an all-star ensemble of musicians, including the original series composers.

Sakuna: Of Rice and Ruin:

Take on the role of Sakuna, a spoiled harvest goddess banished to a dangerous island with a group of outcast humans. As she explores the hostile island environment, she will find a home in a mountain village, aiming to prove herself worthy of her title by harvesting rice and bettering the lives of humanity.

The kingdom has been ravaged by an origami menace! Join Mario and his new partner, Olivia, as they battle evil Folded Soldiers, repair the damaged landscape, and try to free Princess Peach’s castle from the clutches of King Olly. Use Mario’s new 1,000-Fold Arms ability to pull, peel, and hit specific spots!

Separated from her Granny during a storm, Carto must use her innate cartography powers to map and manipulate the world around her. Discover new “pieces” of the game map, rearrange them to shape the levels themselves, and unlock new paths, puzzles, and story moments.

As Tove, rediscover magic and chart your adventure through this forgotten northern world of mystery and monsters. Find your courage, discover hidden paths, solve ancient puzzles, and travel deeper through the icy land to save your family.

Sayonara Wild Hearts is a dreamy arcade game about riding motorcycles, skateboarding, dance battling, shooting lasers, wielding swords, and breaking hearts at 200 mph. As the heart of a young woman breaks, you’ll set out to restore balance to the universe.

Take a journey as a hopeful young girl, lost in a world of sorrow. As the story unfolds, Gris will grow emotionally and see her world in different ways. Players can explore light puzzles, platforming sequences, and optional skill-based challenges—all without the fear or frustration of death.

Retreating from his messy life, Henry has taken work as a fire lookout in the Wyoming wilderness. But when something strange draws him out of his lookout tower, he’ll explore a wild and unknown environment, facing questions and making difficult choices.

Take an underwater adventure that evokes the dream of diving. Perform fluid acrobatics as the Diver, discover hundreds of species based on real creatures, and interact with schools of fish that procedurally respond to you, each other, and predators.

Build a boat to explore the world, befriend and care for your spirits, and guide them across mystical seas before releasing them to their afterlife. Farm, fish, harvest, and cook as you spend relaxing quality time with your spirit passengers, create memories, and, ultimately, learn how to say goodbye.

OK. HEre's a question. Suddenøy downloading games to the Switch has become extremely slow. I mean Okami wants like 30 hours where as, even with my crap net, it should take less than one. The eShop works fine and is fast, I can watch youtube with no hiccups.... At first I thought the games might be downloaded directly to the SD card, but even when I took it out it's still deadly slow. Any had similar an experience?

Downloading games has always been slow for me. I have 150Mb internet and even the Switch speed test will usually cap out at 20-25Mbps. I know the WiFi chip in the Switch is pretty poor.

Not sure why you’d be seeing a recent difference though.

But was it always so slow? Mine used to be great....

Well, I live light years away from Nintendo's servers so it's always been slow.

So far it's been great. Great download speeds on my garbage net (sorry net, but you are a bit slow), so I just don't get it. Guess I'll just have to write to Ninty and ask...

I had similiar problems once or twice and it always turned out to be some issue with the router and such, even if it didn't look that way at first.

But only when it comes to game downloads from the eShop? Youtube and surfing the eShop works perfectly fine. That's the odditiy here.

It only affected the downloads for me as well (at first). It was incredibly weird and I even contacted Nintendo about it, though they suspected my network to be at fault.
After roughly a week Youtube videos started to not load properly before everything went down the drain.

I see. What did you do to solve the issue then? I'll try to reset my router sometime at least. Thanks for the heads up!

Unfortunately I had to replace my router both times, as resetting didn't help anymore. Probably not what you wanted to hear I guess.

Well I guess it's better than waiting 40-ish hours for a game like Okami to download. Then again, the Switch IS a hybrid so I can take it to a friend's house if needed. Everything else works.

Anyway. THanks a bunch =)

Hollow Knight deserves a spot on this list for sure!