Plenty of bonus content to come
20 January, 2021 by rawmeatcowboy | Comments: 0 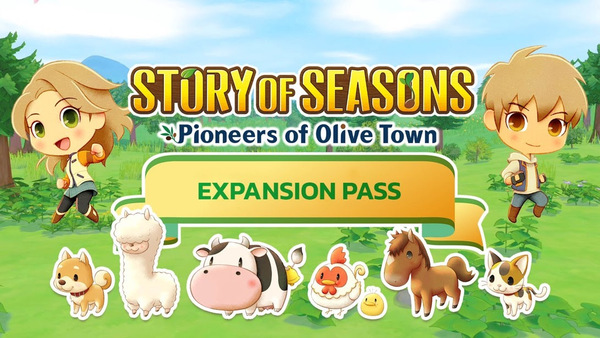 If you plan on sinking a ton of time into STORY OF SEASONS: Pioneers of Olive Town, you might want to think about picking up the Expansion Pass bundle. Wondering what that includes? Read the press release below to get a full breakdown.

XSEED Games, the independent-minded publishing brand of Marvelous USA, Inc., today revealed details about the upcoming DLC that will be available for STORY OF SEASONS: Pioneers of Olive Town following its launch on the Nintendo Switch™ system in North America on March 23. This bounty of extra content for the latest entry in the popular farming/life simulation franchise, currently celebrating the 25th anniversary of the release of the original Bokujo Monogatari title in Japan in 1996, will enhance players' experiences with new areas to explore, characters to befriend, and outfits to show off.

An ‘Expansion Pass’ featuring content to be released in waves in the months following the game’s launch will be available digitally for $19.99, or as part of the STORY OF SEASONS: Pioneers of Olive Town + Expansion Pass Set for $69.99. The digital standalone edition of STORY OF SEASONS: Pioneers of Olive Town will be available for $49.99, and both the standalone and game + expansion pass set will soon be available for pre-order on Nintendo eShop.

‘Animal Attire’ costumes for the protagonists and marriage candidates
‘Olive Town Mystery Files’ sub-scenario - Join Mikey and Cindy to discover the cause of strange incidents occurring across Olive Town in the very first mystery scenario in the STORY OF SEASONS series!

‘Yukata Set’ costumes for the protagonists and marriage candidates
‘The Legendary Sprite Dance’ sub-scenario - The Earth Sprite Village is livelier than ever, and the sprites are determined to revive their legendary dance and hold a feast…with or without Boss Sprite’s permission!

‘Twilight Isle Expansion Pack’ - Sail to an island bathed in twilight and meet the four characters from STORY OF SEASONS: Trio of Towns that have made it their new home (includes two marriage candidates)

Specific release dates and additional details about all of the DLC arriving for STORY OF SEASONS: Pioneers of Olive Town will be released at a later time.

Developed by Marvelous Inc. and published by XSEED Games in North America on the Nintendo Switch™ system, STORY OF SEASONS: Pioneers of Olive Town will launch on March 23, 2021. The ‘Premium Edition’ and a standalone retail version are available for pre-order from the XSEED Games Store and participating retailers for a MSRP of $59.99 and $49.99 respectively. The title has been rated “E for Everyone” on the Nintendo Switch by the ESRB.