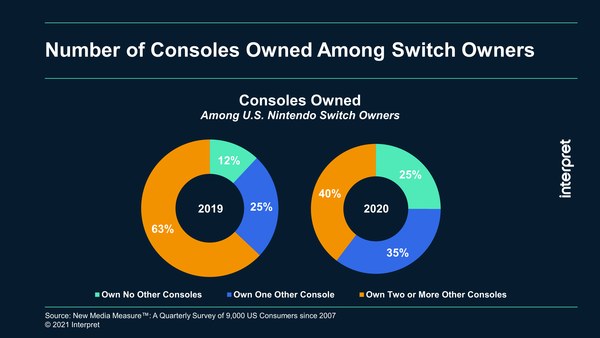 Consumer insights agency Interpret has put out a new report that shows just how big the Switch's success is. The platform is in 70+ million homes, and it's reaching new areas of the market in some major ways. Much like the Wii before it, the Switch is also helping to expand the console market in general. Check out some details from the report below.

- before the holiday shopping rush, Switch hit 68 million units sold worldwide through September
- a year before that, the install base was at a little over 41 million units,
- this means Nintendo sold through another almost 27 million Switch consoles during that time, a 64% increase overall
- the Switch has been outselling both the Xbox One and the PlayStation 4 every single month for the past two years
- in 2019, only 12% of Switch owners had no other console in their household
- in 2020 that figure more than doubled to 25% of Switch owners
- there's a likelihood that consumers age 45 and up drove a good portion of spending on Switch
- the 45-65 age group emerged in 2020 as a key demographic, spending 15% more on games than in 2019