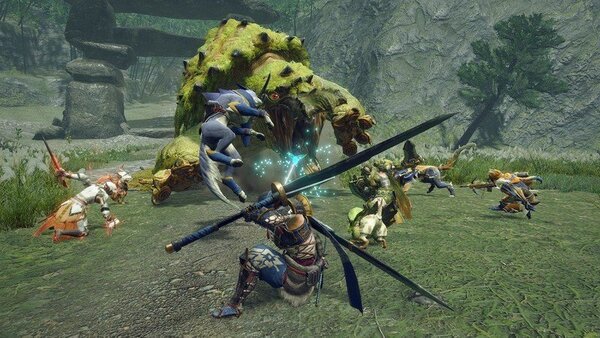 Giant monster battles are obviously the focus in Monster Hunter Rise, but the game's soundtrack goes a long way in making those battles feel a lot more epic. Capcom recently shared an internal interview with Monster Hunter Rise sound director Kosuke Tanaka and lead composer Satoshi Hori to get more details on how the soundtrack came together.

Mr. Tanaka opened up about his overall goals for the soundtrack, which you can read below.

The general theme for the sound was “catchy and easy to understand.” If the sound design for Monster Hunter: World and Iceborne could be described as “Art with delicate layers,” then I’d say the sound design for Monster Hunter Rise is “to convey everything with one concentrated effect.” That’s what we were going for. Also, we wanted to treat past titles in the Monster Hunter series with respect, so although there are a lot of new sound effects in this game, we’re intentionally using some nostalgic sounds as well.

What instruments went into crafting this soundtrack? Tanaka described the setup and how they were used.

Oh yeah, we recorded a whole bunch of traditional Japanese instruments: shakuhachi, shamisen, shinobue, and koto of course, but also biwa, hichiriki, ryūteki, taiko, atarigane, Kagura suzu, and horagai. There’s even some very unusual instruments in there that you normally wouldn’t hear outside of special occasions. On top of these Japanese instruments, we also recorded live orchestral performances in order to convey the strength of the monsters and the scale of the world in a way that you would expect from a Monster Hunter game. The orchestral performances were carried out in Japan, LA, and London, depending on where the music was going to be used and which monster theme we were recording. For particularly fearsome monsters and music that required a large sense of scale, we mainly used Abbey Road in London. Apart from the huge collection of instruments, we also recorded several songs in a variety of genres.

This is just one snippet of an interview all about the music and sound of Monster Hunter Rise. You can read the full interview here.