Sam & Max Save the World Remastered updated to Version 1.0.3 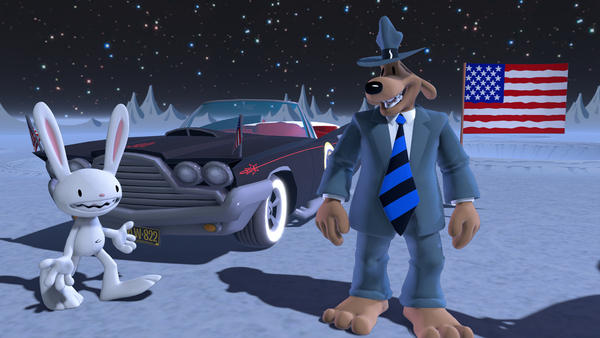 Sam & Max Save the World Remastered has been updated to Version 1.0.3. Check out the patch notes for this update below.

Updated subtitle colors to be more readable, and added option to draw a background behind subtitles (in Gameplay Settings)
Added option to disable v-sync (in Graphics Settings)
Replaced repeated Max voice lines in episodes 2-6 with William Kasten instead of Andrew Chaikin, and updated lip sync animations
Fixed points where scene music was not resuming after cutscenes
Fixed mouseover pop-up text splitting in the middle of a word
Fixed a small seam in Max’s belly visible on 4K monitors
Fixed a foreground car clipping through the camera when looking at the One Way sign on the street in episodes 2 and 3
Fixed inconsistencies with lettering on the awning outside Sybil’s
Fixed missing license plate textures on background vehicles (“DRG DLR” rejoins “RMS DLR” and “CON MAN”) and updated the license plates to match style of the DeSoto’s license plate
Fixed Czech translation of “Presents”

Fixed retreat music still playing during laser room cutscene
Fixed Sam standing up during finale when examining an inventory item
Fixed street not scrolling during end credits
Fixed Max teleporting after using gastrokinesis on Leonard
Fixed Director’s gun missing in closing credits
Fixed Sam picking up an invisible Deed
Fixed the Lunar Lander leg turning invisible at an inopportune moment
Disabled skipping dialog during the closing credits
Re-added some of the conversation with Bosco talking about his “mom” disguise (since this is a change to game logic, the new line won’t show up in a save game where you’ve already asked Bosco about his mother; in that case you’ll need to start the episode over)

I wish they would re-add the non english voiceovers.