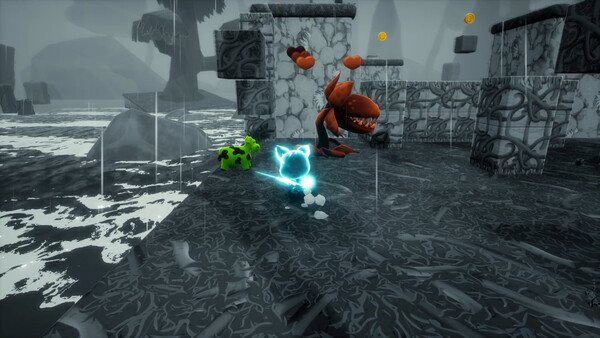 The team behind Neko Ghost, Jump! has announced that they've received an Epic MegaGrant, which will help them not only add new content to the game, but fine-tune what's already been included. You can read more about the Epic MegaGrant and the game itself in the press release below.

Burgos Games is proud to announce that they were awarded an Epic MegaGrant for use on their game Neko Ghost, Jump!

With the additional funds, it enables the studio to include additional content and polish that will further enhance the quality of the gameplay experience. This is in addition to the funding Burgos Games received with their success on Kickstarter back in mid-2020, in which they raised $20,052.

Utilizing Unreal Engine 4 since the game jam prototype back in 2019, the studio recently released a new video showcasing the game's progress since then:

Neko Ghost, Jump! is a pawsome puzzle-platformer that tasks players with switching between 2D and 3D camera perspectives as they guide Nekoman on an epic quest to rescue his bride-to-be, friends, and family from the evil Space Dog Pirate Boss and his minions. This adventure will take Nekoman across several biomes ranging from grassy plains to snowy tundras, to sweltering deserts and beyond. Along the way, players will have to not only switch between 2D and 3D planes but also between their physical and ghost forms to defeat any baddies along the way as they pounce across a series of entertaining yet challenging obstacles that will test their spatial awareness to the limits!

Neko Ghost, Jump! will run the gamut from an accessible family-friendly affair to a furmidable challenge for more masochistic players. Players will have the choice to use the playstyle they want to advance to later levels. Race against the clock trying to beat the speedrun time, take your sweet time and collect all the coins in the level, or for those that prefer no-fuss all action, just whack your enemies into oblivion with the swordfish. Use the loot collected in each level to not only take some time off the clock but also turn it in and customize Nekoman’s appearance with plenty of options available. Give him sweet specs, a dapper hat, or some shiny bling!