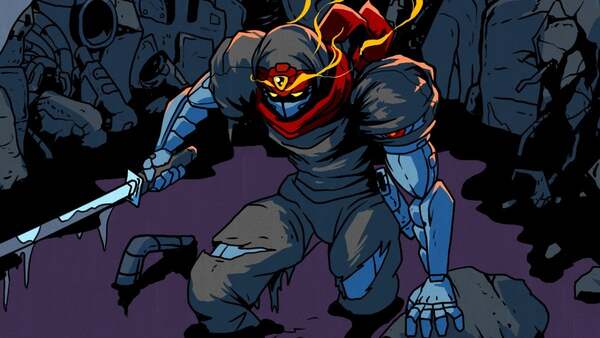 Cyber Shadow has been updated to Version 1.03. Check out the patch notes below.

Improvement: Apparitor now drops more Essence depending on your Essence level. This should help assist players needing to purchase items at nearby checkpoints to aid your adventure.
Improvement: Overall HP/SP rates have been improved.
Improvement: Bullets now get destroyed if they pass through Shadow while in i-frames
Improvement: Adjustments in difficulty for Rust Fly Elevator in Chapter 2 and Chapter 7 areas
Improvement: Added flickering effect for items that expire
Improvement: You can now Dash after Airstriking
Improvement: Allow parry when in i-frames

Fixed: Collecting a health item immediately before falling into a pit will keep you from dying
Fixed: Performing a Dash immediately after a no-SP Dash would result in a slow movement speed but a fast Dash animation
Fixed: Dying on the same frame as Laserbrain makes the tri-key upgrade unobtainable
Fixed: Incorrect syntax for “Press X to Start” in Spanish
Fixed: Swag Blade was causing lanterns to get destroyed in the monkey race challenge
Fixed: Special items could activate triggers in CyberDrive sequences
Fixed: A cosmetic effect where Airstrike would appear to penetrate through a door
Fixed: General level design improvements where you could sometimes move outside of the camera boundary
Fixed: Apparitor’s name not translated during EXO encounter
Fixed: Instances where the player could Dash-slash enemies that just transitioned into solids, allowing Shadow to pass through solids in some rare instances
Fixed: Shadow could move out of bounds during the boat sequence after having destroyed the corrupted core
Fixed: Orbiter fixes to prevent orbiting orbs from getting stuck at expanded sizes
Fixed: Issue with CRT filter where white values weren’t being clamped correctly