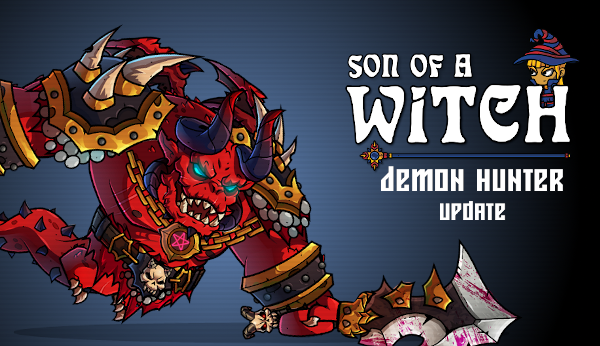 Novi Sad, Serbia - Feb 12, 2021 - The developer Bigosaur is happy to announce that the free Demon Hunter expansion for Son of a Witch is nearing the end of beta testing access and will be released on Steam for PC, Linux and macOS on February 25th. The Nintendo Switch release is coming later this Spring.

Son of a Witch is an action roguelike for 1-4 players with focus on weapon and item combos similar to The Binding of Isaac. With optional permadeath, various difficulty levels and cute art, it's perfect to co-op with your SO. The game has been featured by IndieCade, and various European festivals like IndiePrize and GameAccess.

The Demon Hunter expansion is the biggest update to the game since it's release. It features:

The indie solo-developer behind the project, Milan Babuskov, said: "The new Demon Hunter expansion will be free for all the players who own the base game, but there's a possibility of the base price increase after the release. I'm thankful to all the players who are playing and giving useful feedback. It makes me still want to add new free updates, even though the game released a couple of years ago".