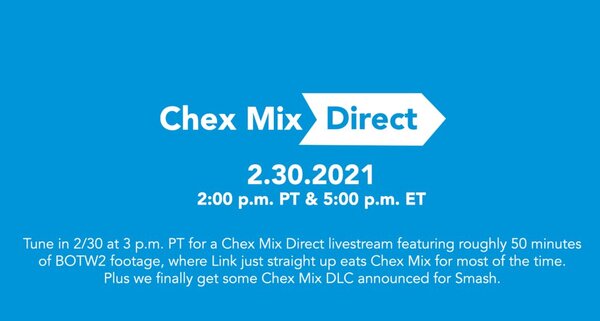 It's been 529 very long days since we've had a proper Nintendo Direct, but the counter is about to reset tomorrow. Nintendo fans the world over are beyond excited, causing all sorts of Nintendo-related topics to trend on social media. There's no doubt other brands have caught the buzz, and they're eager to cash in for some clout of their own.

Case in point, the above tweet from Chex Mix. The snack food brand has spoofed Nintendo's Direct announcement with a Direct of their own. Obviously the entire thing is a joke, but it's a pretty harmless one. It would be funny to see Chex Mix actually go ahead with some sort of live-stream, but since their message above is listed as taking place on the non-existent Feb. 30th, it seems this is all tongue-in-cheek.

I've never heard of Chex Mix before, it must be an American thing.

Maybe we can expect a Chex Quest announcement!!! My fingers are crossed!

"Chex Questor's in the mix!"

things up, but would leave some people feeling
Spoiler
salty.

Ugh... the puns... also, pretty sure the Chex Quest guy has a name now... they made an HD version of the game recently... apparently it's free to play too.