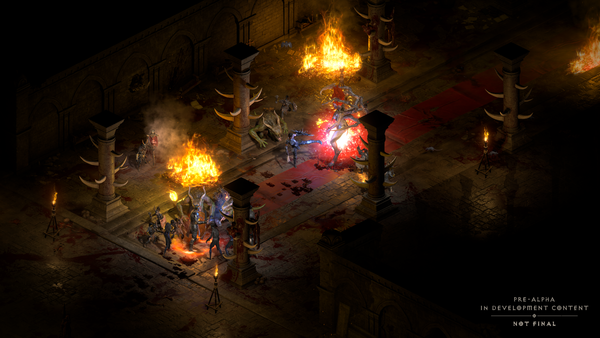 “This isn’t a remake. We’re not reverse-engineering it; we’re not rebuilding it and trying to make it look and sound like [Diablo 2]. This is [Diablo 2]. [...] It’s right there, underneath the surface. The entire simulation, the engine for this game, that lifeblood of this game, is [Diablo 2] right underneath. So there’s a toggle switch, a legacy toggle, that when you press the button, you’ll see behind the curtains, and there is Diablo 2 in 2D sprites running right there, and you can play the way that you played 20 years ago.”

This is the perfect way to bring some fresh visuals to old games that were already like as good as perfect at its gameplay core. Not sure if this game had that kind of strong gameplay, but this method should be great for games like that.

It'd be nice if Nintendo put an effort like that for their old Zelda and Mario game rereleases. But they probably won't really do much as long as we keep buying the same games over and over again in a more or less unchanged state with every new machine they come up with.

I think it is more fun to play the unchanged games on their original hardware anyway. It'll give a console back its value if we can keep these games generally there in its original form. Many many millions of good old consoles will be given back their original value this way.
I think it might be nice if there'd be only new stuff for new consoles, and more service and a more opened up environment for creation to the older consoles.

I agree completely. You can’t really make a remake of something like Super Metroid or A Link to the Past much better as I find them about perfect from a gameplay standpoint... but I’d absolutely eat up something like this that simply overlays modern visuals on top of them with some other QoL updates.

I feel the same way about Diablo II. It’s in my top 10 favorites so I’m happy they aren’t messing with it. I’m sold.