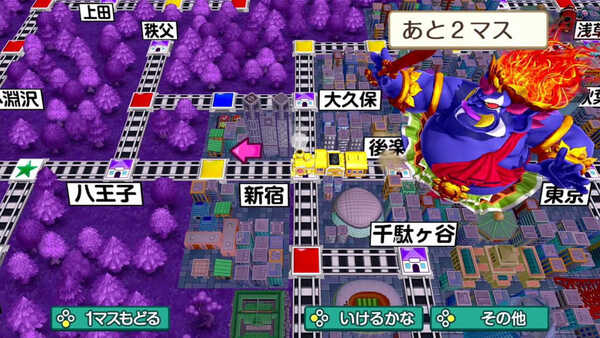 You may have noticed that Super Mario 3D World + Bowser's Fury was the number 1 best-selling game in Japan this past week, bumping Momotaro Dentetsu: Showa, Heisei, Reiwa mo Teiban! to second place. That ends a sales streak for Momotaro Dentetsu, and a majorly impressive one at that.

Momotaro Dentetsu: Showa, Heisei, Reiwa mo Teiban! was the best-selling game on the Japanese software sales charts for 11 weeks straight. That makes it the game with the longest #1 sales streak in Japan in 20 years!

With Mario likely to hold onto #1 for awhile now, and heavy hitters like Monster Hunter and New Pokemon Snap on the way, it's doubtful Momotaro Dentetsu will regain the top spot. Still though, a majorly impressive run, and it's clear the game still has a lot of life left in it.

This wouldn't be a game you'd imagine would set records, but fair play. Though it didn’t have any serious competition during that time.

Actually, there are two Momotaro series, both with the same characters: Momotaro Densetsu (the original one based on the Japanese Peach Boy legend) and Momotaro Dentetsu (the one that plays like Monopoly with Japanese trains).

The Dentetsu series is the popular series between the two. Once upon a time in Japan, Momotaro was one of Hudson Soft's mascot along with characters like Bomberman and Takahashi Meijin (Master Higgins).

So there is a game with Momotarou, dog, monkey and bird fighting the Onis? I would seriously love to play that =D

Thanks for the heads up, Hammer! Love tidbits like these =)

Yes, there is a series of Momotarou games that are just basically Dragon Quest clones that started with the Famicom. If you're going to play one, I'd wager the SFC installment is probably the one to try, as it was the last home console installment in the series.

If you're trying to learn Japanese with it though, I believe it uses an older style of 日本語 (which makes sense given the time and topic) so it may be difficult to understand if you're not already advanced. If you're starting off, and have no problem accessing some Japanese games via emulation: Wagyan Paradise for SFC has an easily comprehensible story and the bosses are basically Japanese word games. Picross 3D (and its sequel) is also pretty good for Japanese learners because you learn the word of the figure you make, but you also get a fun little trivia fact about each figure, and translating that on your own makes the trivia stand out more (I still remember the trivia for Dachshund blowing my mind). Outside of that, it's a little more advanced, but the Japanese version of Shadowrun for SFC is interesting since all face-to-face dialogue in that game has both the Japanese text and English text displayed at the same time. I guess it was easier for the Japanese localizers to program that way. And on your Switch you can switch to Japanese language and most Nintendo games use furugana, which will make reading easier for you if you find Kanji difficult.

If you really get good at Japanese and want a game solely focused on the three companions of Momotarou, check out 平成新鬼ヶ島. It's an updated SFC version of a Famicom visual novel, but if you get to the point where you can comprehend it, the writing is really flowing with personality. Same for ファミコン文庫:はじまりの森. That one's also got some real charm and the Japanese is not too complex. It's really never been easier to use Japanese games to supplement your language studies!

Don't know if you wanted these recommendations, but now you got 'em! がんばって！

To put things in perspective: I basically get the two genki books and am reading a bit of the Tobira book I found. Boosting my kanji and vocab skills with everything from genki, stories from the japaneseshop (where one of my fav stories is momotarou) and wanikani, NHK etc. Also got a private teacher now, but that's a once a week tak I really need since I am doing it alone (as so many others). So within this year I should be good to go for a N5 or even N4 level.

But thanks a bunch! I'll have to check all these out it seems

Awesome! I'm also self-taught. Don't overextend yourself, but for me the best thing to learn kanji was Heisig's Remembering the Kanji Vol. 1 paired with Kanji.koohii.com and Anki. I don't know how far into my Japanese journey I would have gotten if I didn't learn all the kanji first. I don't know what your current vocab level is at, but if you're at less than 400 kanji, I would strongly recommend it.

Heisig basically uses the 部首 (aka radicals), gives them names that are either directly related to their actual meanings (like the three short strokes on the left of 沼 is actually is a truncated form of the water kanji 水, and sure enough this character means something related to water: swamp) or based on what they sort of look like, and then implores you to create your own story relating the parts with the overall meaning. Regardless, it took hard studying every single day for a few months, but I learned the writings and meanings of the 2000+ 常用漢字 in a little less than 4 months, and then I learned most of the readings after that. But it made every new word much easier to learn (I did go through both Genki books after that) because you already have a key definition associated with practically every kanji you'll ever see, and also gives you a method to approach any new kanji you deem fit to learn outside of the 常用漢字. This helps organize the logic behind the majority of compounds you'll encounter in some form (seabed: 海底 "ocean bottom", cafeteria: 食堂 "eating hall", review: 復習 "restore learning" etc.). Most words can have their meanings deciphered based on the characters, or at least make some kind of sense in hindsight when you know the definition (like water + road is water supply 水道. Like "Oh, like as if there's a road of water that supplies my house directly" sort of thing. And then it makes more sense when you learn "sewer" is "below + water supply 下水道")

That's what I'd recommend if you do want to eventually play through story-focused Japanese games that are text-heavy, like FF6, but also games that never came out here because they were "too Japanese" like the two Phoenix Wright games set in the Meiji era, or the fairly comical Tengai Makyou IV which is a JRPG set in 1890s Wild West America (I have that one for my Saturn as well 😉).

Kanji can seem daunting, but honestly, I've been learning Japanese for years and there's still been no prouder time for me than in that first year when I walked into a Japanese goods store and even though I didn't know the readings, I knew what every character I saw meant and understood the gist... that or the time a Japanese friend challenged me to a kanji-writing contest and I won. 👀

Regardless, learning Kanji is often the biggest struggle for many learners and I'd urge you to develop a strategy to deal with them. There's a few hundred of the 常用漢字 that aren't very 常用, but there's still a good 1700ish that really are used frequently and, for me, the Heisig method + Anki + Kanji.koohii.com (a website meant to be used alongside Heisig's method) were very, very effective. It just takes consistency and dedication. Which can be hard depending on what your personal life and obligations are, but if you stick with it, use each opportunity to practice that you can, then one day Japanese people will actually mean it when they say to you 日本語が上手です!

EDIT: Oh and imiwa? is a great Japanese dictionary for your phone since it doesn't need the internet to search, and comes with loads of example sentences and other useful features. The only drawback is it takes up a gig of space and there's no "drawing" a kanji option (you can search by radical though). Just another suggestion. 😅

P.S: I've got a Japanese Saturn and a Sumer Famicom with lots of games... I still am a bit away from playing Final Fantasy 6 in Japanese, but I'll get there =)