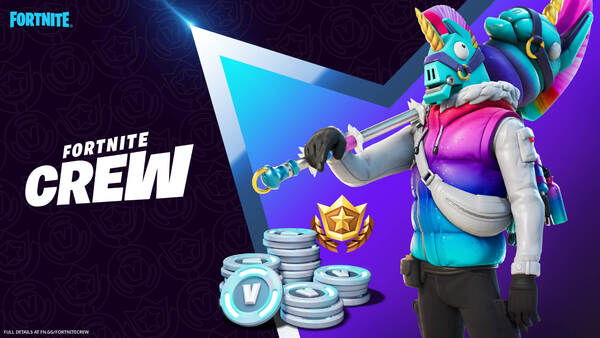 Epic has revealed the next round of content exclusive to Fortnite Crew members, and it's something longtime Fortnite players will certainly appreciate. The Llambro is making his way back to the game as a Crew Pack goodie, along with some other content. Check out full details on the package below.

Puffed up and prismatic, a stylish new figure makes their Fortnite Crew appearance.

Headlining the March 2021 Crew Pack is the horned llama Llambro, llegendary in both being and attire. Going live for active Fortnite Crew members at approximately 7 PM ET on February 28, the March Crew Pack includes the Llambro Outfit, the sporty but elegant Up North Back Bling, the inflatably-tailored Puffcorn Pick Pickaxe, and the abundant in color The Llegend Wrap.

MORE FORTNITE CREW BENEFITS: SEASON 6 BATTLE PASS, MONTHLY V-BUCKS, AND THE FEBRUARY CREW PACK!
The Crew Pack is only one benefit for Fortnite Crew members. Subscribers always have instant access to the current Season’s Battle Pass, which means active subscribers during the launch of the Chapter 2 Season 6 will automatically get that Season’s Battle Pass! (At no additional cost.) Also, active subscribers receive 1,000 V-Bucks every month on the day of their billing date*.