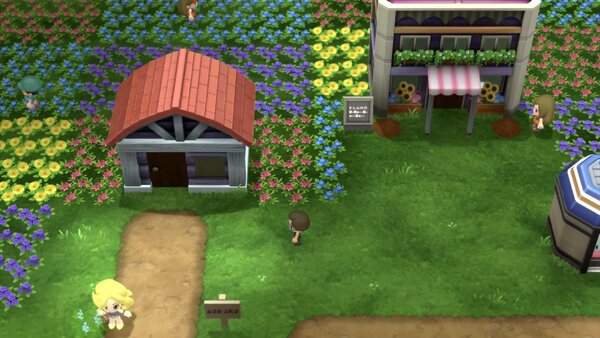 Eagle-eyed Pokemon fans caught something interesting in the debut trailer for Pokemon Brilliant Diamond and Pokemon Shining Pearl. At one point, the trailer shows an extra NPC in Floaroma Town. While this character wasn't in Diamond or Pearl, they were in Platinum, the third title in that series. This character gives you Gracidea if you have Shaymin in your collection. This character popping up in the trailer is pretty indisputable evidence that Brilliant Diamond and Shining Pearl will include at last some Platinum content.

That's good to see. I was (and still am) worried they're going in a "Platinum Expansion DLC" direction, particularly for mini campaigns. DLC or not, I wonder if we'll get to finally experience the Hall of Origin scenario that was fully scripted and coded, but never utilized...

I believe it will be included in the game or added for free later.
Sword and Shield's DLC was a replacement for a third version. And that's something the remakes never had.
Also, the remakes, despite being split into two versions, are based on the third version and sometimes get some extras as well. So this news is not surprising, I believe.

I wonder if we'll get to finally experience the Hall of Origin scenario that was fully scripted and coded, but never utilized...

Stop, I can only get so erect.

Was there any difference in the Platinum version? Asking cause I only played Diamond. I mean even Giratina can be gotten on one of the versions still beside the new form.

The difference wasn't that big if you only look at the story. Instead of facing Dialga/Palkia at Spear Pillar, Giratina shows up dragging Cyrus into the Distortion World, a parallel dimension where directions are pretty messed up. You follow them and face Giratina in its new form after traversing its realm.
Aside from that there were many smaller changes like the NPC mentioned in the article.
Personally I expect the Giratina content to be a post game story.