An #IndieWorld showcase livestream is headed your way! Tune in 17/03 at 6pm CET to check out about 20 minutes of information on indie games coming to #NintendoSwitch.

Just like Nintendo being a little late to the party on some technologies and such, GoNintendo is finally (officially) on Discord ! ... yeah, probably a year overdue... meh, it happens.

The IRC room for the time being isn't going away. There's a bridge setup so the room is piped to the Discord server and the other way around through my porygon bot. But, all good things must come to an end eventually. "Sometime" in the future, I can see IRC being retired.

Anywho, the chat page has been updated to include the invite link to the Discord server as well as the web chat for legacy IRC. The sidebar of the site also has a direct link to the invite by clicking on the little Discord icon.

The "plan," at least what I hope will happen, is podcast chat this coming Saturday can be had in the Discord. There is a dedicated podcast room for this purpose.

Hope to see you there.

Site Update: Hide Blocked Users Without Being Logged In

This list allows you to block/ignore user comments. While browsing the site, you will not see any comments from users on that list, they will not be able to reply to your comments, and they won't be able to send you PMs. But, there's just one issue (for some). The list only works if you're logged into the site... until now.

While editing your foe list on your profile, you will now find a custom launcher URL just for you: 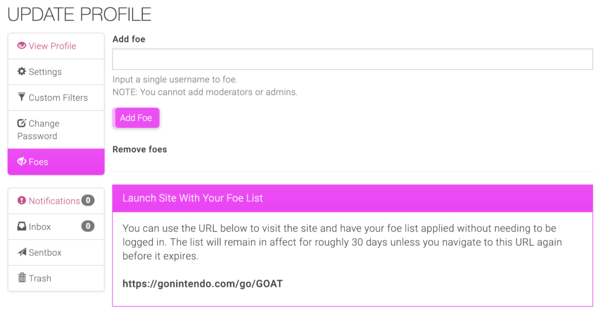 While not logged in, you can visit the site via that URL. A cookie will be set that will give the site just enough information to load up the foe list for you. You'll still be logged out and unable to comment or do the normal stuff that you'd be able to do while logged in, but all comments on your foe list will be automatically blocked. For those who prefer to visit the site not logged in, I recommend using that URL as your bookmark.

The cookie is supposed to last for 30 days, so technically you only need to visit the url once... but I recommend always using that URL to visit the home page if you do not plan on being logged in as session screw ups happen and the cookie may become invalid.

Have a happy non-denominational winter-related holiday! 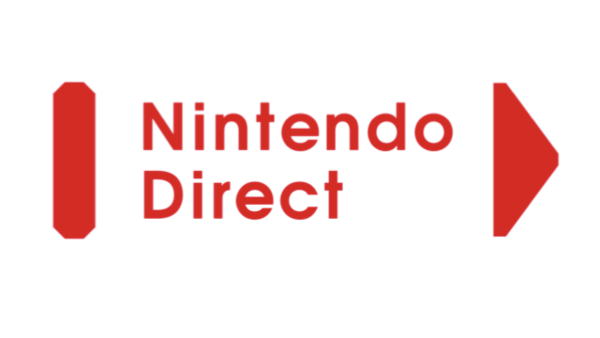 The Nintendo Direct initially scheduled for 9/6 will now debut this Thursday, 9/13, at 3pm PT. The broadcast will last approximately 35 minutes, and will feature information about upcoming Nintendo #3DS and #NintendoSwitch titles.https://t.co/vZbh2Ng6u1 pic.twitter.com/rwQXYOCIzu

Site Updates: Rules for Foe-ing and Tweaks to Reporting

A couple changes regarding blocking users and reported comments have just been implemented.

GoNintendo has a user blocking system (also known as "Foes"). See those little eye icons with a line going through them on comments? This allows you to block a user. You may also block and manage your blocked users in your user profile.

Blocking a user does the following things:

All that said, the following tweaks to the system have been put into place:

Be aware that the above timings may change in the future (read: Probably as soon as cortjezter finds my code)

Like always, you are never able to block story writers such as Rawmeat and Nintendaan or moderators such as cortjezter. (Protip: While I do have admin powers, I'm in neither of those groups... just putting it out there)

Finally, the following changes have been applied regarding reported comments:

As always, if you experience any problems, feel free to let me know in comments or on my Twitter. I also get notified on every site error that happens, so if you get a "BSOD page" for whatever reason, I'll know about it.

Want to help contribute something back to the site? Be a podcast curator!

For a while now, the site has a Podcast Archive page making every* episode available.

Each episode on the site includes some additional meta data such as Pokemon name, who was on the episode, music score, etc. While a good amount of that data is more or less automated and populated on the site automatically within a day that RMC publishes new episodes, some of that info is missing. There's where you come in.

I think it would be great if the data on the site regarding the Podcast can be the source of truth for information on each episode. To do that, I need a couple podcast fans to help curate the data. You'll get a custom rank and user color for the site!

Join us in the IRC and watch together!
Rating: 0

UPDATE: ...and done. All URLs should redirect to https now. There's still some more work to do to get the site 100% over to SSL, but that'll be implemented over time through this evening and Sunday. If you've made it this far, you should be golden. Though there may be times when the site logs you out due to my tweaks so... sorry. Hit me up with anyone experiences issues. T27duck here [Avoids tomatoes being thrown at him] with a quick heads up.

The server GoNintendo and GoingSony is going to head into a maintenance period a little after 6PM ET. Hopefully I'll be done with my work no later than 7PM. The site may be unresponsive or just flat out broken until I'm done.

If all goes eventually well, the plan is to switch the whole site over to SSL. You may be logged out of the site and will have to log back in when the maintenance is over.

Feel free to hit me up on Twitter @t27duck if you have issues after the maintenance is complete.

Some planned server maintenance will happen at about 9PM ET tonight. Should be complete no later than 9:30 if all goes well. During this timespan the site may be unavailable for a short period.