Check out the opening movie for The Legend of Heroes: Trails of Cold Steel IV

Nihon Falcom has shared the Japanese opening movie for The Legend of Heroes: Trails of Cold Steel IV, which launches for Nintendo Switch in Japan on March 18th, 2021 (April 9th in NA/EU and April 16th in Oceania). Check it out via the YouTube link above.

The latest Switch Online free trial event for Japan has been revealed. This time around, members can enjoy Ultimate Chicken Horse in its entirety from January 25th to February 7th, 2021. As usual, there will be a sale on the full game (35% off) after the free trial event for those who want to enjoy the game longer.

Persona 5 Strikers is full of dynamic all-out-action! The Phantom Thieves are travelling to a whole new level.

Persona 5 Strikers takes players on an epic road trip with the Phantom Thieves, where they strike back against the corruption overwhelming cities across Japan. A summer vacation with close friends takes a sudden turn as a distorted reality emerges; reveal the truth and redeem the hearts of those imprisoned at the center of the crisis! Persona 5 Strikers comes to Nintendo Switch on Feb. 23. 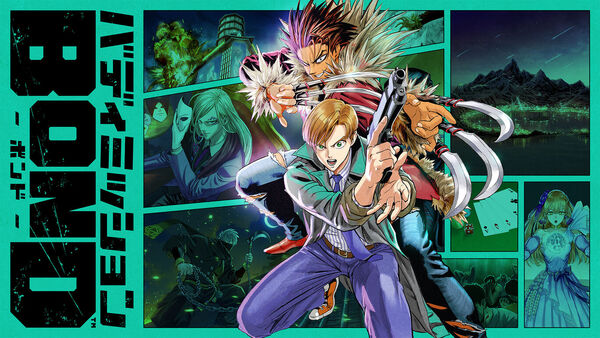 Nintendo has released a free downloadable demo for Buddy Mission: BOND on the Japanese Switch eShop. This trial version can be downloaded worldwide using a Japanese Nintendo account. Check out the eShop page here for screenshots and more details.

Buddy Mission: BOND launches for Switch in Japan on January 29th, 2021 from Nintendo and Koei Tecmo. An English localization has not been announced.

Four more videos for LoverPretend have been released. The otome visual novel from Idea Factory is set to launch in Japan on March 25th, 2021. No word on a localization at this time.

Citizens Unite!: Earth x Space pre-orders now open on the eShop with a 10% off discount 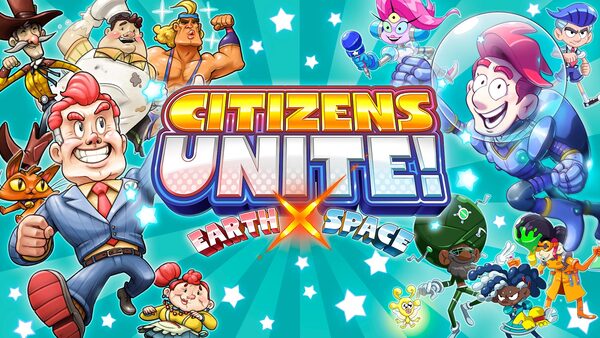 January 15, 2021 - KEMCO proudly announces that the pre-order of Citizens Unite!: Earth x Space for the Nintendo Switch™ system set to hit the North American, European and Australian Nintendo eShop on January 28th has started today. Standard price is USD 29.99 / EUR 29.99, but it will be made available at 10% off for a limited time during the pre-order period starting today!

Overview
Citizens Unite!: Earth x Space includes “Citizens of Earth”, where the rookie Vice President and fellow Citizens investigate the strange mysteries cropping up all over Earth, and “Citizens of Space” where the Earth’s new Ambassador embarks on a journey to find the missing Earth with the help of Citizens across the galaxy.

This time the two adventures have united with brand-new elements. Recruit 88 Citizens with unique abilities to save the Earth in both time-periods! Time travel back-and-forth between “Citizens of Earth” and “Citizens of Space”, unlocking new content and revealing the true ending!

Unite the Citizens to save the timeline from secretive foes operating behind the scenes! 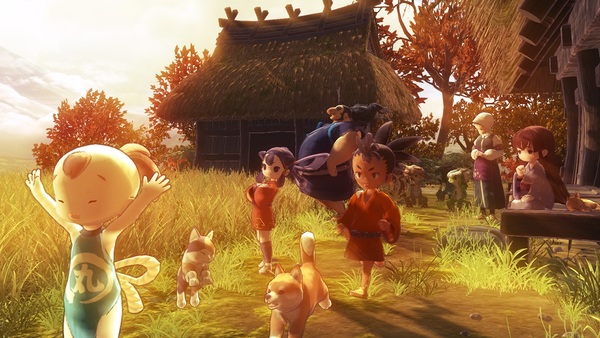 Meet the Bachelors and Bachelorettes of STORY OF SEASONS: Pioneers of Olive Town, which launches physically and digitally on the 26th March 2021 for the Nintendo Switch.

Dec. 2020 NPD: Half of the top 20 best-selling games were published by Nintendo, Switch the best-selling hardware for the 25th consecutive month 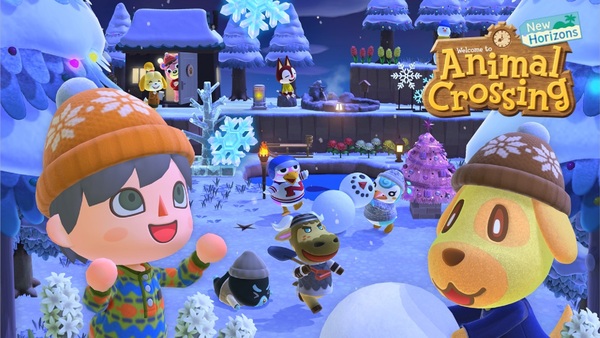 The software and hardware sales for December 2020 (and 2020 as a whole) are in! Here's what was big in the United States last month/year, thanks to a rundown by Mat Piscatella from The NPD Group. 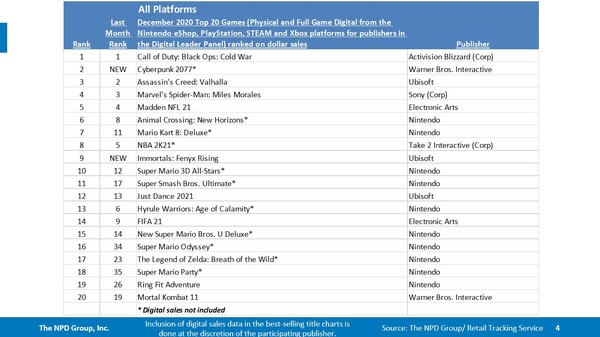 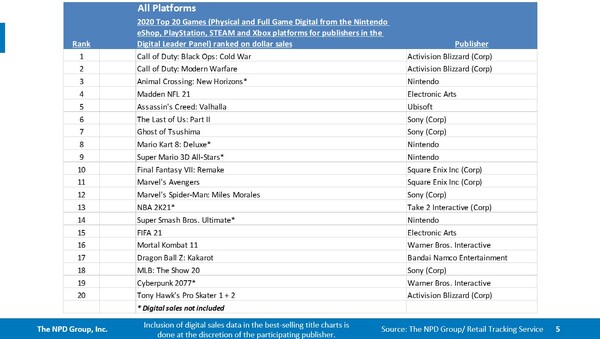 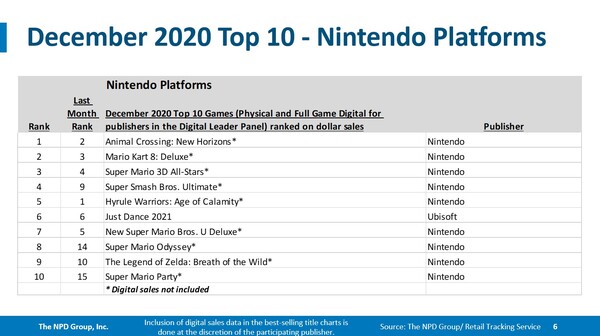 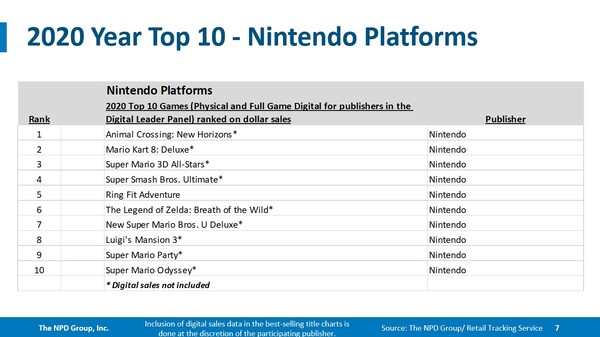 Various tidbits
- December 2020 consumer spending across video game hardware, content and accessories reached a December record $7.7B, 25% higher when compared to a year ago. Full year spending also set a new record, totaling $56.9B, 27% higher than 2019.
- Hardware dollar sales reached $1.35 billion in December 2020, an increase of 38 percent when compared to a year ago, and the highest total for a Decemeber month since the $1.37 billion achieved in December 2013.
- Annual hardware dollar sales totaled $5.3 billion, 35% higher than 2019, and the most since $5.6 billion was reached in 2011.
- Nintendo Switch was the best-selling hardware platform in units and dollars for both December and the 2020 year. Annual dollar sales of Switch hardware were the 2nd highest for a platform in U.S. history. Only the 2008 dollar sales of Nintendo Wii were higher.
- Animal Crossing: New Horizons was 2020's 3rd best-selling title, and the 6th best-selling game of December. In 2020 the title achieved the highest physical dollar sales for a Nintendo published game in a calendar year since Wii Fit Plus in 2010.
- Half of the top 20 best-selling games of December 2020 were published by Nintendo.
- Spending on video game accessories reached $546m in December 2020, 15 percent higher when compared to a year ago. 2020 spending gained 21 percent, to $2.6 billion.

Moving Out 'Moving In' update announced

Friday, 15th January 2021 – Team17, DevM Games, and SMG Studio have announced the release of the free ‘Moving In’ update to the multi-award-winning co-op game, Moving Out. The new content, which is arriving soon on consoles and PC for free, turns the game on its head and answers the ultimate question: What happens to the stuff players throw into the removals van?

Set in the world of Packmore, Moving Out’s chaotic, local multiplayer gameplay sees up to four players work together as Furniture Arrangement and Relocation Technicians (F.A.R.Ts) to move furniture efficiently and creatively from condos, offices, mansions, and more, in the fastest time possible. The ‘Moving In’ update is available in 12 of the game’s original levels and gives players the new task of unpacking the van and placing items into their new homes; it also adds a new ‘auto snap’ option to the assist mode to help players position items exactly where they’re needed.

The update also adds the option for players to customise their character’s shirts, and debuts two brand-new dance moves – The Prospector and Loveshack!

Key Features
- Couch co-op: Players can either take on Moving Out solo or enlist the help of up to three friends in local multiplayer co-operative gameplay, as they figure out how to get items into the removals van in the quickest way possible!
- Location, location, location: No move is too big, too small, or too weird. Work through sleepy suburbs, frenzied farms, haunted houses and even head into space to keep customers happy!
- Physics: Need to get a large item of furniture down some steps? Gravity is a F.A.R.T’s best friend. Glass door in the way? Smash right through it. Throwing things over railings will always be quicker than carrying them the long way around.
- Character customisation: Choose from a roster of movers from humans to anthropomorphic animals and appliances that can be tailored to suit the job at hand.
- Assist mode: Increased time limits, skippable levels and removal of dangers are just some of the options available in assist mode.
- Accessibility options: Dyslexia-friendly text, scalable user interface, and remappable keyboard controls on Steam make the Moving Out experience as inclusive as possible.