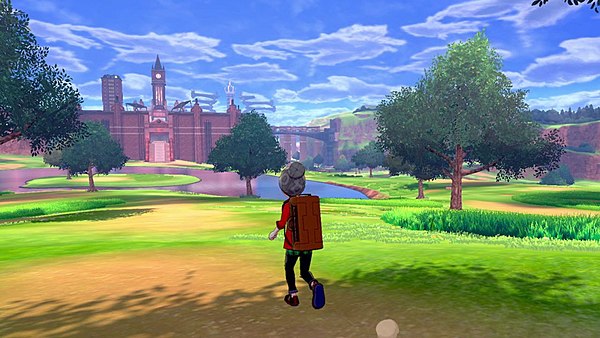 Early impressions from media outlets getting hands-on time with Pokémon Sword and Pokémon Shield seem to be very positive. Not only are impressions positive, but lots of new information on the game has been slowly coming out, including details on how large The Wild Area will be. According to sources from Metro, a representative from The Pokémon Company gave an estimate for how large the open world area really is. "Two regions from The Legend of Zelda: Breath of the Wild" is a very large amount of space for some nice Pokémon exploration.

Not too long ago, I put together a video saying I was concerned about Contra: Rogue Corps based on information from interviews, alongside gameplay footage. Following that, I played the demo and was pretty surprised to find out how much I like it. Now I've got all-new footage for you from the Switch version, complete with some detailed hands-on impressions!

We're still waiting for the sequel to Breath of the Wild, but in the meantime, Nintendo has a full remake of the classic Game Boy adventure Link's Awakening! Victor Lucas has played the first few dungeons, so here are his first thoughts on the game!

Heather got a chance to go hands on with the garden room of the upcoming Luigi's Mansion 3- Here's what she thought!

Early thoughts on our trip to Koholint
12 September, 2019 by rawmeatcowboy | Comments: 6 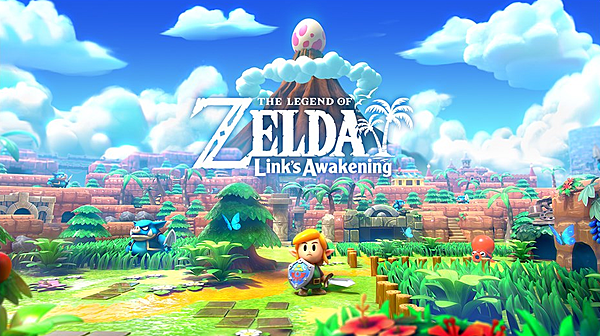 I don't know how it happened, but The Legend of Zelda: Link's Awakening is 26 years old. Okay, I know how it happened, but I'm just surprised that it's been so long. I know it's cliché, but it seems like just yesterday I was walking out of Toys R' Us with my Mom, who had just bought me a copy of Link's Awakening on the Game Boy. Now here we are 26 years later, and I'm diving back into one of my favorite Legend of Zelda games, this time with a fresh coat of paint.

Link's Awakening was always a special game for me. At the time, it certainly checked all the boxes for what made a great Legend of Zelda game to me, but there was more to it than that. The entire experience had a certain vibe to it. An element of mystery and surrealism surrounding the adventure. The rock-solid Zelda gameplay base married with that intangible special something made Link's Awakening remain a vivid memory in my mind all these years later.

The one thing that's come through loud and clear in Link's Awakening for Switch is that Nintendo also felt that spirit running all throughout the game. They recognize that it's more than just a time capsule for the Zelda franchise. Whatever came together to create the unique atmosphere has remained intact for this revamp, which is absolutely crucial to its enjoyment. This is a Legend of Zelda game that feels different, and that aspect is what makes the whole journey such an outstanding one. 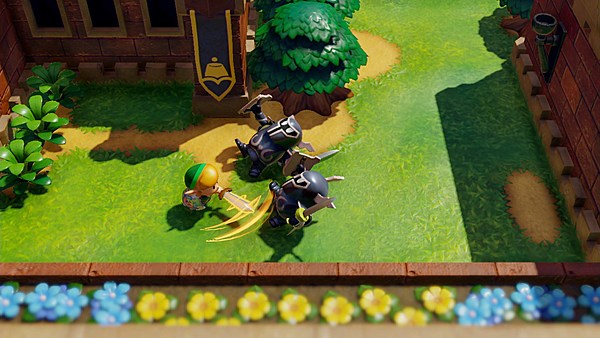 For those who have played The Legend of Zelda: Link's Awakening before, you should feel right at home with the Switch remake. It may have an absolutely gorgeous new look and high-fidelity audio, but the story beats and gameplay quirks remain the same. If you loved the game the first time you played it, you're very likely to fall in love all over again on Switch.

If you've never played Link's Awakening, I honestly can't even imagine what you'll think of the adventure. It depends on so many different aspects of your Zelda history. For example, if you've focused on 3D Zelda titles (Ocarina of Time and onward), you might feel quite restricted in the gameplay of Link's Awakening. I mean, it is a game from a bygone era, after all! It's still just as engaging as it ever was, but I can only see it from a place of having lived through the entire Zelda franchise as it released. Going from a familiarity with 3D Zelda titles only to a classic experience like Link's Awakening might be a hard sell.

With that said, I hope both older Zelda players and more recent fans alike hop in on Link's Awakening. Again, it certainly feels quaint when compared to today's Zelda's standards, but there's something to be said about that. Instead of having to hunt down a Game Boy or fire up a Virtual Console version of Link's Awakening, you can now get the heart of the experience on Switch, albeit with much prettier audio and visuals. I truly hope those updated sound and graphical elements help bridge the gap for players who might otherwise never go back to play Link's Awakening. It's a title that I believe even the slightest Legend of Zelda fan should experience. 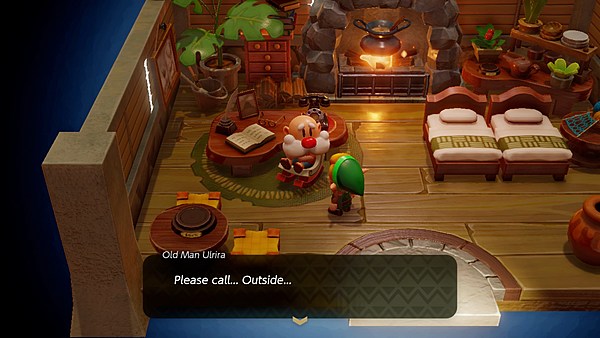 The real star of Link's Awakening is the location and its characters. Wandering around the island of Koholint will introduce you a cast unlike any other Zelda game. There are some straight-up weirdos to deal with along the way, and I mean that as a compliment. A talking crocodile, a lady who loves Chain Chomps, an old man who's so shy he only speaks by phone, and so many other zany characters will come across your path. Almost everyone feels slightly...off in a truly endearing way. It's the strange overtones to these characters that deepens the intoxicating nature of the experience.

On the traditional side of things, gameplay mechanics retain the classic approach of overworld exploration, dungeon, repeat. It may seem antiquated to some, but I find it to be as entertaining and addictive as it ever was. What's surprising is that 26 years later, the dungeon design still feels great. Dungeon layouts remain engaging, puzzling, and overall smartly-designed. It's honestly surprising to see just how well the dungeons hold up. This ties into a really great sense of dungeon progression, with the first being extremely straightforward, and subsequent dungeons expanding in some interesting ways.

My time with Link's Awakening on Switch has been a nostalgia-fueled love affair so far, and I'm sure that feeling will continue on. I have a good amount left to do and see, and I honestly can't wait to tackle it. Up to this point, Nintendo has once again shown that they really know how handle a remake. It seems to be the perfect blend of reworked elements that still respect the source material. That's a very thin line to walk, and Nintendo is doing it with nary a misstep. 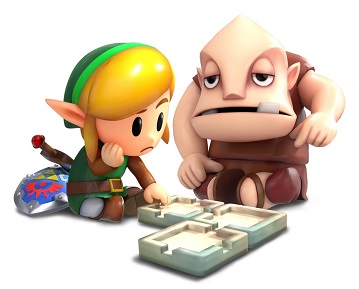 We'll be back next week with our full review for The Legend of Zelda: Link's Awakening. Hopefully our preview has whet your appetite for what's to come! If you need a little bit more to hold you over, you can check out our video coverage below! It includes nearly 10 minutes of brand-new gameplay, as well as more of my thoughts on this remake, and Link's Awakening in general.

Assemble your ultimate team of Marvel Super Heroes from a huge cast including the Avengers, Guardians of the Galaxy, X-Men, and more! Team up with friends to prevent galactic devastation at the hands of the mad cosmic tyrant Thanos and his ruthless warmasters, The Black Order. Then expand your ultimate alliance with the paid Expansion Pass, which includes upcoming DLC content from popular franchises like the Fantastic Four, X-Men, and Marvel Knights.

Which characters are my favorite?
17 July, 2019 by rawmeatcowboy | Comments: 0

I've been spending time with the final version of Marvel Ultimate Alliance 3: The Black Order, and I'm having a blast so far. Following embargo restrictions, I'm allowed to show off some gameplay, and offer up impressions. In the video above, check out some of the teams I've assembled, and see which characters I've enjoyed the most. 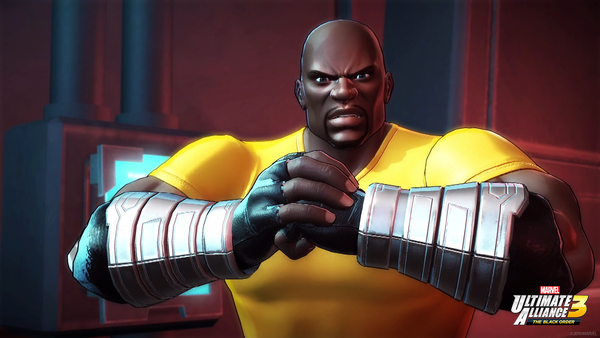 Some of you might know that at the beginning of 2019, I made it my mission to catch up on every single Marvel movie. I had seen Dr. Strange, and that was it. I felt like I missed out on something big, and I wanted to get in on the fun before Avengers: Endgame came out. That decision to watch those films would take me down a path of comic book collecting in general, and a newfound appreciation of the entire comic book industry. I now consider comic books to be one of my main hobbies, and I couldn't be happier.

This interest in all things comics also bumped up my excitement from Marvel Ultimate Alliance 3: The Black Order in a big way. I had played the previous Marvel Ultimate Alliance games, but as someone who had next to no knowledge of the Marvel universe. I definitely had my fun, but I felt I was missing out on a huge portion of the experience due to my lack of connection with the characters and universe. Now with the third title, I'm fully immersed in comic books, and I have much deeper understanding of what's going on.

Not that long ago, a collection of Famitsu columns from Masahiro Sakurai was released. Fans have since picked the book up and pored over its contents. Below you can find a summary of the more interesting details.

- Sakurai doesn't think characters like Goku, Shrek, and others don't make sense for Smash Bros.
- Smash Bros. is not a series where he thinks about continuation, so characters aren't held back, and DLC doesn't impact the next game
- Sakurai sees Smash as a party game and would like things to be more casual
- Sakurai also recognizes that he's not the only one who can interpret what the series can/cannot be
- back in the Wii U/3DS days, there were restrictions on how many updates to a game you could do
- updates are normal these days, but they're a bit of a voluntary service
- Sakurai thinks its important to hear feedback from a large variety of players, including newcomers
- no plans for a Smash Ballot again
- Sakurai was making plans for Smash Ultimate while on vacation
- Sakurai treats a characters personality as a game in and of itself
- characters joining Smash has an advertising effect, even if the characters appear in games that aren't on Nintendo platforms
- Sakurai played a beta of Breath of the Wild in 2 days to get a feel for its inclusion in Smash Bros. Ultimate
- Sakurai feels games shouldn't be created based on market research alone
- Sakurai feels games made to imitate other games is unfortunately
- 60 billion yen is enough to make every Smash game up to Ultimate
- Sakurai would like a Smash Bros. area in Super Nintendo World
- Smash Ultimate's DLC was planned without the developer's input
- DLC development takes time, and DLC business is far more risky than most think
- gathering staff to create new DLC is tough
- Sakurai isn't fond of season pass DLC
- Omega battlefield variants take more time than people think
- HAL is credited, but not involved in development anymore
- the team was very careful to avoid leaks during E3 2018
- the story idea of World of Light has existed since Brawl
- the idea of Spirits was a last resort, and Sakurai isn't sure this idea will return
- there was a plan to include a Spirits-like map in Melee
- Sakurai doesn't follow internet reactions and doesn't know of fan predictions
- Sakurai took a long vacation, but can't travel far as he has a cat
- by March 2019, the online win ratio is very close for all characters