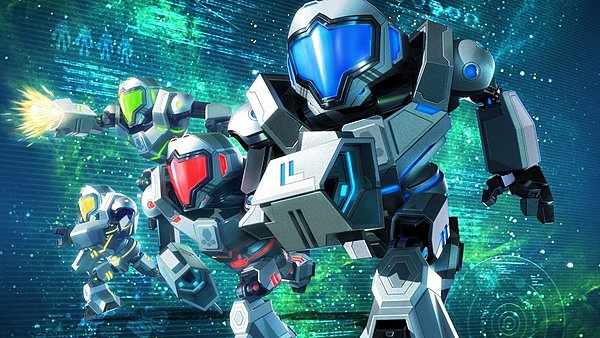 The sales for My Nintendo members this month have been revealed in Europe. Check out all the discounted 3DS titles in the list below.

Metroid Prime: Federation Force wasn't exactly met with a warm welcome from Nintendo fans. The game was bashed from the moment it was revealed all the way up to launch, and was largely ignored by consumers. Nintendo of Canada communications manager Andrew Collins feels the game got a bum rap, and spoke about it to Electric Playground.

“It was a great package. You had Blast Ball, which was this really interesting 3-player, sci-fi football. Then you also had Federation Force, a separate game itself which was this 4-player bounty hunter game, and it’s a shame because… because it didn’t feature Samus, fans were very very critical. Samus appears a tiny bit much later into the game. And so because of that, it was seen ‘we don’t want this version, get rid of it, and give us the one that we want.’ And it’s unfortunate for Federation Force because it got a bad rap, it wasn’t the game which people felt it was.” For those in Japan and North America looking to squeeze as much excitement possible from Metroid Prime: Blast Ball, your days are numbered. Nintendo has announced that the game's online servers will be taken offline on Dec. 31st, but local multiplayer will still function. As for the version of Blast Ball in the full retail version of Federation Force, that will continue without disruption. Enlist with a best-of-the-best military unit and protect the galaxy by any means necessary in Metroid Prime: Federation Force, out now exclusively on Nintendo 3DS family systems. Band together with marines nearby or online* to take on action-packed co-op missions for up to four players in an all-new first-person-shooter set in the Metroid universe.

In this sci-fi adventure, you’ll sign up with the Federation Force, an elite group of marines hand-picked by the Galactic Federation to pilot specialised battle armour known as Mechs. Your objective? Stamp out the nefarious Space Pirate menace once and for all, and bring peace to the cosmos. You can learn more about the story, discover how amiibo can give your Mech a fresh new look, and watch a full Mission Briefing at our official Metroid Prime: Federation Force gamepage.

Alone or with comrades via Local Play or online*, you’ll go planet hopping across the desolate Bermuda system to investigate strange goings-on in objective-based missions for up to four players. Explore hostile worlds, infiltrate enemy-infested strongholds, solve environmental puzzles and do battle with vicious alien life forms, all while staying hot on the heels of the relentless Space Pirates. Enhance your Mech’s armour and abilities with powerful MODs, and divide special AUX ammo between team-mates to supercharge your assaults and give crucial support mid-mission.

When you want to take a break from saving the galaxy, climb aboard your Mech and buckle up for a few rounds of Metroid Prime: Blast Ball, a futuristic sport that blends the end-to-end action of football with mechanised mayhem and power-ups aplenty! Go head-to-head in adrenaline-pumping, 3-on-3 multiplayer matches – team up via Local Play, take the rivalry online* or play alone with computer-controlled opponents. You can now learn the ropes with a free version of Metroid Prime: Blast Ball*, available to download from Nintendo eShop.

Fight as one, survive as a squad in Metroid Prime: Federation Force, out now only on Nintendo 3DS family systems.

Thanks to KirbyGCN for the heads up!

GameSpot's The Lobby - Is Metroid Prime: Federation Force Any Good?

On 8/26 from 6-8PM receive an exclusive poster during our Metroid Prime: Federation Force event @ #NintendoNYC! pic.twitter.com/KsZkYIcVfp

Looks the event yesterday was the only place you could grab this poster. We'll keep our eyes peeled for any other locations that dish this sucker out.