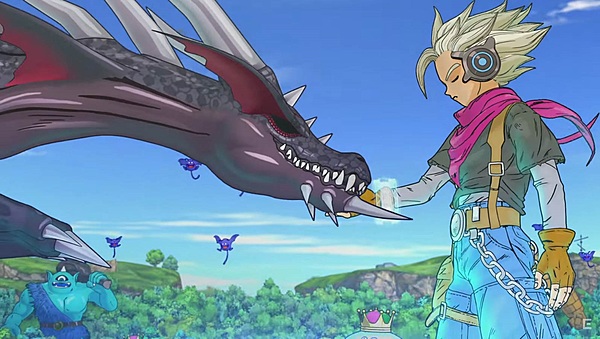 Those who have Dragon Quest Monsters Joker 3 Professional can hop online today and receive 12 free monsters. You can check out some screens of the monsters here.

Dragon Quest Monsters: Joker 3 Professional - another round of footage Windyo is an Sacred Beast with the body of a child-like, white tiger. It mocks enemies with quick movements and manipulates its specialty wind to blow away its opponents.

Freysha is an Sacred Beast that gives off the impression of an owl. You wouldn’t be able to guess from its cuteness, but it can manipulate powerful flames.

Gaogaia is an Sacred Beast that gives off the impression of an innocent bear. However, once it enters battle, it overwhelms its enemy with unyielding power and rock techniques.

Ackle is an Sacred Beast that resembles a turtle and is covered in a protector-like shell. Not only does it offer solid protection, it also specializes in attacks that manipulate water.

■ Unleash the True Power of the Sacred Beasts

By synthesizing the Sacred Beasts, they can evolve into stronger forms. It is unknown just what kind of power is hidden within those that achieve growth, but it will certainly help the player who aims to become the number one monster master.

Emperor Windyo is a Windyo that achieved majestic transformation. Perhaps it is the fate of those with power, it appears he has to face against the crisis of Break World, but…

War Emperor Ackle is trying to rush towards where his friends are. What will happen when the Sacred Beasts get together?