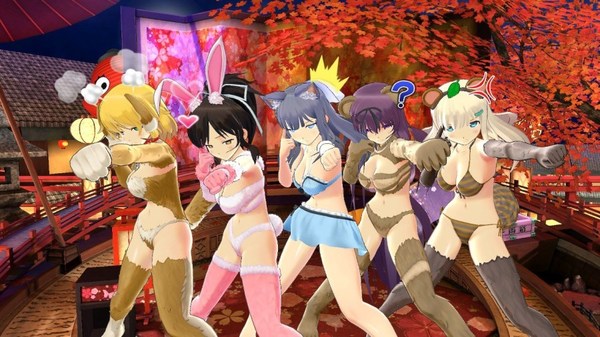 The DLC releases end with a slam tilt! The Busty Special DLC Set brings the Secret Haunting Ground Girl and Wonderland Showgirl outfits, with matching Showgirl accessories, two diorama poses, and new Peach Balls for all five shinobi for $14.99. Outfit Sextet 1 and Outfit Sextet 2 round out the final collection at $9.99 each. The BGM DLC packs allow players to use music from previously released SENRAN KAGURA titles, including Deep Crimson, Estival Versus, Peach Beach Splash, and Shinovi Versus, for $4.99 each. Expand the shinobi girls’ wardrobe with a quartet of brand-new outfits for $11.99, and with a quintet of new accessories for $2.99. Lastly, explore your artistic side with a set of five never-before-seen diorama poses for $2.99. For more information about SENRAN KAGURA: Peach Ball DLC visit: http://www.skpeachball.com/ or the Nintendo eShop.

SENRAN KAGURA Peach Ball is developed by HONEY∞PARADE GAMES, Inc. and was published by XSEED Games for Nintendo SwitchTM in North America and Europe by Marvelous Europe on July 9. The title is available digitally in the Nintendo eShop and in a limited physical release available at XSEED Games’ online store and select retailers for $39.99. This title is rated "M for Mature” by the ESRB on Nintendo SwitchTM. A PC version is in development for a summer release, with more details to be announced at a later date. 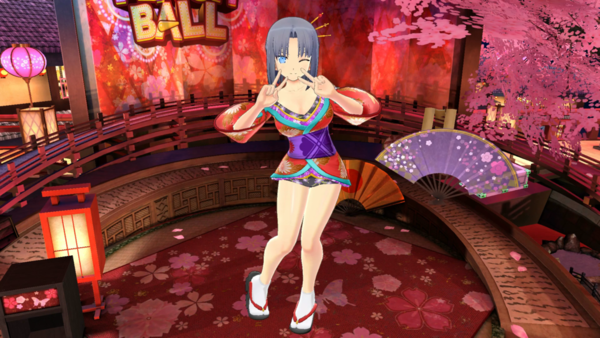 Senran Kagura: Peach Ball is now out on the Switch in the states, and if the main game doesn't pack enough content for you, get ready for a big wave of DLC. Marvelous has detailed the entire DLC plan, which you can find below.

*Price may vary depending on the Nintendo eShop region.

SENRAN KAGURA has transformed into a sexy pinball game on the Nintendo Switch! Bounce your ball along the curves of a crazy theme park, starring a ninja girl who thinks she's an animal! (Yep, you heard right!) ♪

Have a look at Senran Kagura: Peach Ball's retail packaging

Senran Kagura: Peach Ball is soon to release, and some pics of the retail package have popped up. XSEED and Marvelous have put together a very nice physical version, complete with a full-color instruction booklet. It's always nice to see a publisher go the extra mile! 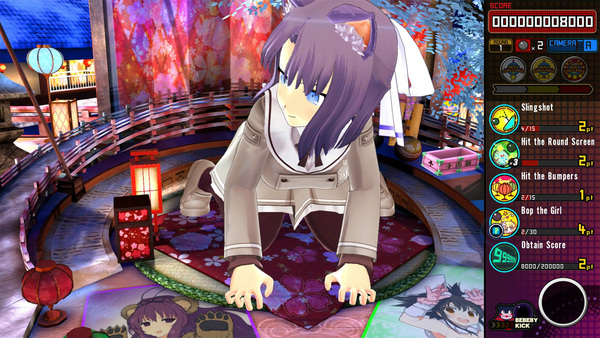 Senran Kagura Peach Ball, the "sexy pinball game," is now available to preload on the Switch eShop. The title is priced at $40, and takes up a rather surprising 5.3 GB of space. 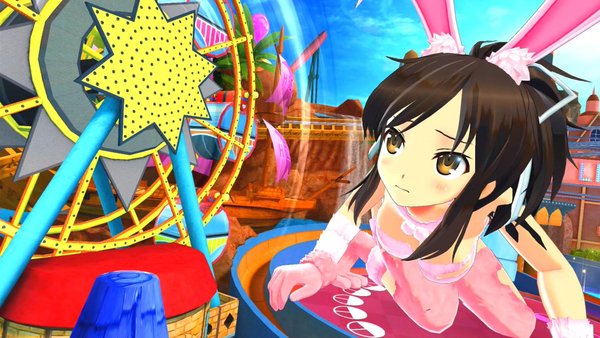 Tunbridge Wells, England – 18th June 2019 – Flex your flipper fingers and prepare for some SENRAN KAGURA style pinball-fuelled fun in SENRAN KAGURA Peach Ball, launching digitally on the 9th July 2019 within Europe and Australia. The game is now available to pre-purchase from the Nintendo eShop on the Nintendo Switch.

Available to pre-purchase for £35.99 (UK), €39.99 (Europe) and $60.00 (Australia) on the Nintendo eShop this localised release of SENRAN KAGURA Peach Ball combines the base game, playable in Japanese with English and French text localisation, with the Accessories Galore Set to offer a more expansive customisation experience for SENRAN KAGURA fans.

The Accessories Galore Set, which was originally sold separately as additional downloadable content in Japan, adds an additional thirty accessory items to the game and further expands the customisation options used in the ever-popular Dressing Room.

This latest entry into the busty-genre-spanning franchise sees Asuka, Yumi, Murasaki, Ryona and Yomi accidentally turned into animals as a result of Haruka's latest acts of mischief. In order to restore our favourite shinobi-in-training to normal the mysterious Peach Ball has to be used; and coincidentally it all fits within a pinball machine.

This localised release of SENRAN KAGURA Peach Ball will be presented in Japanese with English and French text localisation as well as feature the same content as the original Japanese release, including fan-favourites such as Intimacy and Diorama Modes, as well as playful pinball fun in both the games expansive Story and Free Play modes.

Ninja battles, rhythmic cooking contests, water gun fights, massage therapy — what new horizons hasn’t the SENRAN KAGURA series conquered yet? Oh, right: pinball! Use the flippers to bounce the magical Peach Ball all around one of several dynamic tables, with a beloved shinobi girl in the middle of it all. Bounce the ball off her knees, feet, or hands to make her shift position and raise the stakes!

Sakuna: Of Rice and Ruin – The resourceful harvest goddess Sakuna spreads her magic and charm to the Nintendo Switch™ system, alongside the previously announced PlayStation®4 computer entertainment system and PC versions. As the sole developers at Edelweiss, Director Nal and CG Artist Koichi will be granting media interviews at E3 for the first time in support of their action-farming simulation hybrid title.

Heroland – Part-time heroes wanted! A sinister plot is uncovered and the fate of the theme park (and the world!) is in the hands of Lucky the tour guide, a spoiled prince by the name of Elric, and a ragtag band of tourists-turned-heroes. This highly customizable comedy RPG, complete with classic Active Time Battle-style combat, will be playable in English for the first time at E3 2019.

BurgerTime Party! – The retro action classic returns with a fresh look for Chef Peter Pepper and his Food Foes. This arcade-style platform puzzler offers up quick-serve gameplay, a wide menu of features, and more than a hundred mouthwatering stages. The food fight begins at E3 with up to four players in the new multiplayer mode!

Additionally, Akiba’s Trip: Hellbound & Debriefed will bring the golden era of Akihabara with a supernatural spin to E3, with HD graphics and a rebuilt game engine to bring the original Akiba’s Trip game to PS4™ system and PC. In Rune Factory 4 Special for Nintendo Switch, players will experience the legendary fantasy adventure in a fully remastered form with HD graphics. In SENRAN KAGURA Peach Ball for Nintendo Switch, players will experience pinball in a way never before imagined. Collectively, XSEED Games will be bringing gamers six enticing offerings across multiple platforms, three of them coming to PC, three to PS4™ system, and five to Nintendo Switch…plus one more mystery title yet to be revealed.

This enthralling title from Edelweiss, the two-man team behind acclaimed indie darling Astebreed (2014 in NA and EU), Sakuna: Of Rice and Ruin combines side-scrolling action with deep crafting and farming simulation. Players take on the role of Sakuna, a spoiled harvest goddess banished to a dangerous island with a group of outcast humans. As she explores the beautiful, forbidding environments of the island, she will also find a home in a mountain village, proving herself worthy of her title by harvesting rice and bettering the lives of humans. In addition to being a fresh take on Japanese mythology and a love letter to action games, Sakuna: Of Rice and Ruin is an ode to rice and an engrossing simulation of the craft behind the agriculture.

Created by Edelweiss and published in North America by XSEED Games, Sakuna: Of Rice and Ruin is currently in development and will launch this winter.

Take a trip back to the origin of a series that will knock more than just your socks off! In Akiba’s Trip, players expose vampiric creatures called Shadow Souls to deadly sunlight by liberating them of their clothes. Now, a fully remastered version of the original "Strip Action RPG" is coming to the West for the first time. Following the success of Akiba’s Trip: Undead & Undressed, which was released as Akiba’s Trip 2 in Japan and has sold over 500,000 copies worldwide, Akiba’s Trip: Hellbound & Debriefed completely rebuilds the first title in a modern engine, bringing back the beat-'em-up, strip-'em-down gameplay fans know and love while accurately rendering Akihabara, Japan's geek paradise, from circa 2012 in glorious HD.

Developed by Acquire Corp. and published in North America by XSEED Games, Akiba’s Trip: Hellbound & Debriefed is in development with the launch date to be announced at a later time.

Put on your nostalgia goggles for this single-player RPG about a theme park where guests can explore dungeons, beat up baddies, and become legendary heroes—while the player assists from the sidelines as a tour guide! Released in Japan as WORK x WORK, this tale of princes and pixels is told by over 20 quirky characters, including overzealous knights, an irascible otter, and... *checks notes* man-eating broccoli? When the Dark Lord's monsters are also your coworkers, it's hard to draw the line between work and play! Directed by Takahiro Yamane (Fantasy Life), written by Nobuyuki Inoue (Legend of Mana), set in a colorful 2D world created by Nobuhiro Imagawa (MOTHER 3, Legend of Mana), and jam-packed with Tsukasa Masuko’s (Shin Megami Tensei) whimsical tunes, this adventure is one that cannot be forgotten!

Developed by FuRyu and published in North America by XSEED Games, Heroland is in development for a 2019 launch.

Chef Peter Pepper and the Food Foes return to serve up a fresh look and tons of new gameplay in this tasty reimagining of Data East's 1982 arcade classic! After firing up the grill for some action, new modes and items will have modern chefs thinking outside of the bun to solve bite-sized puzzles like crumbling floors, oil spills, and freezing ladders, all while evading edible enemies both old and new. Local multiplayer lets 2-4 friends cooperate as cooks or compete as cuisine across 100+ stages that will keep the fun from getting stale long past Mr. Hot Dog's expiration date. Now, let's get cooking!

Developed by G-Mode and published in North America by XSEED Games, BurgerTime Party! is in development for a Fall 2019 launch.

Experience the world-famous fantasy farming adventure like never before, with HD graphics in fully remastered form. The joys of growing crops, catching fish, and raising monsters await players old and new, while seasoned explorers will be delighted to discover an updated opening movie. Other farm-fresh features include Newlywed mode, which introduces special episodes about living the married life and new in-game cutscenes. Additionally, an even higher difficulty mode for expert players to take on a challenge that's truly worthy of their skills.

Developed by Hakama and Marvelous Inc. and published in North America by XSEED Games, Rune Factory 4 Special is in development for a 2019 launch.

The genre-spanning SENRAN KAGURA series takes on a new challenge: Pinball! Work as an assistant to Haruka as she tries to cure her fellow shinobi with the mysterious powers of the Peach Ball after they are exposed to an experimental substance that drives them absolutely wild. Plunge into this new adventure and flip, bump, spin, or ricochet the Peach Ball to return the shinobi to their normal selves. With customizable tables, special minigames, a full story mode and the return of fan-favorite features including Diorama Mode and the Dressing Room, this is one of the hottest pinball games yet.

Developed by HONEY∞PARADE GAMES, Inc. and Marvelous Inc. and published in North America by XSEED Games, SENRAN KAGURA Peach Ball is launching on Nintendo Switch on July 9, 2019. A PC release will follow later this summer.

Moreover, XSEED Games will make a grand new announcement in the coming days, to further share its E3 line up plans. 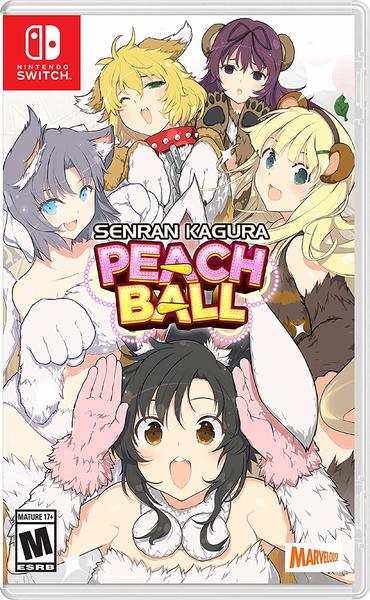 Ninja battles, rhythmic cooking contests, water gun fights, massage therapy - what new horizons hasn't the SENRAN KAGURA series conquered yet? Oh, right: pinball! Use the flippers to bounce the magical Peach Ball all around one of several dynamic tables, with a beloved shinobi girl in the middle of it all. Bounce the ball off her knees, feet, or hands to make her shift position and raise the stakes!

Thanks to JPSwitchMania for the heads up!
Source: link
Rating: 5