Dead Cells is known for its frantic, exhilarating gameplay. Mix that with the insane abilities of the speedrunning community, and it's quite a sight to behold. Watch as three key members of the development team for Dead Cells watch and react to not just one, but two incredible playthroughs of their game from speedrunner: Evian. First, Evian blasts through the game with a completely fresh save file, then he kicks it up a notch by then completing a run on the hardest difficulty Dead Cells has to offer. Ride along with Motion Twin as Evian shows us all how it's done! 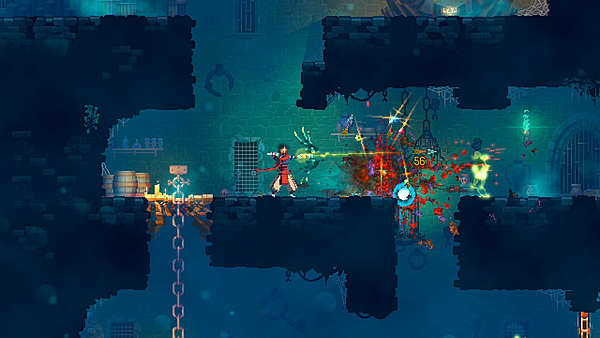 Dead Cells has been updated to Version 1.8.5. Check out the patch notes for this update below.

- Translation included for all langages.

- The Beginner's Bow and the Old Wooden Shield are no longer "side hand only".

- Fixed Conjonctivius interaction with freezing (platform staying out, etc.)
- Fixed "on destroy" affixes appearing on the Swarm.
- Fixed the obtention of the White □□□□ Outfit being conditioned by having unlocked the regular □□□□ Outfit in a previous run. Now just wearing the regular outfit is enough.
- Fixed various crashes. I won't tell which one so if the game crashes you won't be able to blame me. 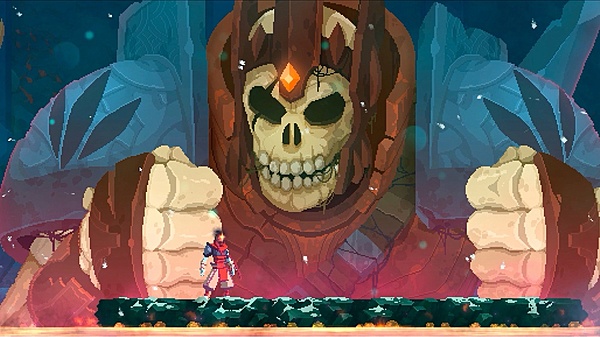 A complete edition of Dead Cells including both Rise of the Giant and The Bad Seed DLC is now available on the Japanese eShop thanks to publisher Motion Twin. This is pretty much the definitive version of the game, and it can be purchased right now for ¥2,850. 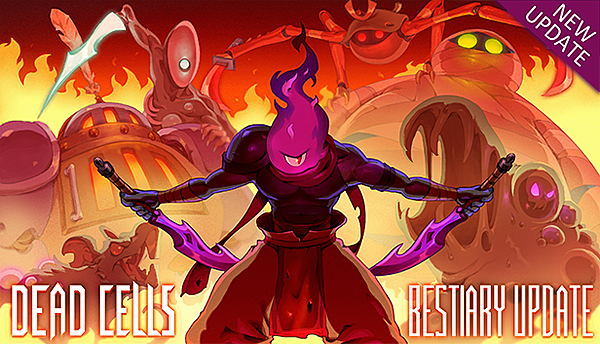 Dead Cells fans have several new enemies standing in their way today (alongside a myriad of new content updates) as the Bestiary Update is now live on PC with consoles to follow next month from Motion Twin and Evil Empire.

Fans are also treated to a whopping ten new achievements - with eight of them related to The Bad Seed DLC. Classic achievements are also now available and also secret, so there.

Three new starred affixes including oil and fire spreading around when a deployable trap is destroyed, pushing enemies around you when the effect of hte used active ends and extended duration on powers like Wings, Crow and Smokebomb

Portable Door: allows you to bring a door with you (covering your back while you take care of the mobs in front of you and allowing for an elegant stun effect when you decide to turn around)

The Bad Seed addition from earlier this year has received new lore rooms and secrets for the Arboretum and the Morass, as well as new mobs to re-balance the bestiary of the level.

Two are linked to the secrets and lore of The Bad Seed DLC, and one is available for everyone that can rise up to the ultimate challenge.

The full and dreadfully long list, including balance changes, can be found at https://dead-cells.com/patchnotes. 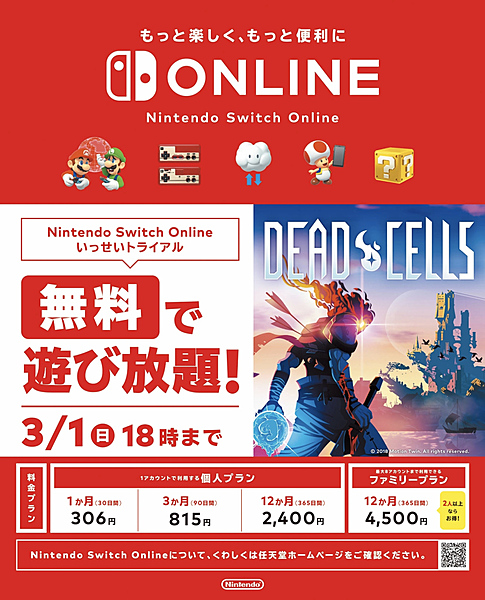 As we covered earlier, from February 24th to March 1st, 2020 in Japan, Switch Online subscribers will be able to play Dead Cells as much as they'd like for free. Even better, the game is being sold at the discounted price of 1,736 yen until March 8th, 2020. The print ad above is making sure all Famitsu readers know what's up. 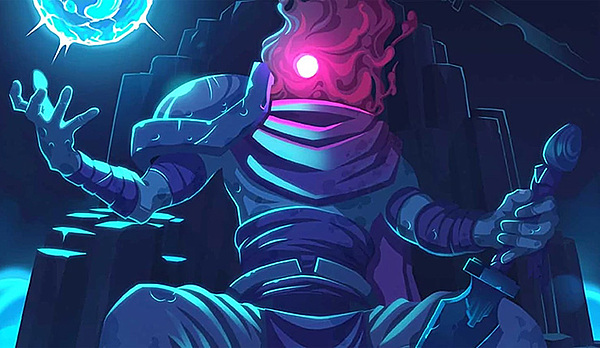 Motion Twin included a pretty unique feature in Dead Cells that they called the Legacy update. That update allows players to go back and play previous versions of the game. If players have a favorite sweet-spot in the game's update history, they no longer have to worry about that experience disappearing. This lets Motion Twin continue on with the tweaks and changes, all while the playerbase can stick with the update they enjoyed most.

Motion Twin shared a bit of info on how the Legacy update makes their lives a lot easier, which you can see below.

In the past, we worried about making sweeping changes to Dead Cells. That’s not to say we didn’t, as anyone upset about balance passes or legendary drop rates can tell you. Major updates were stressful though, especially ones we thought might fundamentally alter the game or prove contentious. Should we make the “right” choice for Dead Cells, even if in doing so we made a lot of our players angry? (See: The hornet’s nest we kicked over by locking achievements for certain custom mode setups.)

The Legacy Update doesn’t completely remove that stress, but it does diminish it. Players are no longer shackled to our vision, which in turn means we can experiment with elements of Dead Cells that before seemed untouchable—or at least volatile. There’s a creative freedom that comes from knowing any change we make can be easily reverted by naysayers.

We check out the latest DLC for Dead Cells The Bad Seed. Here we explore both of the new areas The Morass of the Banished, as well as the Dilapidated Arboretum. In addition, we try out the new Mushroom Boi weapon, and even take on the new boss Mama Tick. Dead Cells The Bad Seed releases for PlayStation 4, Xbox One, Nintendo Switch, and PC on February 11.

The new DLC for the heavily lauded Dead Cells game, The Bad Seed, is the seventeenth update to the game but does not alter the critical path for players still looking to conquer the main storyline of the game. Rather, The Bad Seed introduces players to an additional path to take, sporting all-new optional biomes, granting them incredible new weapons, and sticks them in front of really dangerous and possibly questionably hard but definitely gross new enemies.

With two new biomes inhabited by their own distinctive bestiary, The Arboretum, a lush paradise to deceivingly adorable creatures, and The Swamp, where an overgrown arboreal settlement inhabited by ambushing blow gunners and spear wielders is your only escape from the gargantuan purple ticks that reign uncontested on the ground. Bleh.

Triumphing over the numerous perils means you will be rewarded with a conceptually unique armoury, including the first double slot weapon as well as a very dedicated and loyal mushroom companion. Of course, vengeance visited upon the monsters and conquering the challenging new biomes that once slowed you down is its own reward, but a few new weapons never hurt anybody.

Finally, the tin contains either a PlayStation 4 or a Switch copy of Dead Cells – Action Game of the Year (containing the game, a bonus artbook and keyring) together with a platform specific digital code allowing access to the new The Bad Seed DLC.

Dead Cells – The Prisoner’s Edition will be released on June 23rd for PlayStation 4 and Nintendo Switch priced at $109.99.

Winner and nominee for dozens of Game of the Year 2018 awards, Dead Cells is a critically-acclaimed roguelike metroidvania action platformer set within an unpredictable castle packed with dark secrets, game changing items and hordes of deadly beasts. Players face tough risk-reward decisions, building their loadout from an incredibly diverse arsenal of weapons and abilities in the hopes of dodging the castle’s omnipresent threat of permadeath. A steady series of post-launch updates addressing fan feedback has evolved Dead Cells, keeping its action-centric adventure as surprising as it is rewarding.

Behold Dead Cells' furious, headless protagonist in all its animated glory in this The Bad Seed DLC launch trailer ahead of the February 11 release date on Xbox One, PS4, PC, and Nintendo Switch.

Explore a relaxing Arboretum, wade through a noxious Swamp and take on a new boss in this new early game content designed to expand the Dead Cells universe and add variety to runs for people who want to support the development of the game.

- The Arboretum: A relaxing and peaceful greenhouse inhabited by a peaceful clan of mushrooms, with an understandable desire to murder the Beheaded.
- The Swamp: A noxious environment ruled by a band of tree dwelling mutans with pointy sticks, sneaky dart shooting frogmen and a bunch of deadly bloodsuckers.
- The Nest: Domain of mama tick, if you’ve seen a certain sci-fi movie with "the brain bug", you get the idea...

The two new levels and their monsters are alternatives to The Courtyard/Toxic Sewers and The Ramparts/Ossuary/Ancient Sewers, with the boss designed to be on par with The Concierge, so hopefully it’ll spice up your early game runs once you’ve played through the core game.